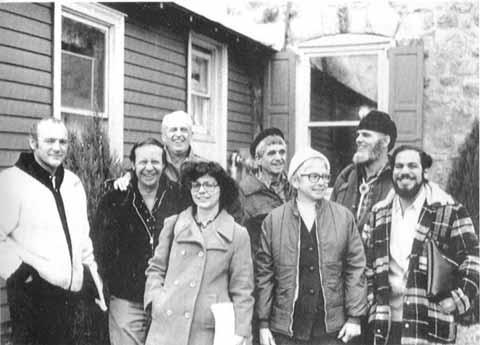 While imprisoned after his 1967 Baltimore 4 action, Philip Berrigan, in his Prison Journals of a Priest Revolutionary, wrote:

When a people arbitrarily decides that this planet and its riches are to be divided unequally among equals, and that the only criterion for the division is the amount of naked power at its disposal, diplomacy tend to be essentially military, truth tends to be fiction, and the world tends to become a zoo without the benefit of cages. And war tends to be the ultimate rationality, because reason has been bankrupted of human alternatives (5).

Post-Vietnam, the American political, economic, and militaristic landscape described by Berrigan had worsened. The “naked power” of the United States now included an arsenal of 30,000 nuclear warheads and a first-strike policy. On September 9th, 1980, Berrigan and seven others said a decisive “NO!” to nuclear madness by entering the General Electric Re-entry Division in King of Prussia, Pennsylvania.  Along with Philip, Fr. Daniel Berrigan (his brother), Sr. Anne Montgomery, Elmer Maas, Molly Rush, Dean Hammer, Fr. Carl Kabat, and John Schuchardt hammered on two nose cones of Mark 12A warheads, poured their own blood on warhead documents and order forms, and prayed for disarmament and peace. With this act, the first of over 75 Plowshares disarmament actions came into being. The “Plowshares disarmament movement” is now international in scope. Many of its activists, who understand that waging peace has its price, have served a substantial amount of time in prison.

Art Laffin, a lifelong Plowshares activist and community member of the Dorothy Day Catholic Worker House in Washington, DC, speaks to what Plowshares activists hope to communicate through their actions in his introduction to Swords Into Plowshares: A Chronology of Plowshares Disarmament Actions:

…[there is an] underlying faith that the power of nonviolent love can overcome the forces of violence; a reverence for the sacredness of all life and creation; a plea for justice for victims of poverty, the arms race and economic sanctions; and acceptance of personal responsibility for the dismantling and physical conversion of the weapons; and a spiritual conversion of the heart to the way of justice and reconciliation (3).

In this same introduction, he explains why hammers and blood are or have been used in Plowshares actions. Hammers are used to begin the literal dismantling of weapons that rounds of “peace” talks have failed to do. They are also used to symbolize the “building again” process, e.g., a hammer can be used to build homes and hospitals. Blood clearly points to the blood that is spilled so carelessly in war. It is also an essential component of life, which points to our need for one another and our unity as one people.  In their nonviolent actions and their acceptance of responsibility for their actions, Plowshares activists are those who accept suffering rather than to impose it upon other people, as is done, for example, in the waging of armed conflict.

While commemorating thirty years of resistance to nuclear weapons at the Y-12 nuclear weapons plant in Oak Ridge, TN, this past July, John Schuchardt reflected upon the first days of the Plowshares 8, “We would never be thinking about starting a [Plowshares] movement,” he said. “This was a humble, simple human action by a few people who met and prayed and studied the scripture together, spent time together for about nine months and, of course, talked about the practical, logistical aspects.” Daniel Berrigan, in his foreword to Swords Into Plowshares: A Chronology of Plowshares Disarmament Actions, writes of how community members struggled to name themselves and their action:

We were locked in a dilemma, eight of us, as summer tipped into the fall of 1980. We had met for months of prayer and discussion. But try as we might, one matter escaped us. What to name our newborn resolve (or better, our not-quite born resolve?)

… According to our Bible, the ‘name’ must go beyond itself, mean something, connect. It must evoke a tradition, a vocation, a task in the world – a gift (even a wildly difficult one!). It must hint at community desire, passion, hands-on conscience…

What most Americans took horridly for granted as ‘normal’ – nuclear weapons studding the earth like the sores of Job, the Pentagon squatting monstrously on the land, brooding, hatching its hellish eggs, its invasions, bombings (add in the year 2002 a plague of depleted uranium, sanctions throttling the Iraqi children). Quite simply, these could not be taken as ‘normal’ acts of a civilized people…

We knew it in our bones. That as yet unnamed ‘name’ of our action must echo the primordial nay.

On that late summer day, 1980, a momentous breakthrough occurred. It came as I recall, through Molly Rush, grandmother [and] founder of the Thomas Merton Center in Pittsburgh. At her suggestion, we opened our Bibles and took a close look at Isaiah 2: ‘They shall beat their swords into plowshares’ … (ix-x).

Sr. Anne Montgomery, who at 83 years of age has recently been indicted for her participation in the 2009 Disarm Now action, her sixth Plowshares action, writes beautifully of the communal process that helps one to prepare for such an action. In “Divine Obedience,” a chapter included in the book, Swords Into Plowshares: Nonviolent Direct Action for Disarmament, she notes:

…we begin our process with community prayers, reflection, and decision making; we try to reach a harmony, deeper than differences in philosophy and style, that will maintain our spirit through the trial and prison processes, which often require reaching consensus under difficult conditions. To make our prayer and action one, to reach out to the ‘other’ in a personal way, requires that we emphasize depth and relationship rather than numbers and high-powered organization … In such communities we can learn the true meaning of ‘conspiracy’: ‘breathing together’ the Spirit of life and beige formed by it into people faithful to the covenant of love — the law written in our hearts (27-28).

When Molly Rush walked into the GE nuclear weapons plant in September of 1980, she hammered on a warhead nose cone and “put a hole in one and a dent in another. And, I thought, these things are as vulnerable as we are, and we can undo what has been done. That was an amazing moment.” For thirty years now, Plowshares activists have refused to accept the “nuclear way of life,” a way of life that demands trillions of dollars and, potentially, millions of lives.  With courage and conviction, daring and imagination, love and patience, they have risked everything to say, quite clearly, “another way of life is possible.  We can undo what has been done.”

Mary Anne Muller is an adjunct theology professor at St. John's University and St. Peter's College, and a member of the Kairos Community. Anna Brown teaches political science and is the Director of the Social Justice program at Saint Peter’s College. She is a member of the Kairos community, Witness Against Torture, and the Garden State-Los Amates (El Salvador) Sister Cities Program. She can be reached at: ajbspc[at]comcast.net.

The Plowshares Eight: Thirty Years On