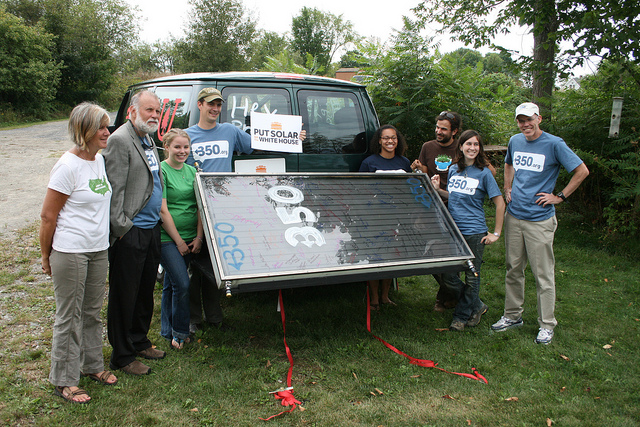 Earlier this week, environmental activist and writer Bill McKibben traveled with several students from Unity College in Maine to Washington DC to return one of the infamous Carter-era White House solar hot-water panels to its rightful owner. Unfortunately, Obama’s staffers weren’t interested. Instead they gave the students some bluster about their own green initiatives and a copy of the endlessly exciting 2009 memorandum from the vice president on federal energy plans. According to McKibben:

“They refused to take the Carter-era panel that we brought with us and said they would continue their deliberative process to figure out what is appropriate for the White House someday. I told them it would be nice to deliberate as fast as possible, since that is the rate at which the planet’s climate is deteriorating.”

While the action failed in its objective, McKibben went on to give some context:

We did not succeed in what we set out to do except for the fact that tens of thousands of people up and down the East Coast got to see the panel and got to start thinking about how to get our most important piece of real estate off of coal. I’m also incredibly proud of the three students from Unity College who stood right up to these guys and explained to them that if they wanted to communicate about the greening of the government they should do something in a place where people pay attention.

Fortunately, this isn’t the end of the road for the solar panels. McKibben and the Unity College students are keeping them in a van parked two blocks away from the White House. They will be rolled out again on October 10th as part of a series of global warming and renewable energy events around the world called Global Work Party.

According to the organizing group 350.org, “the point is to do something that will help deal with global warming in your city or community.” Some world leaders have already pledged their participation, such as Maldives president Mohamed Nasheed, who, according to McKibben, “will be on the roof of his official residence bolting down panels donated by the American company Sungevity.” At least one head of state gets it.

Why we occupied the World Social Forum

While keeping people focused on a strong, robust election process is a must, we also need to prepare for a coup.

Nearly 40 years after the founding of Greenham Common Women’s Peace Camp, it’s time to honor this vital part of the peace, women’s and queer movements.

A knee-jerk protest won’t stop a Trump power grab. It’s going to take several clear, do-able strategies that together enable us to win.

In a time of unprecedented protest, Belarus’ uprising is exceptional

How Black-led resistance movements are paving the way for reparations

The Immokalee way: protecting farmworkers amid a pandemic