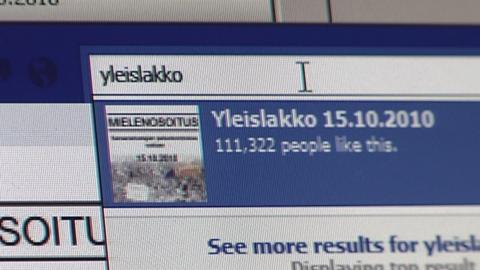 Here is a story that the cyberskeptics will jump on. A Facebook page calling for a general strike in Finland to protest an eight percent pay raise for Finnish parliamentarians, which was “liked” by some 110,000 people, fell flat last Friday. YLE reports that only a few protesters showed up at a planned demonstration outside the Parliament and life in the country carried on as normal.

While those critical of digital activism will see this as fodder for their argument, as Patrick Meier at iRevolution explained in response to Malcolm Gladwell’s recent critique in the New Yorker, making such a simple inference is not fair.

If a group of protesters don’t put any serious time into planning their campaigns, identifying key strategies and tactics, training, drafting contingency measures, fund raising, etc., then the presence of social media tools will not explain why their protests are ineffective. It would be too easy of an excuse.

Facebook can obviously assist in building a movement or campaign, but it must be combined with the more traditional, on-the-ground work of organizing and community building. This would appear to be a story of a movement on Facebook that didn’t extend offline.

Moreover, I would argue that the folks behind this campaign were aiming far too high in their goals. A general strike is one of the most serious nonviolent actions that a society can take, and they will generally require an incredible amount of organizing to pull off. They should have set a more realistic goal to start their campaign and build up to the larger, riskier actions.