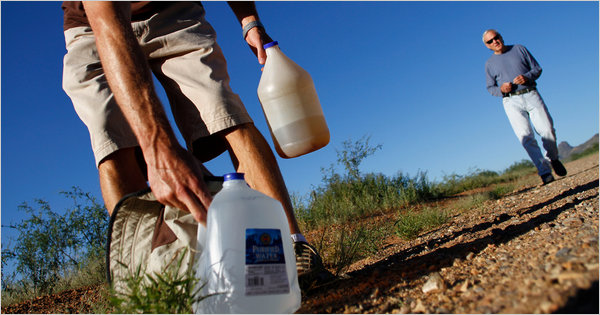 Last week, the New York Times ran a story entitled, “Water Drops for Migrants: Kindness, or Offense?” about the contentious act of putting out water for migrants. In September, The Ninth Circuit Court of Appeals overturned a “littering” conviction of Dan Millis, a No More Deaths volunteer, for setting out sealed, gallons jugs of water. A victory indeed for the many humanitarian groups providing direct aid to migrants year round, but particularly during the deadly summer months: 238 people died along the Arizona-Mexico border this past year.

But, as the article reports, “The issue remains far from settled, though. The court ruled that Mr. Millis probably could have been charged under a different statute, something other than littering. And the Fish and Wildlife Service continues to forbid anyone to leave gallon jugs of water in the refuge — a policy backed by this state’s immigration hardliners, who say comforting immigrants will only encourage them to cross.”

It is a fallacy to argue that humanitarian aid contributes to immigrant’s willingness to cross. Those who make such arguments probably do not have to worry about their children starving or not being able to go to school. Steve Johnston, another No More Deaths volunteer argues that the current immigration “crisis” has its roots in the open door economic policy known as NAFTA.

Since Operation Gatekeeper [Part of extensive Border Patrol operations in 1994, the same year as NAFTA, that built physical barriers and increased personnel in El Paso, Texas, San Diego, California, and Nogales, Arizona] and other efforts to stop the flow of migrants, it has become too risky and expensive (creating a vast criminal smuggling cartel to rival the drug cartels) to return and many migrants have brought their families to the US to reunite. The walls only make it more dangerous. Twice as many people migrate today as did before they were forced out into the desert.

It is irresponsible to talk about immigrants crossing into the U.S. without also indicting the NAFTA consequences on local Mexican economies. NAFTA depressed local agricultural markets which displaced former farmers toward border maquilladoras. After many of these factories left town, many Mexican workers were faced with few viable economic options other than crossing into the U.S. Whatever the case, it remains clear that federal border policy – in both theory and practice – is contributing to the deaths of many innocent people. To prosecute those who simply wish to save lives in both unjust and distracting from the true causes of global migration.

Backlash to anti-gay laws not a movement, but the result of one

Prosecuting border activists for leaving water for migrants is unjust