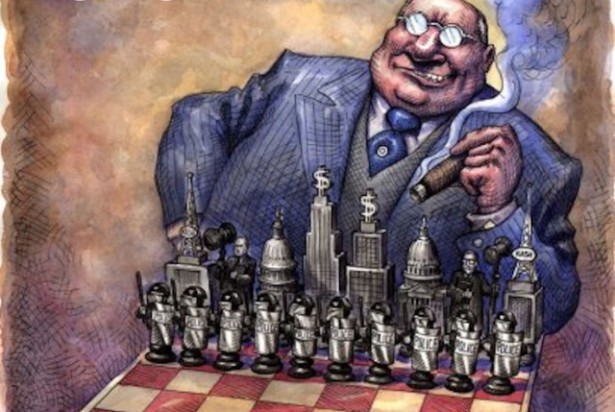 Gandhi confronted a number of adversaries in his day, including a world empire. He sometimes called them “a worthy opponent” — one that used shrewd strategy to try to defeat his movement. Even though Gandhi was deeply concerned with ethical issues, he didn’t think that taking a moral stand excused him from the need to strategize. That meant paying attention to the moves coming at him.

In keeping with my last two columns on this subject (see part one and part two), here are five more of the economic elite’s favorite moves, as it seeks to maintain dominance in the United States and elsewhere.

When the nonviolent campaign against the Keystone XL pipeline upset the “done deal” between Canada and the United States, a flurry of discussion took place among environmentalists. A prominent expert took to the airwaves to argue that, since the Alberta tar sands oil was going to be extracted anyway, wouldn’t it be better to have it transported by pipeline rather than dangerous railcars?

Many liberals bought her argument, overlooking the assumption beneath it: “the Alberta tar sands oil is going to be extracted anyway.” They (and the environmental expert) fell into the trap; they failed to notice that the very framing of choices supported the elite’s goal and created an environmental disaster.

The current energy debate in Philadelphia is over whether to accept a new vision of the region as a fossil fuel “energy hub,” enlarging pipelines for Marcellus Shale natural gas and North Dakota fracked oil, gearing up Philadelphia’s refineries and tanker shipping, and stimulating petrochemical manufacturing. Here the framing is: Would you rather create new jobs and expand our tax base to support our schools through this exciting vision, or stick with the status quo left by past deindustrialization?

At the moment, the Philadelphia climate justice campaign fights for traction because the choice appears to be between the lesser of two evils. There’s not a vivid climate-friendly vision for economic development with an abundance of green jobs. U.S. political culture habituates the public to “lesser-of-two-evils” choices, and overlooks the question: who sets up this framing? If we follow the money the answer is obvious, and raises the next question: Why leave vision work to the 1 percent?

Put on the good-cop/bad-cop routine

For a long time the 1 percent has supported a division of labor for the two major political parties. The Republicans focus on meanness and repression, while the Democrats focus on compromise with progressive movements and co-optation. This division of labor works well for the economic elite, because they win no matter what party is in power. The track record of the Democrats, even when they control both houses of Congress and the White House, supports the ever-increasing wealth and control of the elite, while distracting movements from more effective options for exerting grassroots power.

Interestingly, the division of labor between the parties grows sharper as the 1 percent faces the potential political dynamite of a growing wealth gap. At times when income distribution in the United States is a bit closer to equality, bipartisanship in Congress is frequent. When income inequality becomes more extreme, the parties distance themselves from each other. Partisan polarization generates drama, as we saw during the health reform days early in the Obama administration. The healthcare reform coalition carefully avoided drama, disregarding the lessons of the civil rights movement on what actually works to bring about major change. The vacuum was filled by Tea Party Republicans, whose drama of course upstaged the reformers and resulted in the loss of a public option in the Affordable Care Act. Tens of millions of Americans still have no health insurance, while the private health care industry reaps additional profits paid by taxpayers.

The emotion of drama comes from somewhere. The Republicans give voice to the growing fear and anger of millions who feel, and are, oppressed. While it’s odd to hear millionaire white male Republicans speechify about how pushed around and marginalized they are, the narrative plays well among white, middle class older men who now recognize their relative powerlessness.

Extreme and outrageous behavior among Republican office-holders is helpful to the Democrats, who look ever more rational and “grown-up” even while failing to deliver major gains for labor, women and environmentalists.

On the ground, this means that any progressive grassroots campaign that looks as though it has legs can expect overtures from Democratic Party operatives to “help.” It feels great, especially for people who have been marginalized, to “have a seat at the table.”

Results are something else. In Wisconsin, a powerful grassroots direct action campaign resisting the 1 percent’s attack on labor was co-opted a few years ago by the Democratic Party, and went down to defeat. On the macro level, anyone can spend 20 minutes on the Internet comparing the United States with the Nordic countries to see how allowing ourselves to be co-opted has worked out for us.

Make it vertical, then lop off the bottom rungs

This move beguiles middle class groups committed to measurement and the rational use of scarce resources. In Pennsylvania, a historic system of 14 state universities exists separate from the better-known Pennsylvania State University. One of the 14, for a variety of reasons, is booming, giving the opportunity for the elite to apply its verticalizing strategy: first “reward” the prospering one by loosening its link to the other 14. This step encourages a couple of others to seek the same status, over time supporting the urge to rank the 14 from “best to worst.” It then becomes easier to abandon the “worst-performing” schools. Fitting into the racist narrative is that the oldest historically black college in the country, Cheyney State University, will be on the chopping block. (Full disclosure: I’m a graduate of Cheyney.)

Verticalizing not only enhances competition and back-stabbing, usually a good thing in the eyes of the 1 percent, but produces an attractive (to them) bottom line: less overall public funding going to the schools that are left standing.

Set up a study commission

This move has enormous appeal as long as we forget about the reality of power. The governmentally-sponsored study commission is a graveyard for good ideas that threaten the economic elite. It also drains off the talent and brains of progressive intellectuals who could instead be working for a people’s movement, generating the vision that such movements too often lack.

Like the other strategy tools employed by the 1 percent, this move does not always work. The failure of this move in the case of Edward Snowden is instructive. Enough people stood up to defend Snowden as a whistle-blower such that the combined machinery of media and the White House didn’t fully work. This shows why activists should be careful not to exaggerate the power of the economic elite. When a radical voice is attacked, activists need to be ready to go on the offensive. At the height of the anti-Communist hysteria in the 1950s, for instance, U.S. civil libertarians in Philadelphia rented the Academy of Music and filled its 3,000 seats for a speech by a U.S. Communist Party leader who had been indicted as a criminal for violating the Smith Act.

There are many ways to counter the economic elite, depending on the specifics of the situation, but all are enhanced by preparation and going on the offensive. Not everyone who cares about justice loves strategy, but those who have a knack for it can join progressive movements and lend a hand.