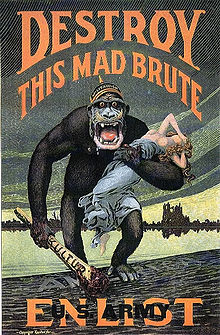 Jeremy Kessler, a writer and law student who is currently at work on an important research project about conscientious objectors in World War I, has a powerful new essay over at the Fellowship of Reconciliation’s website. Looking back at the treatment of German-Americans during the “Great War,” he sees parallels with the outbursts of Islamophobia today:

Almost a century ago, the American essayist Randolph Bourne warned that one of the unavoidable consequences of our nation’s diversity is that when we wage war on a foreign foe, we risk civil war at home. Published in the Atlantic Monthly prior to the United States’ entrance into WWI, Bourne’s prophetic essay, “Transnational America,” argued that if his country joined the war, it would be declaring war on itself, uprooting the lives of millions of ethnically German citizens and bathing the nation in hate and mistrust. On the other hand, if the United States remained neutral and cultivated domestic peace, it would show the world the possibility of multi-ethnic harmony. Bourne’s ultimatum was two-sided: while peace at home inspires peace abroad, war abroad breeds domestic division.

America has been at war for almost a decade, and the violence has already cost many nations so much. Yet we are only beginning to pay the wages of war at home. A land of immigrants, America contains within its borders all possible fault-lines of global conflict. Because at our best we are inviting, at our worst, we can always find representatives of our overseas enemies right around the corner, whether they are German, Japanese, or Muslim Americans.

Bourne’s ultimatum went unheeded and his prophecy was confirmed. As American warships sailed east in the winter of 1918, witch-hunts, raids, and show trials began on the home-front. Rioters destroyed German language newspapers and printing presses. Public libraries held book-burnings. Local governments forced hundreds of German-American schools to shut down for good. In Montana, a traveling salesman was sentenced to seven to twenty years for calling new government regulations a “big joke.” On April 4, 1918, a mob lynched the German-American Robert Prager, an Illinois miner, for making “disloyal remarks.” Intrepid German immigrants settled much of the interior of our nation. Between 1917 and 1919, their memory was effaced from the landscape, as thousands of streets and towns were renamed. Most ethnic Germans stopped speaking German altogether. An entire culture was erased.

Kessler’s essay comes to a chilling conclusion in the face of the US policy of perpetual war over the last decade: “If we want peace at home, we must pursue it abroad.”

War abroad is war at home