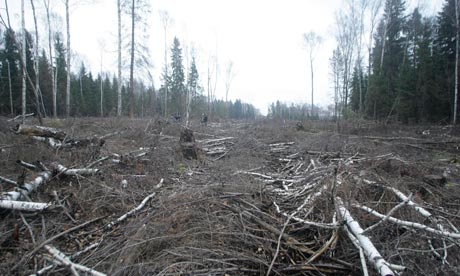 A decision to halt the construction of a highway that would cut through Moscow’s Khimki forest earlier this year has been overturned. Russia’s Deputy Prime Minister, Sergei Ivanov, announced on Tuesday that the development would go ahead as planned, adding that, “additional ecological measures will be taken.” The issue had become a cause celebre and culminated in an unusually large rally and concert in Moscow in September. Even Bono got in on the act. It was then that President Dmitry Medvedev seemed willing to bend, calling for a public review of the project and raising the possibility that the highway would be redirected.

With powerful construction and political interests arrayed against nascent civic activism, his attention offered the possibility that ordinary citizens were being heard in a country where the powerful, the connected and the corrupt hold sway.

Others saw the move as nothing more than a way of letting off steam. After a summer of devastating forest fires, a record setting heat wave, and crippling draught—one fifth of the country’s wheat crop was destroyed—the old growth Khimki forest had taken on a larger significance.

“There was never any chance of an alternative route being chosen,” Alexei Mukhin, head of the Center for Political Information, told the Moscow Times. “Too much money had already been spent on the original route. All the authorities did was take a timeout to let public opinion cool off. It was a good tactic on their part.”

Activists had campaigned for years to bring the issue to the broader public and it seemed to have paid off. But it also came at a price.

In 2008, Mikhail Beketov, a Khimki journalist, was brutally beaten for his coverage of the issue and corruption linked to the town’s mayor. On November 4, Konstantin Fetisov, a prominent Khimki activist and opposition politician ended up in a coma with a fractured skull after he was viciously beaten by men with baseball bats. Two days later, Oleg Kashin, a young reporter for the daily newspaper Kommersant was attacked outside of his Moscow apartment, just a 10-minute walk from the Kremlin. “A month later, I am still in the hospital,” Kashin wrote in a column printed in the New York Times. “One of my fingers has been amputated, one of my legs and both halves of my jaw have been broken, and I have several cranial wounds.”

Kashin covered many issues—from nationalist youth movements to regional corruption—as well as the Khimki forest dispute. “I had written several articles criticizing a proposed highway between the two cities that would run through the town,” he notes, “something the local authorities want but many residents oppose.” It is unlikely that those who ordered the attack will be apprehended. Or that either case will be solved.

Still, the Khimki forest defenders, as they’ve come to be known, have vowed to push on. They’re already pursuing a lawsuit in the European Court of Human Rights and campaign leader Yevgeniya Chirikova has said that, “there will be more lawsuits.” The forest defenders also plan to hold a demonstration in central Moscow on New Year’s Eve protesting the Kremlin’s decision.

Movements need imagination, which is why I’m not buying my kids any more toys

Khimki forest defenders felled by Kremlin, but struggle will continue