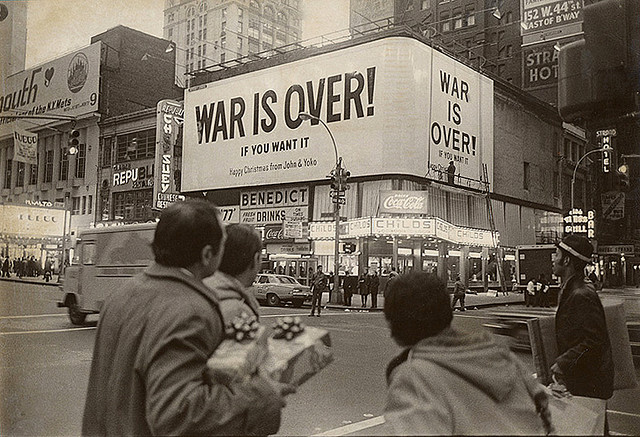 Back in 1969, I voyaged into New York City at Christmas time—not to see the tree in Rockefeller Center, or midnight mass at St. Patrick’s Cathedral, or even to shop. I went to Times Square to see John Lennon and Yoko Ono’s billboard: “War Is Over! If You Want It.”

I stood on the sidewalk and my eyes teared up. I loved John Lennon and was touched by the words “if you want it.”

This will be the first Christmas since that day that I will not hear John and Yoko’s “Happy Xmas” on the radio, drifting from unsuspecting places into our subconscious psyches. But I hear the words, the chorus, the anthem.

While I have grown up too cynical to believe it is over if I want it to be, I have been profoundly moved by the witness of too many to know that I can’t wait for someone else to declare war over. I must do my part, which is why I wish I could go to Washington D.C. on January 11 with Witness Against Torture and participate in a 12 day fast and period of sustained action to remind us all that 170 men remain imprisoned in Guantanamo.

I have been traveling to D.C. for these actions since Witness Against Torture began mounting them in 2006 and a community of friends has been built up around this action. I shall miss it and my friends next month, but at Christmas, I give thanks for the joyous gift of Witness Against Torture’s presence in front of the White House, Department of Justice, and halls of Congress and Senate in years past. Wherever they can be this January to remind us that men and women languish unjustly around the world, the spirit of John and Yoko’s message will be seen in action.

Bud Courtney is currently serving on a Christian Peacemaker Team in Iraq.

Bud Courtney is a member of the New York Catholic Worker and Christian Peacemaker Teams.

Protesting an anti-demonstration law in Iraq

A Christian peacemaker in Palestine

Peace on earth, half a century later

The government shutdown — an anarchist dream?

“War Is Over” if we do more than want it