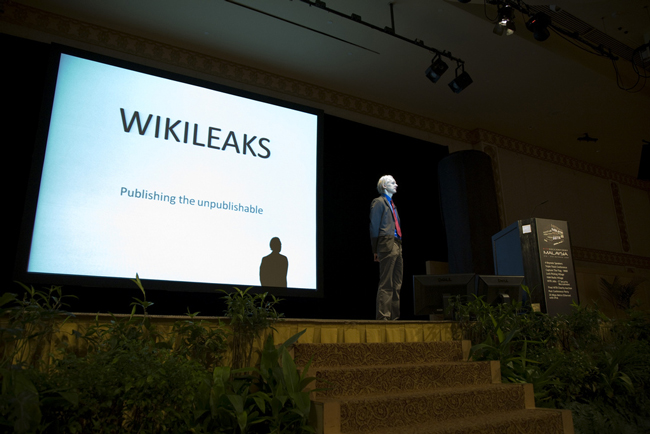 The words “irresponsible,” “reckless” and “dangerous” have been thrown around so much in connection with the Wikileaks release of State Department cables that I’m surprised the Daily Show hasn’t yet made one of its patented sound bite montages. Picture it, one right after the other: White House Press Secretary Robert Gibbs, Secretary of State Hillary Clinton, Senator John Kerry, Senator Joe Lieberman and numerous other US politicians, all saying the same three words.

What we have here are a lot of angry people who all got the same talking points memo. Then there’s Sarah Palin (who demanded Wikileaks founder Julian Assange be hunted down like Osama bin Laden) and former Arkansas governor Mike Huckabee (who called for whistleblower Bradley Manning’s execution). Too far? I would like to think so, but it seems not. The mainstream press has reprocessed it all into a convenient meme that has most Americans believing Wikileaks is a disreputable hack media outfit that’s endangering our security.

It’s an indication of how willingly the American public has swallowed the lies and assumptions of the national security state as necessary  that more people instinctively agree with the government’s defense of secrecy than applaud the whistle-blowing. It’s a variation of the Stockholm Syndrome: captives coming to the defense of their captors. In summer, when Wikileaks made public almost 100,000 documents about the war in Afghanistan, 66 percent of those questioned in a Gallup poll declared the release “wrong.” Curiously, when CBC, the Canadian news agency, polled Canadians about the latest leak, 85 percent were in favor. Naturally: the world prefers to be better informed, for once, about how the United States exercises its power.

The belief that Wikileaks is somehow a threat to US security is not founded in any fact. As McClatchey Newspapers reported on Monday, even “US officials conceded that they have no evidence to date that the release of documents led to anyone’s death.”

Meanwhile, the documents themselves certainly reveal US complicity in the deaths of innocent people. One cable describes a meeting where Yemeni President Ali Abdullah Saleh told Gen David Petraeus that: “We’ll continue saying the bombs are ours, not yours,” essentially revealing that the US (not Yemen) had carried out a missile strike in Yemen last year that killed dozens of local residents.

Amazingly, this revelation has been used as an example of a “negative consequence” of the Wikileaks release by—as NPR wrote in defense of US government interests— “providing more fodder for al-Qaida’s recruitment efforts in Yemen and abroad.” Former Assistant Secretary of State James Rubin has been making the rounds to further hammer this point home. On Tuesday’s Colbert Report, Rubin said:

In general, diplomats have to resolve problems by resolving an issue privately and that might include allowing a leader to say something publicly that is different than what they say privately. So we might have to allow a hypocrisy in an Arab country if it’s going to get the job done.

In short, Rubin is saying our security is contingent on lies—lies that allow us to bomb other countries, killing innocent people, under someone else’s name. As journalist Norman Solomon recently pondered, “what kind of ‘national security’ can be built on duplicity from a government that is discredited and refuted by its own documents?”

Taking this criticism a step further, the Economist wrote:

If secrecy is necessary for national security and effective diplomacy, it is also inevitable that the prerogative of secrecy will be used to hide the misdeeds of the permanent state and its privileged agents. I suspect that there is no scheme of government oversight that will not eventually come under the indirect control of the generals, spies, and foreign-service officers it is meant to oversee. Organisations such as WikiLeaks, which are philosophically opposed to state secrecy and which operate as much as is possible outside the global nation-state system, may be the best we can hope for in the way of promoting the climate of transparency and accountability necessary for authentically liberal democracy.

Some folks ask, “Who elected Julian Assange?” The answer is nobody did, which is, ironically, why WikiLeaks is able to improve the quality of our democracy. Of course, those jealously protective of the privileges of unaccountable state power will tell us that people will die if we can read their email, but so what? Different people, maybe more people, will die if we can’t.

So, to call Wikileaks “irresponsible”, “reckless” and “dangerous” seems to be missing the point. It is only those things to the government and the entities that protect the government, namely the corporate media. Is it any wonder that tabloid stories promoting so-far unproven claims about Assange are getting as much, if not more play, than the leaked cables themselves? As Salon blogger Glenn Greenwald wrote after the release of the Iraq War Logs:

Focusing on the tabloid aspects of Assange’s personal life can have no effect — and no purpose — other than to distract public attention away from the heinous revelations about this war and America’s role in it, and to cripple WikiLeaks’ ability to secure and disseminate future leaks.

It’s not hard to see why The New York Times, CNN and so many other establishment media outlets are eager to do that.  Serving the Government’s interests, siding with government and military officials, and attacking government critics is what they do.  That’s their role.  That’s what makes them the “establishment media.”  Beyond that, the last thing they want is renewed recognition of what an evil travesty the attack on Iraq was, given the vital role they know they played in helping to bring it about and sustain it for all those years.

Wikileaks is not the solution to a better, more democratic government or a truth-seeking, un-beholden media. But it is pushing both to be better right now. As the aforementioned Pierre Tristam wrote:

Don’t bother claiming that Wikileaks isn’t part of the free press. In many respects, it’s better: It’s the raw materials. The C-Span of government’s and the military’s underbellies. The Iraq and Afghanistan papers have, for example, shown that civilian casualties have been far heavier than reported, that American soldiers and mercenaries have murdered civilians more often than reported (read one example), that Iran’s role in the Iraq war, well known by the Bush administration, was far heavier than the administration let on, that Pakistan’s secret services, funded by U.S. military aid, have been aiding the Taliban for years, and that, in either Iraq’s or Afghanistan’s case, public notions of American successes are undermined by the secret documents’ grimmer and far less hopeful accumulations of failures.

We now have historical documentation, where we didn’t before, and the importance of that sort of truth shouldn’t be understated.