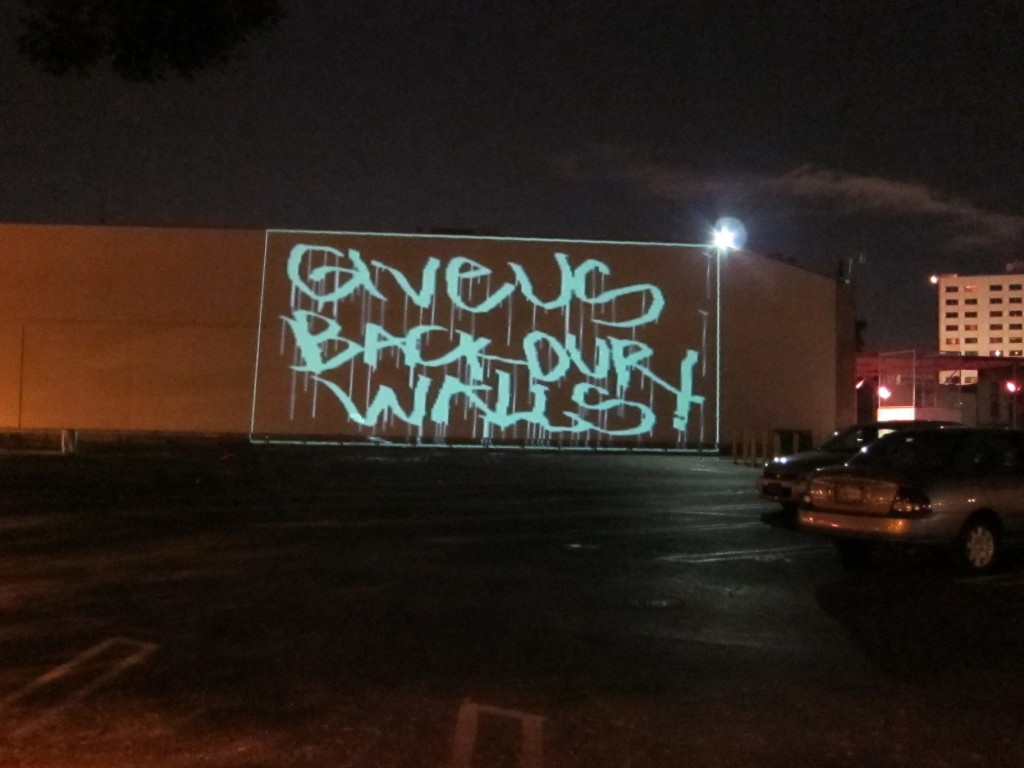 Last month, the Italian street artist Blu had his anti-war mural removed from the wall of the Geffen Contemporary building in Los Angeles before the public ever had a chance of seeing it. Museum of Contemporary Art (MOCA) director Jeffrey Deitch ordered the whitewashing of the mural because he found its imagery — coffins draped in dollar bills — too insensitive to a neighborhood that includes a Veterans Affairs hospital and a war memorial to Japanese American soldiers.

Antiwar activists, street artists and even some veterans, however, have called the whitewashing an act of censorship. And many showed up on Monday night to stage a laser-light protest on the wall of MOCA’s Geffen Contemporary.

Cloaked in knit caps and heavy wool scarves in the cold night air, the 20 or so self-described art activists huddled near the museum’s expansive north wall, projecting laser graffiti out of the back seat of a silver VW Passat with a laptop perched precariously on the roof of the car.

The group of artists — which included respected Chicano artist/Vietnam War veteran Leo Limon as well as Joey Krebs a.k.a. The Phantom Street Artist — took turns tagging the museum wall using a handmade laser graffiti gun created for the event by artist/computer programmer Todd Moyer. A specially designed computer program animated the light-graffiti so that it looked like dripping paint as it hit the wall.

One by one, the artists took aim and shot their messages onto MOCA’s exterior — drippy, handwritten, illuminated scrawl: “Dump Deitch.” “Give us back our walls!” “War is over?” “Peace Now!”  The group meticulously documented the event, with plans to upload photos and video clips to Facebook and YouTube within days.

Carol Wells, founder and executive director of the Center for the Study of Political Graphics, was on hand to document the protest as well. She said she considers Deitch’s actions as censorship. “Outrageous is the first word that comes to mind,” she said. “I think he was absolutely wrong. He was trying to do an edgy exhibit, hires an artist known to be edgy. Pushing the boundaries is the very definition of a street artist –- so what did he expect?”

Vietnam War veteran Michael Lindley, president of the L.A. chapter of Veterans for Peace, showed up to support the street art crew. Lindley said he wasn’t offended by Blu’s mural but that that wasn’t the point. “It may be offensive to some people, but we have the freedom to know, freedom of speech. As veterans, that’s what we fight for, that’s what we died for,” he said. “Our government tells us we’re fighting for our freedoms. Yet they take our own freedoms away from us in our own country.”

The climax of the laser light show came about an hour in, when the protesters projected a photo of Blu’s mural back onto its wall of origin. Then they superimposed the word “censorship” in red across the image. A round of hooting and whistling followed.

Why reconciliation and redemption are central to countering white supremacy