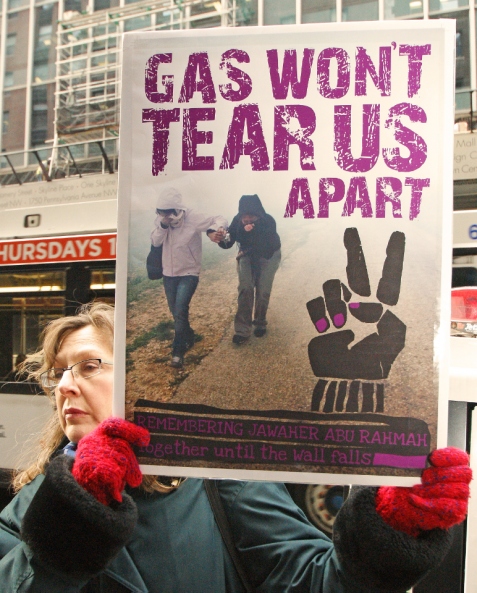 On January 11, thirty-five New Yorkers gathered outside the offices of Point Lookout Capital Partners, a New York firm that facilitates investment in Combined Systems Inc. (CSI), to protest the company’s ongoing sale of tear gas to the Israeli army. The Israeli army’s use of the CSI tear gas has resulted in the deaths and injuries of numerous nonviolent protesters in the Israeli-occupied West Bank, including the killing of Bil’in resident Jawaher Abu Rahmah earlier this month.

According to a press release from Adalah-NY, who organized the protest:

The New York protesters held signs with photos of Palestinians and international activists killed and severely wounded by Israeli tear gas canisters at protests, including Jawaher Abu Rahmah and her brother Bassem, who was killed when shot directly with a canister in April 2009, and Palestinian Khamis Abu Rahmah and Americans Tristan Anderson and Emily Henochowicz, all of whom were severely injured by Israeli tear gas canisters fired directly at them in 2009-2010. Protesters displayed photos of tear gas canisters manufactured by CSI, financed through Point Lookout Capital, and shot at protesters in the villages of Bil’in and Ni’ilin by the Israeli army.

Participants staged a re-enactment of protest marches held weekly in Bil’in, including a mock tear-gassing by an actor dressed as an Israeli soldier. The protesters then choked and collapsed motionless on the sidewalk outside the office of Point Lookout Capital. A protester dressed as a doctor then read the names of some of those killed and injured by tear gas in the West Bank.

Dave Lippman from Adalah-NY explained the connections between CSI, Point Lookout, and the Israeli military’s repression of nonviolent activists:

The Israeli military is using tear gas manufactured by CSI and financed through Point Lookout Capital as a weapon to crush the growing unarmed protest movement against Israel’s illegal confiscation of Palestinian land for Israeli settlements. We as US taxpayers are paying for some of the tear gas that Israel is shooting at Palestinian, Israeli and American protesters. The US government needs to stop providing this deadly aid, and CSI and Point Lookout need to end their complicity in Israel’s violent repression of legitimate protest.

Adalah-NY, in partnership with Codepink, the US Campaign to End the Israeli Occupation, and Jewish Voice for Peace wrote a letter urging CSI to stop providing equipment and weapons which are used to kill and maim unarmed protesters in the West Bank. Following this open letter, an Adalah-NY action alert inspired 870 emails to CSI and the supporting firms Point Lookout Capital and the Carlyle Group. Additionally, a Codepink petition directed to the same companies has garnered 2,141 signatures.

Follow those links to express your displeasure with the Israeli military’s misuse of CSI’s tear gas, resulting in injury and death.

Why should you be displeased, even outraged? Because if you are a US taxpayer, you are paying for some of the tear gas that is used by the Israeli military against unarmed protesters. In 2007 and 2008, the US State Department provided $1.85 million worth of “tear gasses and riot control agents” as a piece of the $3 billion in military aid that the US pays annually to Israel. This lethal tear gas is then used on Palestinians, joined by international and Israeli supporters, who are peacefully lifting their voices to demand that their land be returned and that Israel and the international community recognize their inalienable rights.

From Assad to ISIS, a tale of Syrian resistance