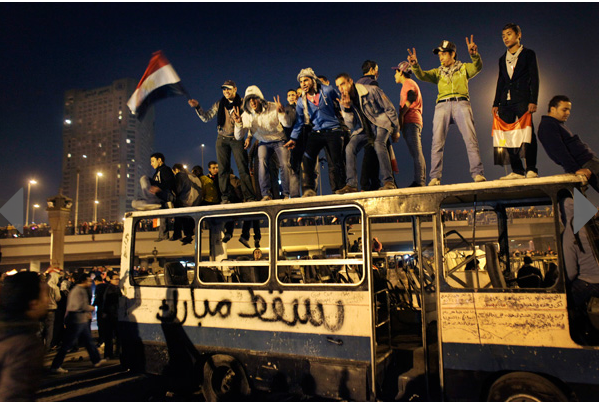 Today let us celebrate and applaud the courageous Egyptians who struggled to bring down another dictator and set a new course for their ancient and accomplished civilization.

That is about all we should say today—thank you and congratulations, sisters and brothers of Egypt. You have shown not only individual courage, but also a cultural strength that draws from deep rivers of resources, flowing from the stories of resistance for millennia in ancient Egypt (e.g., Shiprah and Puah), from the deep waters of Islam (including such giants as Abdul Gaffar Khan and Maulana Azad, Chaiwat Satha Anand and other heroes of nonviolent resistance), from the twentieth century torrents of nonviolent resistance. You have become models for a new generation that takes up not the gun but the computer, the demonstration, the fearlessness of struggle.

Tomorrow or next week we can talk about the pitfalls of transition, about how to prevent another military dictatorship or another theft from the people by those wishing to take advantage of a power vacuum. There will be time later to ponder the shallowness of what Julius Nyerere called “flag independence” when colonialism was conquered but the revolution was only state-deep, rather than shaking up the economic, cultural and social structures ossified by decades of tyranny.

But for now, let’s shout and dance and thank God and the people of Egypt for their light shining through the darkness of yet another tyranny now conquered by courage.

Lester R. Kurtz is professor of public sociology at George Mason University and a visiting lecturer at the European Peace University.

Bhutan calls for a mindful revolution at the United Nations

How one Latin American peace group has persevered over 40 years

Celebrate and dance to the music

After a devastating wildfire season on the West Coast, climate activists are busy mobilizing mutual aid, young voters and a just recovery.

Inside the groundbreaking student organizing drive at Kenyon College.

The fate of our rights won’t be determined by Amy Coney Barrett, but by popular struggle

Colombians take on their militarized police

Protesters grieve and demand justice for Breonna Taylor after idictment