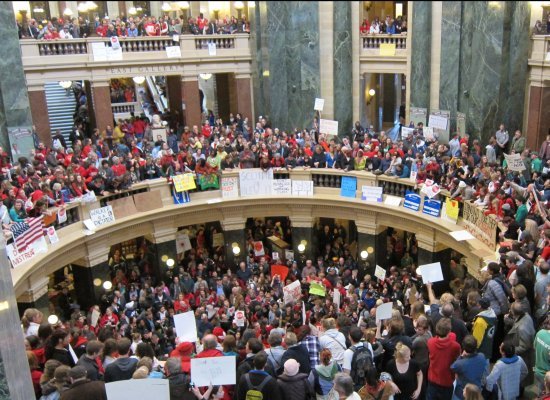 A week after a shocked world reveled in Egypt’s incredible moment of freedom and people power, Wisconsin is reviving its own unique tradition of people power and creative protest. Follow the latest updates with Mother Jones. Tens of thousands descended upon the state capital in Madison to protest Republican Governor Scott Walker’s legislative proposals to cut collective bargaining rights for public employees. In an attempt to stall the vote from happening (see: quorum), the state’s Democratic senators have refused to show up for work and have fled to Illinois. Gov. Walker and Republican lawmakers have sent the state police out after the boycotting Democratic senators in an attempt to force a vote to the floor. The Assembly has since been suspended until Tuesday and there is no indication as to whether or not the Democrats will break their strike. Provocative comparisons to the nascent revolutions in the Middle East are already being made by Democracy Now (“Democraccy Uprising in the U.S.A.?) and Yes! Magazine co-founder Sarah van Gelder (Wisconsin: The First Stop in An American Uprising?).

The protests in Wisconsin are sliding into the usual ideological warfare that has typified the so-called Right and Left for the better part of two decades, since the end of the Reagan Era.  This stand-off is spiraling into well-rehearsed factions: Republicans vs the unions; responsible fiscal policy vs. the Democrats; conservatives vs. liberals.  Sarah Palin is also weighing in reminding liberals that solidarity means sacrifice.  Op-eds around the country seek to discredit the legitimacy of the protests by indicting teacher and student walkout as irresponsible.  But most of this mainstream coverage, like any good electoral cycle in recent times, is missing the point.  This is not about irresponsible teachers abandoning their classrooms and unions trying to bankrupt the state.  And even if it were, if that was the outcome of a democratic process, so be it.  We must lie in our own graves.  But that is not the point.  Wisconsin is a lighthouse for the rest of country, shining light on the perpetual struggle for economic prosperity that has abandoned the poor and working classes in both the private and public sector.  The stripping of collective bargaining rights is not about balancing a budget.  It’s about consolidating power.  And the protests are its resistance.  Personally, I concede that major flaws exist within the union structure, but for now organized labor can still be a force to be reckoned with.  As we saw in Egpyt, when labor threw its considerable weight behind the pro-democracy movement things changed.  At least in Wisconsin, it seems that the unions remain the last organized resistance to the emerging oligarchy behind Gov. Walker; the obscure billionaire Koch brothers helped to bankroll Walker’s campaign.

There are indisputable differences between Egypt and Wisconsin.  Any serious comparison of Mubarak to Walker lacks mature political understanding. But in terms of people power and nonviolent protest, there are some similarities in both Egypt and Wisconsin – which is why Walker and the power elite find these protests so threatening to their vested interests. Nonviolent action is predicated upon the assumption that the power of a dictator (or any power holder) depends upon the consent of the governed to comply with the directives and requisites handed from above.  It is a hierarchical understanding of power. When 80,000 people show up rejecting that paradigm from operating as usual, it sends a shock to the system. Without the people in the streets and the national attention toward the Democratic senators in a Rockford hotel, momentarily becoming an ally to the will of the people, injustice would have continued unabated. This is a monumental moment in people’s movements for equality, justice, and democracy because, after decades of dwindling progressive politics, we are literally witnessing the might of nonviolent people power actually making a difference in our own backyard.  We are experiencing new life being breathed into democracy from the bottom.