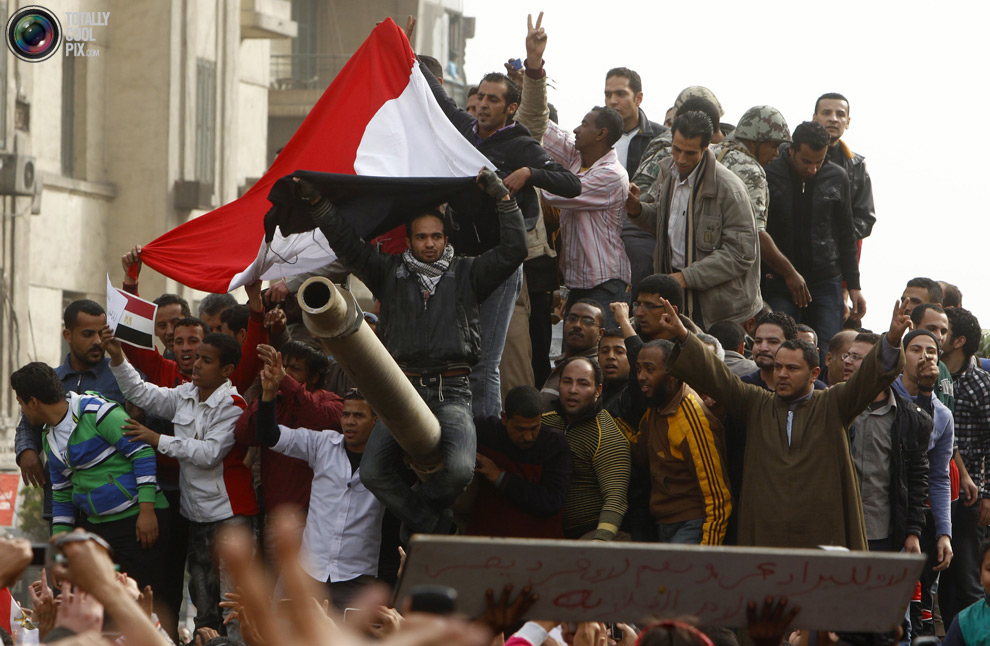 After the recent Tunisia uprising and the Lebanon government collapsing, men and women throughout Egypt have taken to the streets, protesting for Hosni Mubarak to leave and bring to an end his decades of oppressive ruling. These nonviolent, direct actions speak poignantly of what the people in Egypt think of the U.S. and its pro-Western regime: They no longer fear them.

But this has not stopped demonstrators from covering the city, with the noise of their anti-government chants growing louder. And after the death toll of more than 200 Egyptians, army officials promised to let the marches continue saying they “would not use force against Egyptians staging [peaceful] protests,” even though The Guardian reported of hearing the military firing off rounds near Heliopolis. It’d be more reassuring if the soldiers would lay down their weapons and join the activists.

Meanwhile in the U.S., where most administration officials remain silent about the violent dictatorship they’ve been supporting with its $1.3 billion in annual “aid” to the military, Hillary Clinton advises Egyptians to “engage in peaceful protests” and Robert Gibbs adds “violence is not going to solve this.” For the most part, the Egyptian people seem to understand these morals; it’s the U.S. government that needs to practice what it preaches and curb it’s supply of rifles, teargas canisters, M1 tanks and those lovely F-16 aircrafts that are used to intimidate, injure or kill people.

If it’s not weapons intimidating people, it’s Hosni Mubarak telling the world to fear the shadowy figures that would take his place if he’s ousted. If you look to Israel, you’ll get more of this irony when listening to bigger doozies, like Prime Minister Benjamin Netanyahu worrying that Mubarak will be replaced by radicals who would “crush human rights and will not allow democracy or freedom, and will constitute a threat to peace.”

It’s painfully obvious that the Israeli and U.S. governments give the false impressions that their hearts beat for “peace” “democracy” and “human rights”. But now the Egyptian people’s blood has boiled over from years of suffering, leaving the government staring on blankly at the widespread, nonviolent opposition.

But for now, Mubarak is playing the waiting game for things to calm down. But how long can he cling to his so-called presidency when millions of defiant people are yelling for his departure with the whole world watching their every move unfold on Al Jazeera’s cameras. This could possibly be all that it takes to push out Mubarak, and maybe the beginning of many more nonviolent uprisings to take hold and ruthless dictators to fall beneath them.

Trapped inside the military the day Milosevic fell