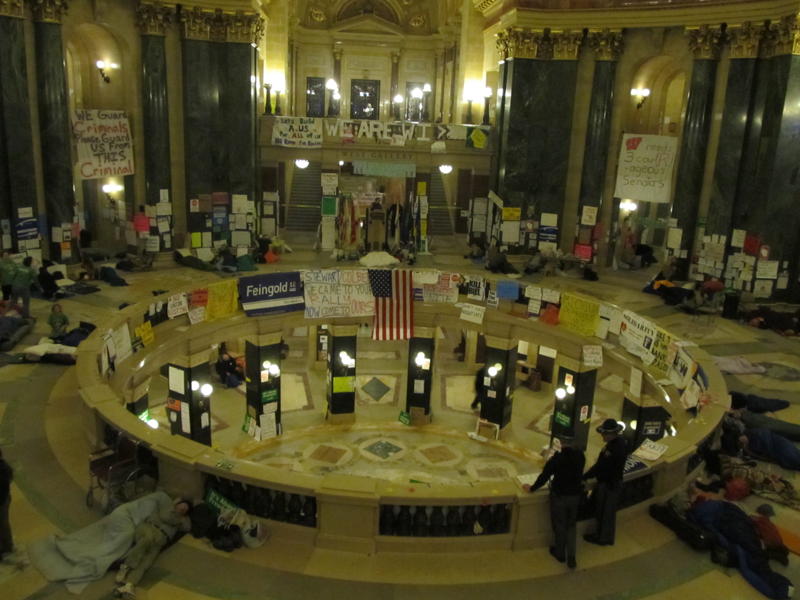 It was four in the morning and I was walking in a zombie-like state inside the Capitol building in Madison, Wisconsin. The State Assembly was voting on the Budget Repair Bill at the time, and it was being blasted out through giant loud speakers into the Rotunda, echoing off the cold marbled floors and walls. My earplugs weren’t helping block out the noise one bit, and the lights that surrounded us, which were dimly lit earlier that evening, were brighter than ever before. Some of us questioned if this was being purposely done to make things as uncomfortable as possible. But we knew once you left, you could be locked out in the cold until the next morning.

The few of us that were still awake wandered down the circling hallways, quietly passing the sleeping protesters and their possessions strewn across the floor. I was rereading all of the handmade signs that were taped to the walls that towered over me. They conveyed messages of peace, unity, solidarity and political statements. One read “These Signs Are Our Voices And You Can’t Take Them Away!”

Eventually, I made my way back to the center of the Rotunda, looking down at the empty drum circle below. It was here that the Wisconsin protesters unleashed their frustration and struggles to people they had never met before. This was their most democratic space in the building. Four hours prior, this had been a place where music and protest were married together and people danced to the beat. Everyone was allowed to give a speech on the megaphone or play an instrument if they wanted. One protester told me that a man gave an anti-union rant before, but they didn’t stop him. Instead they let him speak without it ending in a confrontation.

The building has become another home to the Wisconsin people, a makeshift village within a city which not too long ago was used to conduct business as usual among the politicians. But now the community of protesters, mostly young people, occupies the building, the heart of the city, utilizing every section that’s accessible. “This is what this place was meant for. This is why it was built,” said one of the protesters while she talked and mopped the floor in front of me.

The significance of what has been accomplished can not be overstated. In one end of the gallery there was a medic section and around the corner from there was an area called the “child care/family space,” where families could bring their children to do activities or just to get away from the bustling crowds in the Capitol building. Food station tables were located everywhere, covered with donated supplies from around the country. “Charging Stations” were set up for people to plug-in to the internet and send messages to the outside world. There was a Lending Library where political Zines and books could be borrowed and returned after reading. I walked past Lost and Found boxes full of mittens, gloves and hats. It was literally a grassroots movement that had started these.

But the primary group that organizes the area within the capitol appeared to be the Teaching Assistants’ Association (TAA) up in the north gallery. Earlier that day, I had watched organizers maneuver their way around the office, searching for a cleared spot to sit down and type away on their laptops. Others were quickly busing in and out of the room with a handful of papers. I spoke to one of the project assistants who helped run the main command center for the TAA inside the capitol building. She told me that they mobilize volunteers to do trash collection, clean up the building, provide food, present film showings, and handle media and data entries.

The TAA also worked closely with the police force, a relationship that they have built overtime. One of the many ways they did this was to have “marshals” who roamed the building keeping the peace and making sure no one is vandalizing or doing something that could lead to cops arresting people.

But there were also outside forces helping as well. When I first entered the Capitol building after the evening rally, I spent a good portion of my time with Susan McMurray, a lobbyist for AFSCME, who gave me the tour of the building. “Scott Walker has reignited the labor movement.”

She informed me that she was also part of what was called the “war room.” As we took the elevator, she told me that the war room was where leaders met privately in the buildings across from the Capitol. There they would run field campaigns to organize workers (like correctional officers) outside of Madison, who have been threatened by their supervisors not to miss work to go protest. They figured out ways to get those in La Crosse, Appleton, Waupaca and many other areas in Wisconsin to organize and start protests in their hometowns. “This is not just a Madison event, it’s all over Wisconsin,” she said.

The war room has coordinated buses to be available for those who chose to come to Madison and protest. They coordinate the press, do things with other advocacy groups, make signs and talk with other unions. “A democracy is very time consuming,” she added, smiling before the elevator stopped and the doors opened to the roaring crowd chanting “Kill the Bill.”

Soon after we parted, I overheard someone announce that there were nonviolent workshops taking place. I attended one of the multiple “civil disobedience” workshops that the TAA were coordinating (originally they were called “nonviolent demonstration training,” until people started saying that they wouldn’t attend since they already considered themselves nonviolent).

Amy Mondloch, director of the Grassroots Leadership College, oversaw these workshops. She said that the trainers conducting the workshops ranged from having little experience in the subject to being 20 or 40 year veterans. There were 3 to 4 workshops happening simultaneously every night, each one of them would have 3 separate times to attend. One of the civil disobedience trainers said that sometimes there will be 40 people in one workshop, but on average close to 15-17 people participated.

Lawyers were getting involved as well, giving legal advice when they could. One of the lawyers told us that, “Right now, there are lawyers lined up from here [Madison, Wisconsin] to the Illinois border, ready to represent you.” Day and nighttime ACLU phone numbers were handed out and displayed on signs throughout the assembly. Many of the protesters already had the numbers penned in ink on their forearms or memorized in their heads.

I asked Amy if a lot of these protesters knew much about civil disobedience, and how they felt about it. She nodded and replied, “Folks are being faced with a question: Are you ready to risk arrest?” It was assumed that if there were mass arrests people would be taken to the Alliance Center to be processed. I spoke to a couple of the activists about this possibility and I never saw a shred of fear come over them. They really didn’t think it would happen, but if it did, they would more than likely cooperate with the authorities.

Although these training groups advocated nonviolence, they were not pushing others to risk arrest, but what to do if one chooses to be arrested. They had designated an area to go to for those who were going to risk arrest, and to sit and wait if and when the police did start forcing everyone to leave. Amy pointed out that the police were largely on their side. Furthermore, in the first 8 days of occupying the Capitol building, over 250,000 people have showed up. Out of this massive showing, hardly any arrests have been made.

As one of the goals stated in the training class, it is important to be interacting with the police which helps keep them on the protesters side. More importantly, the local cops are unionized. At one of the drum circles an officer from Cops for Labor spoke thanking the protesters for what they were doing. Just recently other officers have done a sleep-in to stand in solidarity with the protesters.

But an activist told me that one of the most heated days was when a couple hundred protesters did a sit-in while the State Assembly first tried to vote on the bill and ram it through. They blocked off the entire Assembly Hall entrances with their bodies so that the Republicans couldn’t leave. The media couldn’t even enter. “It got intense,” he said, as “there were maybe 200 people” who acted as human barricades.

When I moved through the Madison Capitol Building, I witnessed Republicans, Democrats, Liberals and Progressives together and peacefully protesting. Later, as they slept next to each other on the hard marbled floors, all under the same dome, I stood firmly, looking around, feeling changed by the sight. I felt safe there. I could leave my stuff unattended for hours and not worry about it being stolen. I could bump into someone and not feel that I angered them. I felt this was a place where people, who were never politically active before, were discovering themselves and a nonviolent movement growing within them.

It was a thriving, friendly and trustworthy community – something I haven’t been a part of since I was a kid. On the speakers, two people were arguing inside the State Assembly about the bill. Some of us listened in silence. At one point, I looked above me, at the West Gallery Bridge, and in cutout white letters, taped to the outside railing, the words spelled out: “We Are Wisconsin.”

Addendum: I intentionally kept some of the protesters names out of this article, not because they would be embarrassed by their comments, but because one of them mentioned that they are all one and the movement is what’s important—not becoming famous. But their voices will not be muted or silenced.

An anthropologist in the midst of a geek insurgency