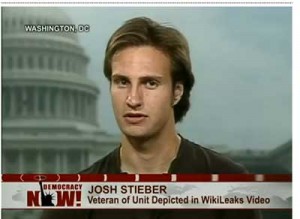 Last December at Slate, Kathryn Schulz interviewed 22-year-old Josh Stieber on his choice to become a conscientious objector. (We’ve mentioned him previously on the site here and here.) Stieber grew up a devout evangelical Christian, and says that, at the school he went to,

But after going to Iraq, he quickly saw that the democratic values he went there to promote had no place in the training of soldiers or how they were expected to behave:

Pretty quickly after I got in, I started to see inconsistencies between how the military was talked about in such glorified ways [when I was] growing up, and then how it was acted out in training. Training was very desensitizing. We screamed slogans like, “Kill them all, let God sort them out.” We watched videos with bombs being dropped on Middle Eastern villages with rock and roll music in the background. People really started to celebrate death and destruction, and that definitely didn’t match up to what I’d expected. I’d told myself that I was willing to kill if necessary, but that wasn’t the same as celebrating it.

Stieber’s unit moved into an abandoned factory in Baghdad, and he watched as the populace staged a peaceful demonstration against them. Many of the residents were displaced by the soldiers’ presence. Before long, the protesters resorted to violent tactics.

They had tried telling us nonviolently that they didn’t want us in their neighborhood, and when that didn’t work, they tried telling us violently, by using snipers and roadside bombs and that kind of thing. And once they started to get violent, we started to get violent, too. It went back and forth and each attack seemed to be more severe than the last one. Eventually the escalation led to a kind of desperation on the part of a lot of soldiers.

It was then that Stieber refused orders to shoot an unarmed civilian. He began to see that he was part of a contradictory, useless, unwanted, and harmful effort.

Instead of standing by passively, Stieber opted to go to military prison after seeing a video about Gandhi. But his parents intervened and told him about conscientious objector status. His fellow soldiers were angry about his decision, but instead of returning their anger, Stieber tried to practice his newfound belief in nonviolence by listening and being empathetic; he found that it helped ease tensions.

Now Stieber is becoming a teacher and is reflecting on the shift in perspective he experienced in Iraq. The same beliefs in Christian morality and democracy that brought him into the military in the first place were the same ones that led him toward the realization that the violence in Iraq is unnecessary and wrong.

Data from the Governmental Accountability Office shows that the military processed 425 applicants for CO status from 2002 to 2006—a tiny portion of an organization with around 2.3 million people. (According to J.E. McNeil, executive director of the Center on Conscience and War, those statistics aren’t very accurate because they don’t account for applicants whose requests didn’t make it up the chain of command for a final decision.) Tellingly, it was Stieber’s parents, not his superiors in the Army, who informed him about the possibility of applying for CO status rather than going to a military prison. Perhaps if such information were more readily available to those in uniform, it would be opted for more frequently, and they would feel freer to voice their reservations about the policies they’re ordered to carry out.

Rachel Signer is a sociocultural anthropologist and journalist, living in Brooklyn, NY.

A false sense of objectivity: Sharif Abdel Kouddous on reporting from Tahrir Square

On the civil rights trail with Bob Fitch

The police as a proxy for power

From American soldier to conscientious objector