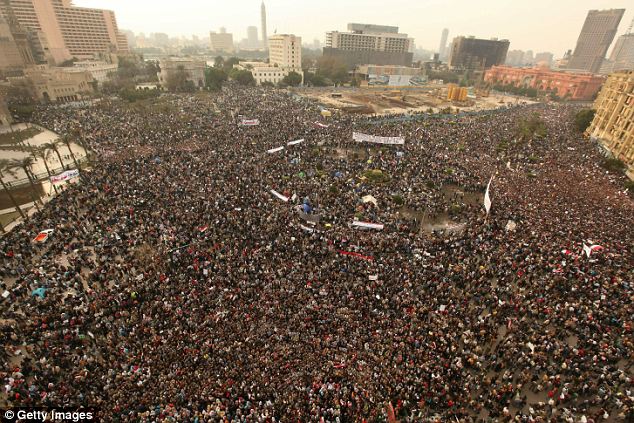 Millions of Egyptians are on the streets today across the country in the largest coordinated protest since the mass demonstrations began last Tuesday. According to Al Jazeera there are more than a million people at Tahrir Square in central Cairo.

Similar massive demonstrations calling on Mubarak to step down are also being witnessed across other cities, including Sinai, Alexandria, Suez, Mansoura, Damnhour, Arish, Tanta and El-Mahalla el-Kubra.

Tens of thousands were reportedly marching in Alexandria while the number of those protesting in Sinai was estimated to be around 250,000.

The respected columnist for The National, Sultan Al Qassemi, noted on Twitter that 250,00 protesters were out in El-Mahalla el-Kubra and 500,000 in Mansoura.

At Tahrir Square, the mood of protesters is reportedly celebratory, even though Mubarak has yet to heed their calls to step down. In fact, Mubarak is proving to be quite stubborn. Within the last hour, he delivered a speech in which he said that he would not run for re-election in September, but would stay in office until then. (This is exactly the position President Obama urged Mubarak to take earlier in the day.)

Not surprisingly, Mubarak’s announcement does not appear to have appeased the protesters. A reporter on Al Jazeera reported that before the speech was over the crowd started chanting, “Not enough!”

The people are determined not to leave the streets until Mubarak steps down and are saying they are in this for the long haul. Whether they will be able to persevere is another question. Most of the protesters I’ve seen interviewed have not had a clear answer about what they will do if Mubarak refuses to leave.

On a positive note, relations still seem positive between the army and the protesters in Cairo. There was one report that a soccer tournament was being organized at Tahrir Square and the soldiers were invited to join them. Both the people and the army have set up checkpoints to make sure that no one comes to the demonstration with weapons. In Alexandria, however, Al Jazeera is showing live footage right now of violent clashes breaking out between protesters and the military.

There is no signs that these clashes have spread, but if they do, there could be a dramatic turn for the worse. Let’s hope that they are able to maintain nonviolent discipline during these incredibly trying times.