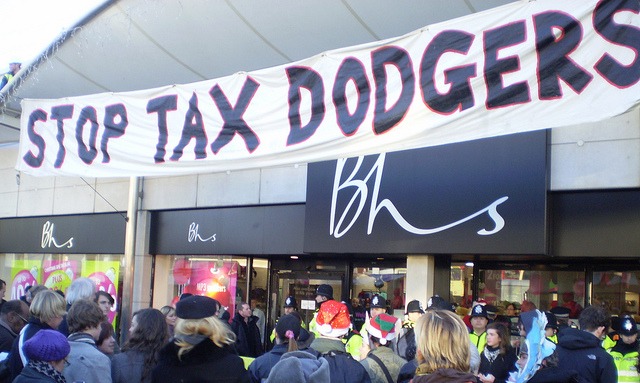 Earlier this month, writing for The Nation, Johann Hari talked about building a Progressive Tea Party and highlighted the UK Uncut movement—which has shut down more than 100 stores belonging to tax-dodging companies—as inspiration that such a feat is possible.

Can this model be transferred to the United States? Remember that a few months ago, Brits were as pessimistic about the possibility of a left-wing rival to the Tea Party as Americans are now. Of course, there are differences in political culture and tax law structure and enforcement, but there are also strong parallels. In the United States the same three crucial factors that created UK Uncut are in place… Americans are facing the same cuts as the Brits. They are being ripped off by corporations and rich people just like the Brits. And they are as angry as the Brits. “All it takes,” says Tom Philips [one of the UK Uncut organizers], “is for a few people to do what we did in that pub that night and light the touch paper.”

It seems Hari’s piece may have inspired just that. A little over two weeks ago, Carl Gibson, a 23-year-old former Mississippi Public Radio reporter fired over protesting a pro-BP cover-up, came across Hari’s article. His initial thoughts were: “Dammit, if no else is going to do it, I will.”

Art Levine of the Working In These Times blog explains what happened next:

Beginning with friends in Jackson and his home state of Kentucky, he started a Facebook page and Twitter stream, and borrowed some pointers and a web template from the British organizers for the debut of US Uncut. It’s a loose network that doesn’t depend on top-down leaders and invites activists to create their own protests timed to national days of action. This Saturday, nearly 50 protests are scheduled, targeting primarily the Bank of America, which has paid no income taxes while receiving $2.3 billion from the federal government in 2009, along with other corporate tax dodgers.

While nearly 8,000 people have joined the Facebook page as of today, there’s no telling if tomorrow’s protests will turn out enough people on the streets to call US Uncut a burgeoning movement. For now, though, it’s a sign—as if Wisconsin weren’t enough—that Americans are growing tired of seeing corporations and banks grow rich while their benefits and incomes shrink.

US Uncut launches with 50 bank protests on Saturday