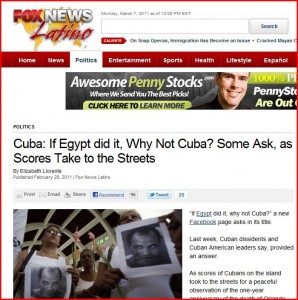 Fox News Latino ran an article last week that clearly revealed its slant: “Cuba: If Egypt did it, Why Not Cuba? Some Ask, as Scores Take to the Streets.”

In the piece, Elizabeth Llorente interviews Cuban dissidents and Cuban-Americans who argue that Cuba is far more repressive than Egypt, but that an uprising on the island nation is ultimately inevitable.

(While I’m no expert on Cuba, the claim that it’s much worse than the countries in the Middle East seems really far-fetched. Can anyone who does know more about Cuba let me know in the comment section how Cuba’s political system compares to Egypt under Mubarak or other dictatorial regimes in the region?)

Not surprisingly, NPR took a different approach to the same question in this segment.

While Nick Miroff reports that Castro’s opponents do claim he is more controlling than dictators in the Middle East, he points out that:

Even Jonathan Farrar, the top U.S. official in Cuba, acknowledged in a leaked 2009 cable that Cuba’s dissidents are divided and have little following on the island.

Moreover, Miroff also notes that according to Amnesty International there are only five political prisoners in Cuba at the moment. As terrible as that is, to put it in context, the United States is still holding 172 prisoners in Cuba at Guantanamo Bay, almost all of whom have never been charged with any crime.