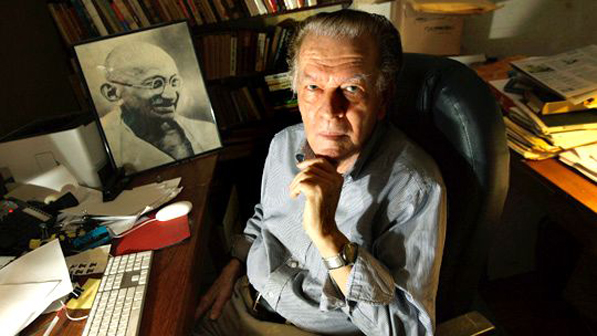 Last week, in a great interview with Irradwaddy, a newspaper started in 1993 by Burmese journalists living in exile, Gene Sharp offers his thoughts on the military intervention in Libya and why nonviolent resistance has not yet succeeded in Burma:

Q:Since Tunisia and Egypt, the protests in the region have changed. Libya’s uprising has become an armed revolt. Do you feel that—even with UN Security Council and Arab League support—it is right to intervene in Libya at this juncture?

A: It is not the course of action I would have chosen. I think the Libyan democrats did not do their homework in advance like the Egyptians did—in Egypt, they appeared to have a plan and studied quite some time in advance to develop a program of non-violence without fear, which brought them victory quite quickly. In Libya, this appears not to have been the case. The Libyans have gotten in over their heads, and should have expected the type of repression that Gaddafi is capable of.

People who are realistic about the power of political defiance know that if it is a threat, the regime will see it that way and will fight back. The regime will jail and beat and kill, and that is a sign that what you are doing is threatening the regime.

Dictators can beat you with violence, if you fight on those terms, and of course the rebels cannot defeat the Gaddafi regime on the level of armed force. So they are left to call in help from outside, which cannot give them the empowerment or victory they seek.

Q:Do you think that when legitimate peaceful protest—such as in Burma—is met with state violence, the protesters then have the right to self-defense? To fight back? To seek alliances with sympathizers in the country’s police and army? To appeal for international military support, as the Libyan rebels have done?

A: I think it is an unfortunate choice that people make. It is predictable that your opponent will have the means of violence, the means of oppression. If you get someone else to come and help you, they will come with their interests, and potentially turn your country into a battlefield. Even if they help defeat the oppressor, it will not result in empowerment. People will not be ready to fight the next oppressor who tries to take over the country. In contrast, if the Egyptian military tries again to take control, the people know how to counter this, they have the sense of empowerment, of their own power.

I couldn’t agree more and am thrilled that Sharp hasn’t backed this war like so many others in the progressive world. This is exactly the kind of stance that those of us who believe that nonviolence is the most effective way to stop dictators and end repression should be taking.

And here is Sharp’s take on the situation in Burma:

Q: Why in your view has non-violent resistance failed, so far, to undermine military rule in Burma? What are the factors differentiating Burma from recent changes in Egypt and Tunisia, as well as older examples such as the Color Revolutions in the former Soviet bloc, Serbia in 2000 and the Philippines in 1986?

A: I think there are a few explanations for that. For a start, many of the opposition groups, the various nationality groups such as the Karen, Mon and others, they all had their armies and mini-armies, and they thought they would be weakened by departing from those and going over to non-violence, or “political defiance” as it was known in Burma. Other groups, such as the All Burma Students Democratic Front (ABSDF), had their mini-army, and people in the camps, though temporarily agreeing to switch over to just political defiance, reversed that after a couple of years. All the various armed groups thought they could defeat the Army, but I think that was a foolish judgment on their part, as the Army was bigger and stronger and had more weapons.

The so-called National Coalition Government of the Union of Burma, which isn’t really a coalition government at all, with headquarters in Washington DC—not very close to Burma—they had their own ways, they thought, to get independence and defeat the government, but they didn’t show much signs of learning something new.

And, Aung San Suu Kyi, for all her wonderful qualities, and her heroism and inspiration for those who believe in democratic rights and the rights of Burmese people—she is not a strategist, she is a moral leader. That is not sufficient to plan a strategy.

Although “From Dictatorship to Democracy” was written for Burmese, there were no Burmese groups who really took that analysis seriously or used at as a strategy for the liberation of Burma. People got arrested and sent to prison for carrying it, in Burmese and other languages, they could organize very powerful and brave demonstrations in Rangoon and elsewhere, but they did not plan a grand struggle. If you don’t plan, if you don’t have a bigger strategy, you’re not going to win.

Until education is free for all, organize elites too

Anti-drone movement prepares for take off

Sharp on Libya and Burma