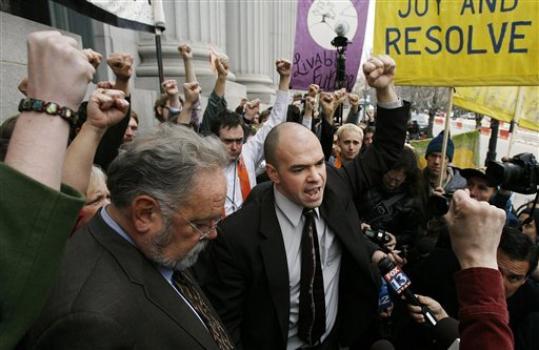 Tim DeChristopher, the University of Utah economics student who disrupted a federal auction of oil and gas leases by posing as a bidder in late 2008, was convicted on two felony charges last week. Sentencing is scheduled in June and DeChristopher could face up to 10 years in prison. But few would argue that DeChristopher lost his inner trial of conscience. As he said following the verdict (and many times before), “I have no regrets. I have been ready since I took this action to face the consequences.”

DeChristopher acted on principle and had he been able to express that principle in court, perhaps the trial would have ended differently. But the judge refused to admit evidence related to his motivations for bidding in the auction—specifically, that further fossil fuel extraction threatens the environment and humanity. It also didn’t end up mattering that the government later withdrew the leases because the auction itself was conducted without the proper oversight.

In a recent interview with Yes! magazine, DeChristopher explained how this refusal to allow the jury to use their conscience in making a decision undermines the legal system created by our founding fathers.

I think it prevents any kind of concept of a fair trial, because for a trial to be fair the player with the most influence in the courtroom has to be the neutral party. My case is called The United States of America v. Tim DeChristopher, and certainly the prosecutor represents the United States because he’s paid by the U.S. government. But the judge is also paid by the U.S. government. That obvious reality didn’t escape our founding fathers, which is why they insisted on jury trials—juries are the only figures in the courtroom that are actually a neutral party. They realized there’s no way you can have a fair trial if the neutral figure doesn’t have the authority to make whatever ruling that they want. In a football game, if you have a referee that’s being paid by one of the teams, there’s no way you could have a fair game.

Beyond this disappointment, however, is the tremendous amount of satisfaction and no regret DeChristopher feels for his action.

I would do it again in a heartbeat. In a general way I’d actually been preparing for this for a long time, building up the general commitment to take this level of risk, to be ready when the time came. I knew I would probably go to jail for it, but my mindset was: “It’s worth it to keep this oil in the ground.” Which happened. But what I didn’t expect was what it’s meant for other people or the activism and opportunities that have arisen from it. I feel like I’ve already gotten far more out of it than I anticipated, and the costs are at least as worth it now as they’ve ever been.

Ultimately, DeChristopher sees tremendous potential for the climate movement if they only understand their power.

From a disempowered perspective, we look at opinion polls and we think, “Oh, only so much of the population agrees with us and only 10 or 15 percent really understand the urgency of the issue. We need to get the majority on our side, to appeal to them in whatever way we can.” I think that’s a losing strategy. We’re missing out on the fact that even if 10 to 15 percent of the U.S. population really get the issue of climate change, that’s 30 or 40 million people. That’s more than enough to bring the fossil fuel industry to its knees. If even a tenth of those people were willing to engage in significant nonviolent civil disobedience, that’s an incredible force. To begin with, there’s no way they could all be arrested—that would double the population of prisoners we currently have in this country, and we already have a prison crisis. They wouldn’t know what to do with us. And that’s with just a tenth of people who really understand the problem.

We think we have no power when in fact we have more than enough power. Right now, we have a big enough movement to win this battle; we just need to start acting like it. That’s the message that the climate movement really needs to internalize. On an individual level, it means making the commitment that we’re going to be powerful and effective agents of change; on the movement level, it’s about making the decision that we’re really going to win this battle.

To read the rest of the Yes! interview click here. Or to read my own interview with DeChristopher from a little over a year ago, click here. It goes a little bit further into his commitment to nonviolent direct action.

Behind the sprawling, chaotic movement to boycott Trump