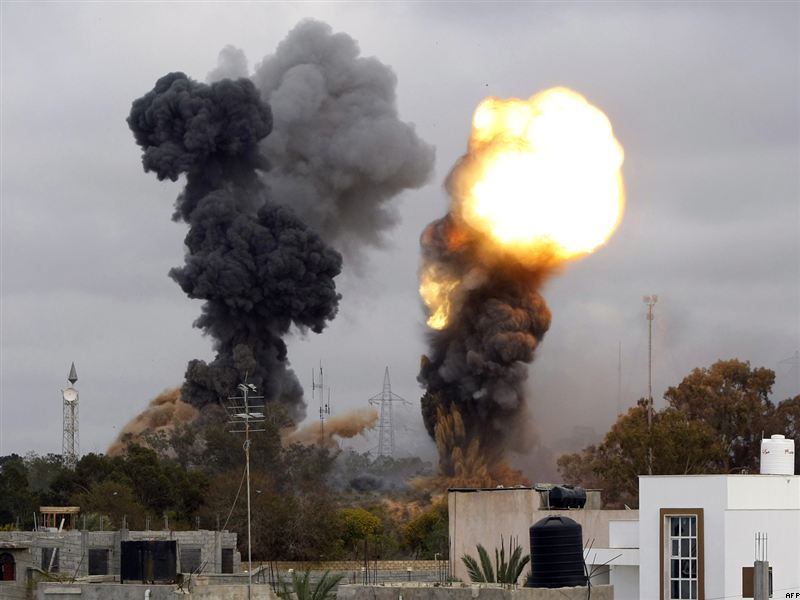 As always, Stephen Zunes’ writings on US policy toward the Middle East and nonviolent action are some of the most thorough and informative out there, and his articles on the situation in Libya are no exception. At the end of February, he wrote this in-depth piece on the history of US-Libyan relations, which I found very helpful, and more recently he had a great critique of the concepts of Responsibility to Protect (R2P) and humanitarian intervention.

On Monday, he wrote an wonderful piece about the Western military intervention and nonviolent alternatives in Libya that reiterates many of the points I’ve been making on this site since the war began.

First, he argues that the Libyan movement’s turn to violence, and the subsequent outside military intervention, will make it much less likely that any kind of democratic government will emerge in the wake of this conflict.

…the chances of a successful transition to democracy following the ouster of an authoritarian regime are much higher if the overthrow results from a massive nonviolent movement, which requires the establishment of broad alliances of civil society organizations and the cooperation and consensus to make that possible. This contrasts with an overthrow resulting from a violent struggle – led by an elite vanguard, dominated by martial values and seeking power through force of arms rather than popular participation – which, more often than not, has simply resulted in a new dictatorship.

When massive nonviolent resistance liberated a number of key Libyan cities back in February, popular democratic committees were set up to serve as interim local governments. For example, Benghazi – a city of over a million people – established a municipal government run by an improvised organizing committee of judges, lawyers, academics, and other professionals. Since the resistance to Qaddafi turned primarily violent, however, the leadership of the movement appears to now have significant representation from top cabinet officials and military officers, who for years had been allied with the tyrant, defected only in recent weeks and whose support for democracy is rather dubious.

A 2006 study by Jeffrey Pickering and Mark Peceny found that military intervention by liberal states (i.e., states like Britain, France and the United States) “has only very rarely played a role in democratization since 1945.” Similarly, George Downs, and Bruce Bueno de Mesquita of New York University found that U.S. interventions since World War II led to stable democracies within ten years less than 3 percent of the time, and a separate study by their NYU colleague William Easterly and several associates found that both U.S and Soviet interventions during the Cold War generally led to “significant declines in democracy.” Finally, a 2010 article by Goran Piec and Daniel Reiter examines forty-two “foreign imposed regime changes” since 1920 and finds that when interventions “damage state infrastructural power” they also increase the risk of subsequent civil war.

Other studies, like “How Freedom is Won,” which was published in 2005 by Freedom House, or Maria Stephen and Erica Chenoweth’s exhaustive “Why Civil Resistance Works,” demonstrate with extensive evidence that nonviolent movements are far more likely to lead to democratic governments after they are victorious than armed struggles.

Zunes then argues that war on Libya and the taking up of arms by rebels are only likely to empower Qaddafi and discourage further defections from within the Libyan security apparatus:

Given how their history of suffering under colonialism and foreign intervention has made Libyans notoriously xenophobic, there is a risk of a nationalist reaction from Western bombing that could strengthen Qaddafi more than the damage done to Qaddafi’s war-making machinery would weaken him.

In addition, defections by security forces – critically important in ousting a military-backed regime – are far more likely when they are ordered to gun down unarmed protesters than when they are being attacked by foreign forces.

And finally, while acknowledging the unique challenges faced by the opposition in Libya, Zunes provides numerous examples to counter the myth that Qaddafi is too ruthless for nonviolence to work in removing him from power.

In fact, he makes the case that the pro-democracy movement in Libya made its most significant gains during its nonviolent phase and that it was not successful only due to a lack of strategy and planning.

In Libya, the protests were almost exclusively nonviolent during the first week of the uprising. It was during this period that the pro-democracy movement made the most gains, taking over most of the cities in the eastern part of the country. It was also during this period when most of the resignations of cabinet members and other important aides of Qaddafi, Libyan ambassadors in foreign capitals and top military officers took place. Pilots deliberately crashed their planes, flew into exile and otherwise refused orders to bomb and strafe protesters. Thousands of soldiers defected or refused to fire on crowds, despite threats of execution.

It was when the rebellion took a more violent turn, however, that the revolution’s progress stalled and was soon reversed, which in turn led to the United States and its allies attacking Libya.

Smart strategy is key to any insurrection, whether it be armed or unarmed. The largely spontaneous Libyan uprising, in its nonviolent phase, focused almost exclusively on mass protests, making them easy targets for Qaddafi’s repression, rather than relying on more diverse tactics – including strikes (which could have been particularly effective in the oil industry), boycotts, slowdowns, and other forms of non-cooperation. In short, the failure of the nonviolent struggle was not because it was nonviolent, but because it was not well-organized strategically.

Brecher on using the law against climate goons

On the outskirts of crypto city — the architecture of surveillance