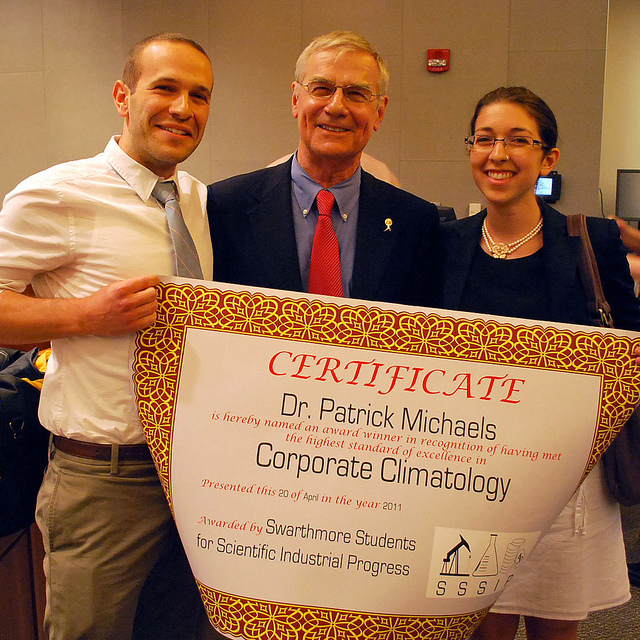 On the first-year anniversary of the BP oil spill catastrophe, students at Swarthmore College nonviolently protested at a lecture by energy industry-sponsored climate scientist Dr. Patrick Michaels of the Cato Institute. After the lecture two students from Swarthmore Students for Scientific Industrial Progress (SSSIP) – a group that formed to address the troubling connections between fake climate science, corporate profits, and climate injustice – awarded him a certificate of excellence in corporate climatology, applauding his continued information laundering on behalf of dirty energy interests. As they report about their conversation with him, Michaels agreed that Americans will believe anything that a man in a suit says. At no point did he realize that he had been punked. 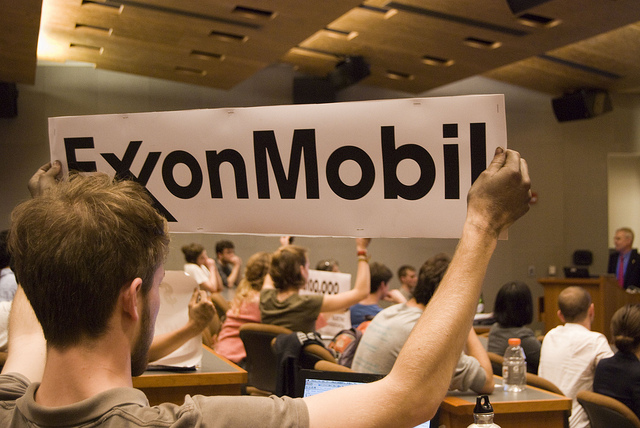 During the lecture preceding the humorous award, student protestors held up signs detailing Michaels’ vested financial ties to giant corporations like ExxonMobil and Koch Industries. The sign-holders’ hands were stained an oily black as a reminder of the continuing effects of the BP oil spill. Audience members pressed him with difficult questions. When one asked “How can we even have an honest conversation when we don’t know how you’re being paid?,” Michaels responded “I don’t discuss personal matters in public.”

Dr. Patrick Michaels is one of the most quoted and recognizable climate change skeptics out there today, and a self-proclaimed ‘lukewarmer.’ As one of the few skeptics with any relevant scientific credentials, Michaels has received much attention from the US media for his criticisms of climate change. He is currently a fellow at the Cato Institute, which has ties to Koch Industries—an oil and chemicals company that last year spent more than $8 million in support of the oil and gas industry, and continues to be a major lobbying force for the fossil fuel industry. The Cato Institute was founded with a $500,000 donation from Koch Industries’ CEO Charles Koch. Fellow CEO David Koch sits on Cato’s Board of Directors. Cato also receives funding from the American Petroleum Institute, which represents over 400 oil companies. In 2006, Michaels himself received $100,000 from the coal-fired power production company Intermountain Rural Electric Association, to make the public case against climate change. Michaels’ industry-sponsored manipulation of pseudo-science has been revealed to be a conflict-of-interest sham that directly fuels corporate profit and climate injustice.

Anjali Cadambi is an artist, activist and student at Swarthmore College.