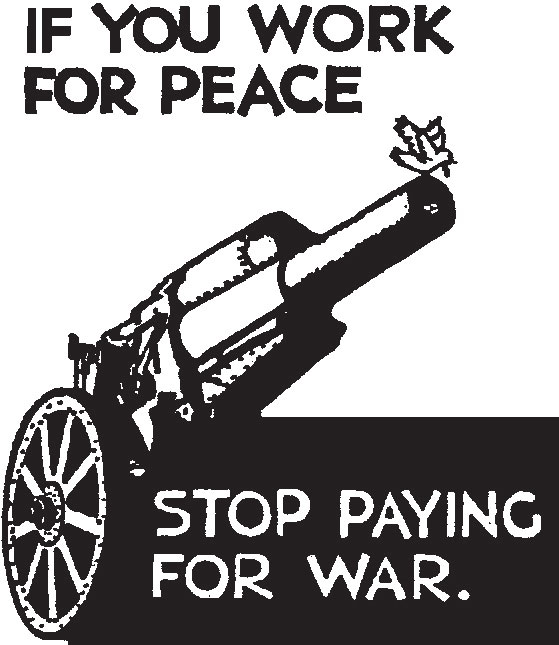 In this country there is a long history of people of conscience not paying some or all of their taxes to protest the endless wars being fought with their money. This year, Tax Day comes very close to Easter, which Shane Claiborne notes, marks “the most stunning act of grace and enemy-love in human history.”

In trying to follow this nonviolent Jesus, Claiborne participated in war tax resistance this year and has published on God’s Politics the letter that he sent the IRS along with his tax return, which is worth reposting here in full:

I am filing my 1040 here. As you will see, I made $9,600 this past year, and found that according to the 1040 form, I owe $324.44 of that to federal taxes. While I am glad to contribute money to the common good and towards things that promote life and dignity, especially for the poor and most vulnerable people among us, I am deeply concerned that 30 percent of the federal budget goes towards military spending, with $117 billion going to support the wars in Afghanistan and Iraq. (Further, when we include the 18 percent that goes towards past military costs, such as the $380 billion in debt payments, 80 percent of which are military related debts, that number goes up to a total military budget of $1,372 billion — nearly half of the federal budget). My Christian faith and my human conscience require me to respectfully reserve the right not to kill, and to refrain from contributing money towards weapons and the military.

For this reason, I am enclosing a check for $227.11, which is, according to the form, 70 percent of what I owe. The remaining $97.33 represents 30 percent of my tax payment, the amount that would go toward military spending. I will donate this remaining 30 percent to a recognized U.S. nonprofit organization working to bring peace and reconciliation.  My faith also compels me to submit to the governing authorities, which is why I am writing you respectfully and transparently here. I am glad to discuss this further if you have any questions.

May we continue to build the world we dream of,

Another creative, legal effort that Bryan and I have written about is the National Campaign for a Peace Tax Fund, which has lobbied:

Congress to extend conscientious objector status to taxpayers. Legislation that would support the diversion of federal income, gift and estate taxes from conscientious objectors to a nonmilitary life-affirming fund has been proposed in every Congress since 1972. Despite the bill’s benefits – restoring freedom of religion as protected in the first amendment, stimulating thought on moral convictions, and actually increasing tax revenue by spending less on the cost of forced collections from protesters – Congress has been remiss to pass it, fearful of jeopardizing its ability to wage war.

The Religious Freedom Peace Tax Fund Bill was reintroduced this year by Representative John Lewis (GA-05) with 5 cosponsors on March 17.

Unfortunately, until this bill passes, which could be a very long time, those who cannot support killing with their tax dollars will have to continue to break the law to follow their conscience. The War Resisters League and the National War Tax Resistance Coordinating Committee offer numerous resources on their websites concerning every facet of this form of resistance, as well as contact information for local support groups.

Reserving the right not to kill on Tax Day