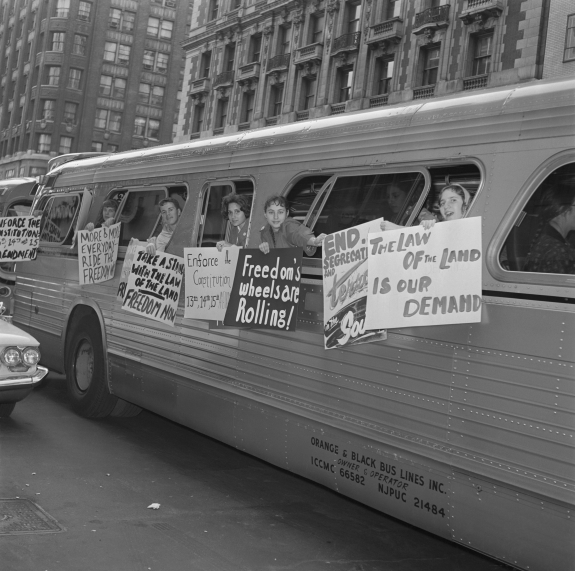 This month marks the 50th anniversary of the Freedom Rides—one of the most iconic campaigns of the Civil Rights movement. There has been a good deal of press coverage, from newspaper and magazine articles to a PBS documentary, detailing how nonviolence confronted and eventually overturned local laws that perpetuated illegal segregation.

I learned a lot from this occasion of remembrance—much of it truly surprising. For instance, the Freedom Rides were not initially endorsed by the leaders of the Civil Rights movement, such as Dr. King. They thought it was too dangerous and that the group behind it, the Congress of Racial Equality (CORE), was not experienced enough to pull it off. The fear was that its failure would set back the whole movement. 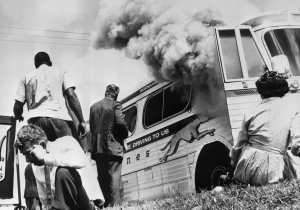 They weren’t wrong to think this. After 10 days of travel, the first Freedom Ride came to an end with a bus being set on fire in Anniston, Alabama. It appeared as though the worst fears were being realized. But members of the Student Nonviolent Coordinating Committee (SNCC) decided to step up and lead a second Freedom Ride out of determination to not let violence appear stronger than nonviolence.

This was arguably the pivotal moment. But similar type moments would arise throughout the campaign. At one point, several Freedom Riders and 1,500 other people were trapped inside a church in Montgomery, Alabama, surrounded by an angry white mob. To make matters worse, a group of armed black cab drivers were on their way to attack the mob. Dr. King, who was also inside the church, knew this confrontation had to be stopped, if not for the integrity of the campaign than for the many lives that were involved. Longtime Civil Rights activist Bernard Lafayette recounted the events that followed in a New York Times Op-ed yesterday:

Dr. King’s mission, then, was to persuade the cab drivers to abandon their rescue attempt, lay down their weapons and go home. His small group gathered at the front door of the church, lined up in twos. Then they walked out the doors, as if they were marching.

There was an unforgettable silence as they passed out of the church. We watched as they walked through the howling crowd; I was sure I would never see them again. And yet, for all the yelling, the mob didn’t touch them — such is the power of nonviolence.

About an hour passed. Suddenly, out of the darkness, they all reappeared, unharmed. Dr. King had convinced the cab drivers to abandon their mission. This was no small miracle. Dr. King showed through this act of courage in this most harrowing moment of the campaign that fear was not a factor for him. It was, at that point in the Freedom Rides, the greatest lesson he could have offered.

Interestingly, King never actually joined a Freedom Ride, much to the disappointment of many in the campaign. But in a strange way, his presence wasn’t needed. The story of the Freedom Riders is the story of more than 400 people of all ages, races, genders, religions and regions of the country who came together to defeat a racist backwards system without ever resorting to violence, despite being beaten and imprisoned. 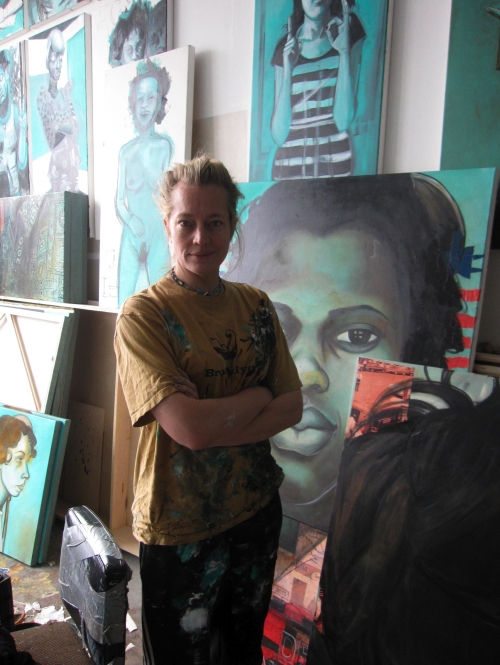 To better understand these people and add to my recent growing knowledge of the Freedom Riders, I met with an artist who has been painting their portraits for the past two years. Her name is Charlotta Janssen and after a chance run-in last month, she invited me to check out her studio space in the Brooklyn Navy Yards, where she is furiously at work finishing more than 50 portraits for an upcoming show.

Janssen started painting Freedom Riders in 2009, basing her work on historical police mug shots. After several exhibitions (plus a story in the New Yorker) she was commissioned by the Downtown Public Library Of Nashville to make more for a show next month. 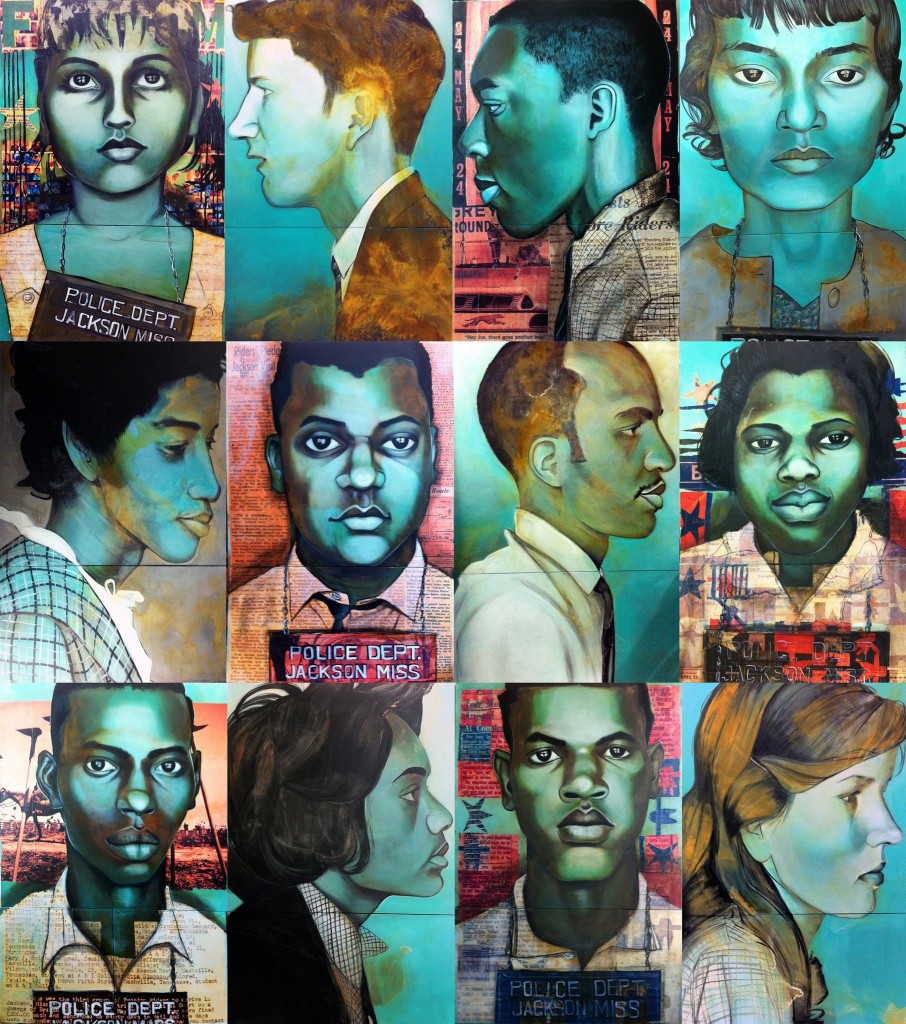 Her close study of the faces reveal so much and clearly, given the amount of time she has spent looking at them, Janssen has gained her own unique perspective on the Freedom Riders.

“You can totally feel a mix of emotions,” she said. “Especially in the young ones. The people who came from the North were very innocent and the people who are from the South have their guard up because they know more of what they are up against. The young people from the North had training. They had an imagination. But no real practice.”

Working with a narrow color spectrum of black, white, rust and teal, Janssen’s portraits go beyond the realm of natural skin tones. This is because, as she explained, “It really comes down to your structure and the mood you hold inside or are letting out. It’s very important to get the right angle of the eyes. Are they looking out? Are they gazing down? Are they coming inward or are they looking through you or straight at you?”

She also thinks the mugshot itself is a telling medium. 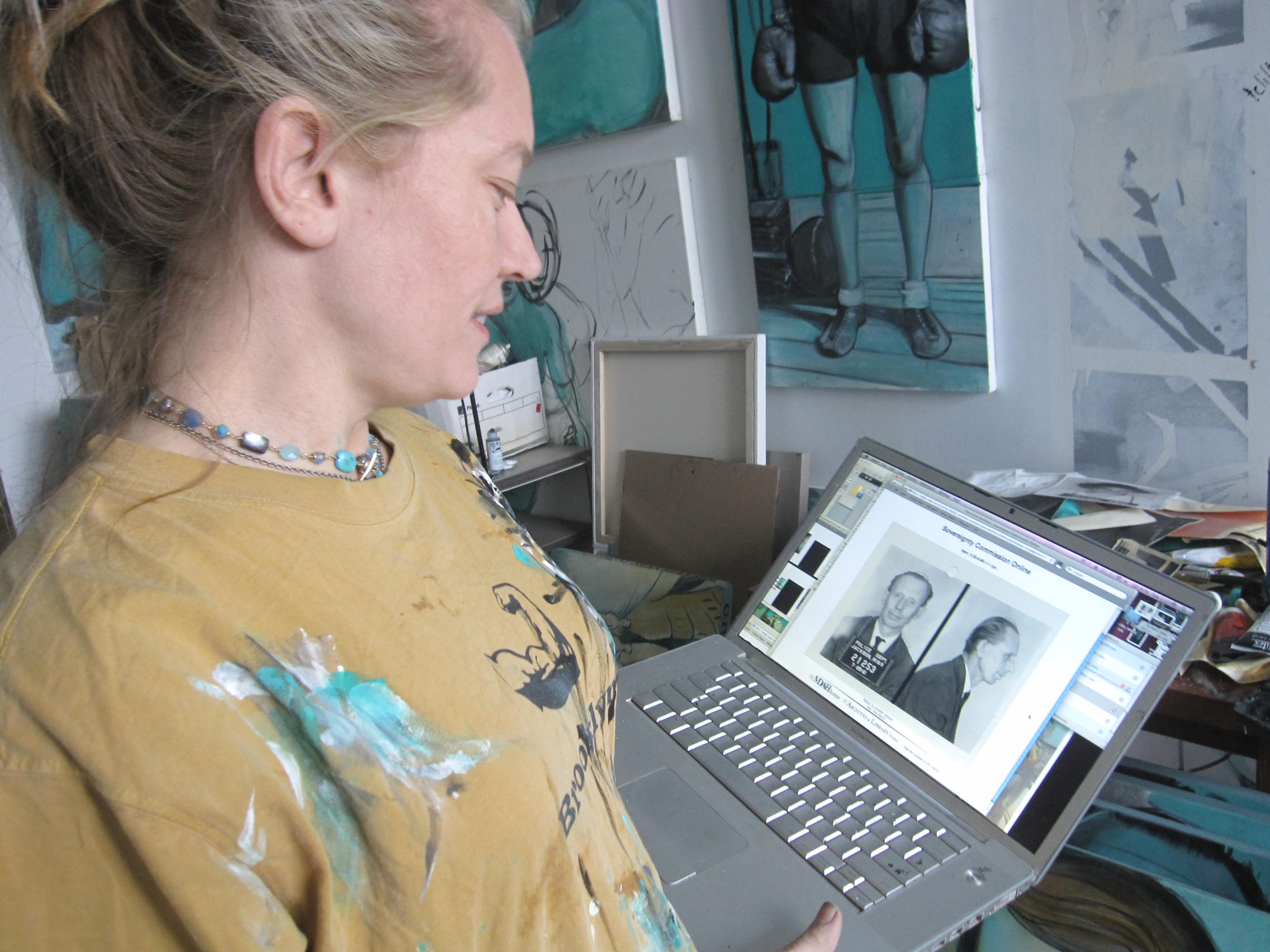 In the case of the Freedom Riders, it’s clearly the latter. As Janssen noted, “This was a very loving and inclusive movement and that’s what attracted me.”

No doubt that’s still what’s attracting us to this story 50 years later.

For more on Charlotta Janssen’s Freedom Riders project check out this short video: