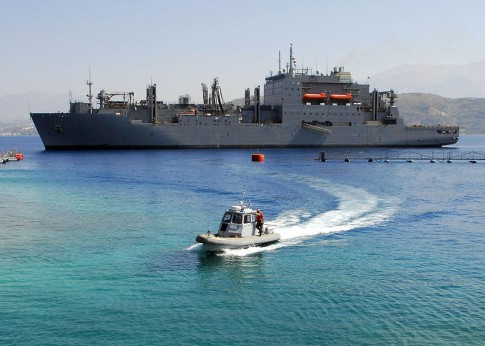 No one delivers sad irony quite like the United States Military. Yesterday the US Navy announced that its next new ship will be named after nonviolent civil rights and labor leader Cesar Chavez. The Chavez family and the president of the United Farm Workers Union, along with Navy Secretary Ray Mabus were on hand to make the announcement at a San Diego shipyard where the USNS Cesar Chavez is being built.

According to The Las Vegas Desert Sun, Mabus highlighted Chavez’s nonviolent leadership as a reason for naming the ship after him.

“His example will live through this ship,” he told the crowd gathered in front of the beginnings of the ship, which will be completed next May. “It will continue to inspire Americans to do what’s right.”

He added that the ship will sail around the world assisting people “acting a lot like its U.S. namesake.”

“Everywhere it goes the story of Cesar Chavez will spread and the words ‘si se puede’ (yes you can!) will echo around the world,” Mabus said.

While such praise for nonviolent leadership coming from military leadership is no doubt encouraging, there is a dangerous level of hypocrisy that should not be overlooked. It’s the kind of hypocrisy that has a way of whitewashing history and turning noble dissidents into symbols of the state—thereby extinguishing the true power of their work.

Thankfully the USNS Cesar Chavez is a cargo ship and not a battle ship. Nevertheless, boats of its class—which are part of the T-AKE Program—have served as prisons and fired upon Somali pirates. Neither practice are exactly in keeping with the life and work of Cesar Chavez.

As a Chavez biographer noted in a CNN article:

“We’re talking about a person who believed in nonviolence — the absolute core belief was nonviolence,” said Randy Shaw in San Francisco, where he is the executive director of the Tenderloin Housing Clinic. Shaw also is the author of “Beyond the Fields: Cesar Chavez, the UFW and the Struggle for Justice in the 21st Century,” published in 2008.

“Do you think he would want a military ship named after him?” Shaw asked. “It seems pretty unlikely.”

Perhaps the saddest aspect of this development, however, is that Chavez’s family fully endorses it. In a press release on the Cesar E. Chavez Foundation website, Cesar’s son Paul speaks as though he’s speaking for the military, not his father.

Like his hero, Mahatma Gandhi, “Cesar Chavez was an apostle of nonviolence,” Paul Chavez said. “No one yearns for peace more than those who get sent in harms way during times of war. So it is our hope that this ship will fill out its service during a time when it can help promote peace and democracy in the world.”

Paul Chavez said his father’s “example of nonviolently struggling to fulfill the promise of America for farm workers carried over into other arenas where Latinos battled to realize the promise of equally—in housing, in business, in law, in politics, in government, in the military and in the promise of a quality education for their kids. That is why we must now enact the DREAM Act, so the sons and daughters of immigrants who contribute to America by achieving a college education or serving their country in the armed forces can also earn the right to legal status and citizenship—because among them there are many Cesar Chavezes.”

It seems unlikely that Chavez would have supported the version of the DREAM Act that basically makes poor Latinos prey for military recruiters by being able to offer a path to citizenship through military service. Although he was a Navy veteran, having served in World War II, Chavez had mixed feelings about the experience. According to his official biography on the United Farm Workers website, “He served two years and in addition to discrimination, he experienced strict regimentation.”

All of this reminds me of a phrase I heard recently. It goes something like this: We let our heroes die twice. The second time is when we whitewash their legacies. In a sense, that is far more tragic.

Breaking the silence on rape within the military