The protests that swept through Spain last week, highlighted by the ongoing sit-in at Madrid’s Puerta del Sol, have not surprisingly led some commentators to say that the Arab Spring has arrived in Europe. While the timing should not be ignored, neither should Spain’s unique set of political circumstances, history and culture—which differ greatly from the autocratic regimes of the Middle East.

There’s a reason peaceful protests involving tens of thousands of people erupted in over a hundred Spanish towns and cities for nearly a week to the point where the word “revolution” was being tossed around—however yet premature it may be. Record-high unemployment among young people, much like in Tunisia, may have been the reason most cited, but without the oppression of a dictatorial regime to generate a greater sense of urgency, it clearly took something more to get people talking about revolution. That something may have been a creative vision for a more egalitarian and participatory society forwarded by many of the young artist-types at the head of the organizing. 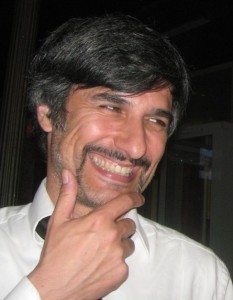 To better understand this phenomenon, Waging Nonviolence spoke with Angel Borrego Cubero, an architect who works on creating alternatives to public space and housing. He also teaches at The Superior Technical School of Architecture of Madrid, which has been a breeding ground for many of the young activists. Cubero has assisted and observed the Puerta del Sol protests and in this interview lends his deep understanding of Spanish culture to a discussion on the embrace of nonviolent methods by protesters, the evolution beyond France 1968-style dissent, and the inspirational role of architecture.

Angel Borrego Cubero: One of the more interesting features of the protests has been the amount of care put into avoiding a single name, a tag, a label that would serve to give it a simple image, but also to excessively frame it. It also has to do with the lack of ideology behind them, the drive to inclusiveness. Most of the names being thrown around sound good enough, but there’s no single correct one for it. Among the ones you put forth, Real Democracy Now is in fact the name of just one of the organizing groups behind the protests. Perhaps the more appropriate or generic names for it are 15M, Spanish Revolution, Take the Street, Take the Square. A caveat has to be made here: Although a part of it is particularly Spanish, many of the fighting points are shared with many other countries, particularly the “Western democracy” model, as blurrily defined by the European Union, United Nations, and any other labeling body.

WNV: A lot has been made about the peacefulness of the protests, as compared to France in 1968. But we have not seen a good explanation as to why. What do you think? Why did the protesters choose peaceful means of expression?

ABC: I think many reasons can be given for this. Some come from the “Spanish Revolution” idiosyncrasies, some from properly understanding the past, in particular May ’68. There’s a wide consensus in Spanish society against violence. Spanish society takes violence against people badly. Having endured a violent separatist movement, ETA [the armed Basque separatist group], that has used terror to pursue its agenda for the entire duration of democracy after Franco, political violence has lost any legitimacy it ever had in any social groups or movements. In that way, political violence has become, thus, something really despised in political and social discussions. It’s a sure fire way to be sidelined from any serious discussion.

Furthermore, protesters in Spain do not want to overthrow a dictatorial government—as is the case in some Islamic states recently—or overhaul the system completely—as was the case of the last serious Western model (May ’68). They instead want profound amendments to what is already there and to make, in fact, a “more perfect” or deeper democracy—one that is more representative of the people, regardless of their ideology: be it liberal, conservative, progressive, libertarian, or socialist. In that respect, it would be pointless to resort to any kind of violence: what against?

One of the beauties of these protests now is the great distance that they have with May’68 without even thinking about it. These protests now are, in more than one way, the formalization of a change of paradigm in society, a society that has grown more mature and sophisticated than the one May’68 constructed.

WNV: There is oftentimes a distinction made between peace and nonviolence. The former implies passivity, while the latter implies confrontation. Clearly there was a shift toward the latter after May 15. What happened? It apparently took three months to plan the demonstration on May 15 in Madrid. But afterward, and in only a few days, wide-spread massive sit-ins were taking place. How did such mobilization take off? Obviously the Internet played a role, but what transformed people’s attitudes and energy?

ABC: Peace and nonviolence are both almost default options of Spanish society. I agree with your distinction and I think you have it spot on in this case of 15-M. There is a case for confrontation against a political status quo that has become somewhat non-representative. But there was extreme care taken to distance the demonstrations completely from one instance of street violence outside Madrid Courthouse at Plaza de Castilla. This care, along with the care taken to keep the demonstrations non partisan and also not anti-system—like the anti-globalization protests of the late 90’s early 00’s that were, in some ways, still in the tradition of May ’68—has made them very popular with society at large. So much so that they have become a place where a young protester can actually meet his or her possibly more conservative parents, who may be just visiting on their own to see what is going on and show sympathy for it.

Of course, the Internet, social networks, both digital and physical, have played a big role. Digital communication has allowed many of the organizers to agree and work on issues sometimes more coolly, without knowing each other, focusing on general issues. It has, so far, only worked in favor of it, releasing the movement from the strain of personal relations, and the need to like each other. The rapid nature of the organization has also prevented it from having a definite face, which in turn has allowed the greater numbers to feel represented, or at least not alienated by a definite representation they might not agree with.

WNV: How what effect did the protests have on the election results?

ABC: We do not really know what would have happened without 15-M, so it is difficult to ascertain what influence it has had. It is more important to see what influence will it have after the elections, and work towards ensuring that it has some positive influence in the near future. It is important to understand that this is not in any way comparable to the Madrid train bombing massacre of 2004, perpetrated three days before the general elections, probably was intended to—and did—have a definite political impact. In this case, it was clear from the start that there was going to be a municipal and regional vote, that it would go ahead regardless, and that this was intended as a wake-up call to the political class. And there was the agreement not to ask for any particular result out of the elections.

WNV: The main criticism of the protesters so far seems to be that the movement doesn’t have a direction or clear objective. Do you think that’s accurate? What do the protesters need to do to keep momentum going?

ABC: It may be so. I do not think it is easy. There’s the dilemma between being too concrete or being too general and it needs to be solved. So far it has gone good. But the dangers are going to become greater very soon. It is a very difficult position to be in. The Spanish Revolution needs to clarify its more general aims and propose a way to achieve those, while at the same time support and give a channel to concrete, easy and well thought out proposals that might be too fast, fresh, radical or difficult to propose and pursue from the established political system. But this is a very difficult question to even try to answer.

WNV: El Pais identified Jon Aguirre Such, a 26-year-old architecture student, as the spokesperson for Real Democracy Now. Is he a colleague of yours? Either way, what connection do you see between architecture and this movement to make Spain a more democratic society?

ABC: I do not know him personally, but Jon Aguirre Such is a recent graduate from my School of Architecture, ETSAM. He is related to Paisaje Transversal, which is a digital repository of ideas and research on architecture and urbanism, and there’s very bright students related to that group—a group also associated to one of the few good urban planners there are. One has to be aware that urban planning has been one of the worse tools invented in the last century, responsible of huge economic and social costs. But this is probably another story.

What I see is that ETSAM is, in a strange way, a lucky place. Without much planning on the part of the school or the university, it benefits from hordes of bright students that are fired-up by a bunch of good professors and professionals. Architects have been through the ages very interested in, say, utopian projects and have the tools to represent these ideas and the drive to propose them, regardless of immediate economic benefit. One can say that architects are well prepared by training to use public space and to help use it. Young people are also used to claiming public space for almost all the wrong reasons as well, such as massive daily or weekly get togethers to drink alcoholic beverages on the streets (the famous Botellón). But I guess, and this is again a guess, that this has given them some training and showed them the possibilities of public space and big numbers.

Why Indigenous activists are occupying the Hamptons until Thanksgiving

The beauty and vision of Spain’s “revolution”