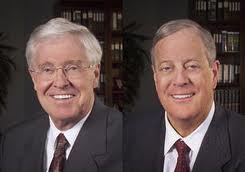 According to a decision issued on Monday, a Utah federal court handed a victory to activists who imitate corporate spokespeople and websites in order to make a political point. (See, for instance, the recent Yes Men action against GE’s tax evasion.) The case was between the group Youth for Climate Truth and the infamous Koch Industries. According to analysis from the Electronic Frontier Foundation:

The case has its origin in a brief action carried out by members of Youth For Climate Truth (YFCT), a group concerned about climate change. The action targeted Koch Industries, a billion dollar company that has publicly challenged the science behind climate change theories. Borrowing “identity correction” techniques pioneered by groups such as the Yes Men, YFCT issued a press release, purportedly from Koch, in which the company promised to stop funding organizations that deny climate change. The release was posted for a few hours on a website (www.koch-inc.com) that partially imitated Koch Industries’ own website. The action received some media coverage, but no press organization thought the release was real. If Koch were sensible, that should have been the end of it.

But Koch was not sensible. It sued YFCT for trademark infringement, cybersquatting, violation of the Computer Fraud and Abuse Act (for allegedly not complying with the terms of service on the real Koch website) and assorted state claims, then issued subpoenas seeking the identities of the YFCT members. With help from lawyers at Public Citizen, YFCT moved to quash the subpoenas and dismiss the case.

Judge Dale Kimball granted the motion and threw the whole thing out. On the trademark claims, the judge noted that YFCT’s activities were clearly noncommercial and, therefore, governed by the First Amendment, not state or federal trademark law.

YFCT’s lawyer, Deepak Gupta of Public Citizen, told The New York Times that he thought the primary motivation for the lawsuit was to expose the identities of the anonymous perpetrators.

“It’s the tail wagging the dog,” Mr. Gupta said of using such accusations “to unmask your critics.”

And it’s more common than you may think, he said, adding that he was able include more than a dozen cases on the subject in his court filing. And tellingly, he notes that some of these cases were withdrawn once an anonymous critic had been exposed.

I asked Andy Bichlbaum of the Yes Men about this, and he said the decision didn’t surprise him. But, he added, “it’s always a relief when things happen according to common sense. A decision in Utah is a great place to start—now on to the rest of the world!”

Video as a weapon in embattled Hebron

Utah court to activists: imitate corporations all you like