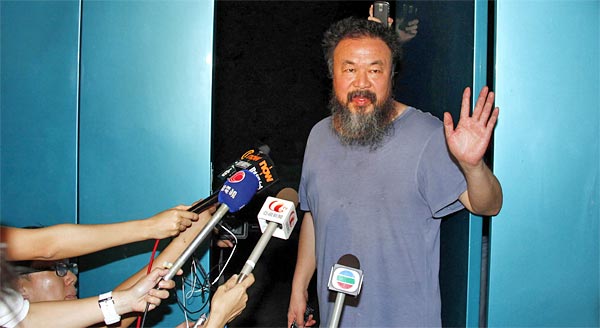 After being held in prison by China without being charged for nearly 3 months, leading Chinese dissident Ai Weiwei was finally released earlier today.

While the Chinese government says that they decided to let Ai go home because he confessed to tax evasion, promised to pay back the money he owes, and has been facing worsening health problems, as the Los Angeles Times explains:

More likely the release was a belated response by Chinese authorities to the international reproach that followed Ai’s arrest April 3 at the Beijing Airport.

While dozens of others have been arrested over the last six months in a crackdown on activists, it was Ai — by dint of his stature in the art world — who inspired petitions and demonstrations across the world. In London, the Tate Gallery installed large black letters across its facade reading, “Free Ai Weiwei.” In New York, a Cuban artist used a slide projector at night to cast the artist’s face onto the Chinese consulate.

As Phelim Kine, an Asia researcher with Human Rights Watch said in a statement:

The public announcement of his release signals that the Chinese government has had to respond to international pressure and that the cost/benefit ratio of continuing to detain him was no longer tenable.

Nevertheless, this victory is far from complete. It appears that Ai is unable to speak about what happened to him as a condition of his bail, and there are still hundreds of lesser-known Chinese lawyers, activists and intellectuals who have been arrested in the ongoing crackdown by Chinese authorities, which began in February, and remain in custody.

8 skills of a well-trained activist