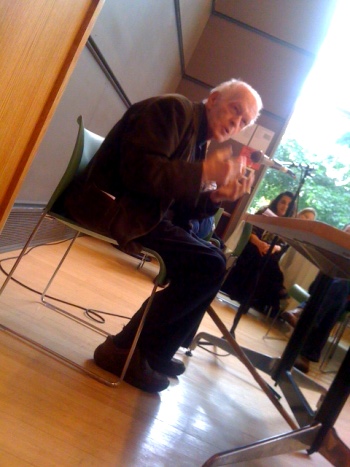 Gene Sharp, the leading theorist of nonviolent resistance alive today, doesn’t speak in public much anymore. He has been giving a lot of interviews in the last few months, to be sure—including one with me—and an exciting documentary about him is soon to be released. A new book, Sharp’s Dictionary of Power and Struggle, is forthcoming from Oxford. Revolutions whose planners have learned from his work are taking place all around the world. But, among these and so many other things, he is 83 years old. Giving speeches isn’t as easy as it used to be.

Today, though, he came to Tufts University and spoke to the activists, journalists, and scholars gathered for the International Center on Nonviolent Conflict‘s Fletcher Summer Institute. What an incredible treat—as excellent as it is rare. He reflected on the triumphs of nonviolent struggle over the course of the last century and the climax it has reached this year in the ongoing Arab Spring. At the end, he took questions, and among his concluding words were these, concerning the limits of what nonviolent struggle can and can’t accomplish:

I’ve never focused on answering that question, on what it can’t do. I focus on what it has done—and therefore it could probably do at least that much in the future. How much can we push back that barrier of impossibility? If we can’t push back that barrier of impossibility, then violence will be used, and that will be out of my control. But if we can keep pushing it back, and revealing that nonviolent struggle can do much more than was ever expected, then pretty soon there will be almost nothing left for violence.

Listen to the whole lecture, beginning with an introduction by Erica Chenoweth, herself one of Sharp’s most promising successors:

Gene Sharp: The barrier of impossibility