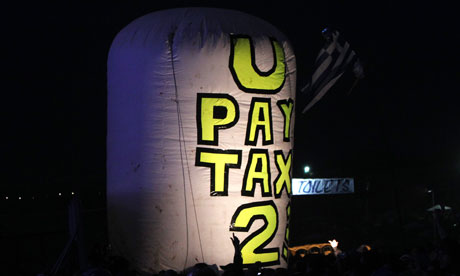 As U2 took to the stage at the Glastonbury festival last Friday, activists with Art Uncut – an offshoot of UK Uncut – inflated a 9ft-wide, 20ft-high balloon that carried the message: “U Pay Tax 2.”

Despite having permission from the festival’s organizers for the creative protest, security used excessive force, including breaking a finger of one of the activists involved, as they quickly brought down the balloon.

Nevertheless, the protest was widely covered in the mainstream media, with images of the action appearing on the BBC and many national newspapers. In the Guardian, Art Uncut founder and co-organizer Philip Goff explained the purpose of their protest:

The narrower point was to raise concerns about the irresponsible way U2 arrange their tax affairs. In 2006 U2 Ltd moved most of its tax affairs to Holland, seemingly in response to the Irish government’s decision to cap the tax-free exemption on royalties at €225,000 (before this, artists in Ireland were not obliged to pay any tax on royalties). Our concern is that when individuals and corporations “shop around” different countries for the best tax deal, this puts pressure on governments all round the world to lower their tax rates, which results in an ever-dwindling proportion of profits going to governments to spend on schools, hospitals and public services. Given the financial difficulties in the group’s native country right now, any tax revenue denied to Ireland hurts badly.

The broader point of the protest was to raise awareness of the connection between tax ethics and development. Christian Aid estimates that $160bn, more than the global aid budget, is lost every year to the developing world from multinational tax dodging. It’s clear that if we’re serious about making developing countries richer, we need individuals and corporations to take a much more ethical and responsible approach to their tax affairs.

Art Uncut aims to bring about a culture shift, to create a world where people automatically and instinctively think about tax ethically. We’re not claiming that individuals have a duty to pay as much tax as possible. Rather each of us has a duty to think about tax in an ethical context, to ask questions such as: what’s my fair share? What do I owe to the country that paid for my healthcare and education? What’s the spirit as well as the letter of the law? What effect does how I arrange my tax affairs have on the globe?

Second, we want to encourage consumers to make tax one consideration in their choice of which artists to support, or which companies to buy from; just as environmental considerations already figure in these decisions. We want to see a world in five years’ time when credible musicians just don’t do what U2 Ltd did, because they know the public won’t support it.

In London, young mothers declare they will not be moved