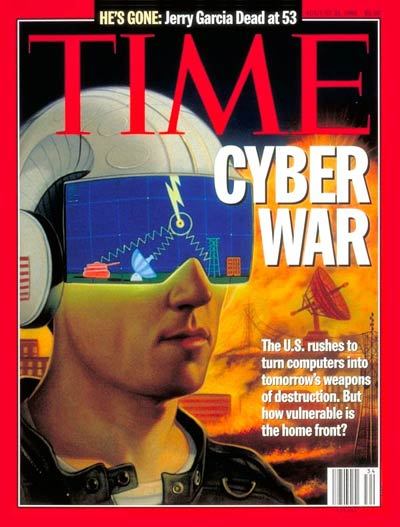 One might think that three wars—Afghanistan, Iraq, Libya—would be enough. Apparently, for the United States military apparatus, it’s not. Last month we noted that Congress is trying to amend the War on Terror authorization so as to include conflicts that have no direct relationship to attacks on US soil. Now, there’s word from the Pentagon that cyber attacks on US interests could be grounds for armed retaliation too. Reports the BBC:

In future, a US president could consider economic sanctions, cyber-retaliation or a military strike if key US computer systems were attacked, officials have said recently.

The planning was given added urgency by a cyber-attack last month on the defence contractor, Lockheed Martin.

A new report from the Pentagon is due out in a matter of weeks.

“A response to a cyber-incident or attack on the US would not necessarily be a cyber-response. All appropriate options would be on the table,” Pentagon spokesman Colonel Dave Lapan told reporters on Tuesday.

AntiWar.com points out that, by this logic, the Iranians are already justified in attacking the US with missiles, considering all the hackers the Pentagon has pointed at them.

When they come, the Pentagon seems to be assuming, we’ll be ready for ’em. That’s why it has also just announced a plan to vastly expand its fleet of unmanned arial vehicles—armed, remote-controlled drones. These are the same weapons that have made it possible to carry on a shadow war for years now on the Pakistani frontier without need to officially declare that it is happening. With every new gizmo, apparently, it becomes easier and easier to justify killing.

It is a common hope that the latest technologies—smart bombs, stealth bombers, drones, cyber-attacks, and more—will save lives. In the short term, and in a narrow view of whose lives we’re concerned about, this may be true. But each makes violence easier to justify politically, by promising victory at the expense of fewer lives on one’s own side, and therefore each has the effect of bringing us closer to—if we’re not there already—a dystopian scenario of perpetual war. Opposing weapons like this is ostensibly tougher than opposing, say, nuclear weapons; there’s no instant cataclysm, no blinding light. What they promise, instead, is the dull hum of tit-for-tat killing—manageable, profitable, ignorable, almost sustainable, and yet a total, indefensible waste.

In Uganda, an activist’s resurrection is a victory for a growing movement