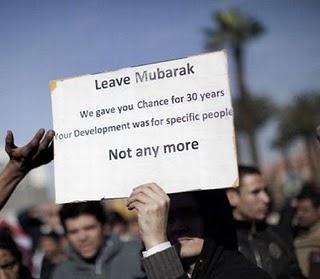 While the people of Tunisia and Egypt have successfully removed the US-backed dictators that ruled their respective countries, the path to real democracy is still long and precarious. One serious threat emerged last week as the G8 pledged billions of dollars in aid to the two countries to promote “economic stability.”

As Liz Alderman rightly notes for the New York Times, “poor job opportunities are among the major factors that prompted the outpouring of unrest among young people in Egypt and Tunisia.” Revealing her own bias, however, Alderman never discusses the cause of the economic woes of these countries, but goes on to warn that:

Old leftist political parties are re-emerging as though they have been frozen in time for the 30 years of the Mubarak police state to demand that the government again expand its role in the economy to help the poor, even at the price of discouraging foreign investors.

In Tunisia, too, old leftist parties are trying to come back, and parts of the country’s strong labor movement are stepping up their demands or returning to radical roots.

In response to these troublesome developments, she writes that “the projected $20 billion in aid from international financial institutions would come in phases and be contingent on democratic and economic reforms,” that would include “broadening economic opportunity and breaking down trade barriers; Egypt, seeking to protect state industries, has some of the highest in the world.”

Over at the Guardian, Austin Mackell argues that much like what happened in South Africa as it transitioned to democracy, in Egypt the wealthy countries, through forces like the IMF, are essentially seeking “to lock in and enlarge the neoliberal project before there is an accountable government to complain about it.”

What’s most audacious about this news is that one of the primary reasons the economies of Tunisia and Egypt are in such bad shape to begin with is because they have already diligently followed the IMF’s neoliberal prescriptions. As Richard Javad Heydarian explains at Foreign Policy in Focus:

In the last three decades, Ben Ali in Tunisia and Anwar Sadat and Hosni Mubarak in Egypt abandoned the more egalitarian and welfare-oriented policies of their predecessors in favor of economic opening and deregulation. The IMF and World Bank have touted Egypt and Tunisia’s economic reform as regional cases of globalization’s success. Both countries registered good scores on major economic liberalization and openness indexes. Both received good rankings in the 2009-10 Economic Competitiveness Index. Tunisia, ranked 32nd, placed above Lithuania, Brazil, and Turkey, while Egypt, ranked 70th, is higher than Greece and Croatia. In the KOF Globalization index, which rates the diffusion of government policies, Egypt and Tunisia rank 12th and 35th respectively. Egypt, considered one of the hottest emerging economies in the world, is part of the CIVETS (Colombia, Indonesia, Vietnam, Egypt, Turkey, South Africa), and Tunisia has been a leading Arab country in free trade and economic liberalization. The two countries have been the face of economic globalization in the Arab world.

The results of these economic reforms, which were imposed by the IMF in the form of “structural adjustment programs,” were both devastating and entirely predictable.

…Arab autocrats used economic liberalization as an opportunity to transfer welfare responsibilities to the private sector, establish new patterns of patronage by favoring selected clients during bidding processes and privatization schemes, and enrich their military allies by granting them access to major businesses and investments. The product was crony capitalism: high levels of corruption, poor state services, and absence of a decisive and developmental state.

As Walter Armbrust writes at Al Jazeera in an in-depth article that lays out the case that the revolutions in Egypt and Tunisia were not only against their dictators, but also against neoliberalism:

The only people for whom Egyptian neoliberalism worked “by the book” were the most vulnerable members of society, and their experience with neoliberalism was not a pretty picture. Organised labor was fiercely suppressed. The public education and the health care systems were gutted by a combination of neglect and privatization. Much of the population suffered stagnant or falling wages relative to inflation. Official unemployment was estimated at approximately 9.4% last year (and much higher for the youth who spearheaded the January 25th Revolution), and about 20% of the population is said to live below a poverty line defined as $2 per day per person.

These outcomes were not mistakes, but as Naomi Klein documents in her fantastic book The Shock Doctrine, strikingly similar to what neoliberalism has accomplished the world over.

Despite the fact that the IMF and World Bank have often historically stepped in during these transition periods to democracy to ensure that whatever government is elected doesn’t rock the boat when it comes to economic policy, Walden Bello argues that the Arab Spring may be able to chart a different course, because:

…neoliberal pro-market reforms are in severe disrepute, which was not the case in the 1980s and 1990s. The liberalization of capital flows has provoked several crises, including the current global downturn, while trade liberalization has resulted in the displacement of local agricultural producers and local manufacturers by foreign imports. More than at any other time since the Reagan-Thatcher neoliberal revolution in the 1980s, radical free market solutions lack credibility.

We can only hope that the people and activists in Egypt and Tunisia have enough foresight to see the G8’s offer of “aid” for what it is: a siren song that could gut their revolutions of much of their meaning.

How can nations best prepare to face a pandemic or climate crisis?

The neoliberal threat to the Arab Spring