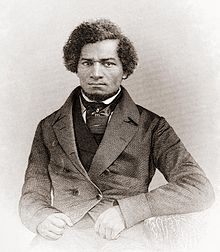 It’s a little-appreciated fact that Frederick Douglass, a man born in slavery who became a famous orator and an advisor to President Lincoln, had an especially perceptive grasp of how nonviolent struggle works. (Some times more than others, he was also an outspoken pacifist.) Jack DuVall, president of the International Center on Nonviolent Conflict, often makes note of this in his talks and writings. In a lecture in Spain a few months ago, DuVall said the following:

The first thinker or writer who I feel had the modern understanding … of how civil resistance works is this man, Frederick Douglass, the great African-American campaigner for the rights of his people, both before and after the American Civil War. Listen to what he said. This is one of the greatest statements that has ever been made, in my judgment. He said, “Power concedes nothing, and it never will.” You’re not going to get a grant of freedom. “Find out what any people will quietly submit to, and you’ve found out the exact measure of the injustice and wrong which will be imposed on them.” Don’t expect any state to give you justice. You’re going to have to demand it. These injustices “will continue until they are resisted.”

There’s evidence of this understanding in a speech Douglass gave on the Fourth of July, 1852, in Rochester, New York. He praises the fight for justice and self-determination of the American colonists who, before an all-out war began, waged a nonviolent campaign against British rule.

They were peace men; but they preferred revolution to peaceful submission to bondage. They were quiet men; but they did not shrink from agitating against oppression. They showed forbearance; but that they knew its limits. They believed in order; but not in the order of tyranny. With them, nothing was “settled” that was not right. With them, justice, liberty and humanity were “final”; not slavery and oppression. You may well cherish the memory of such men. They were great in their day and generation. Their solid manhood stands out the more as we contrast it with these degenerate times.

How circumspect, exact and proportionate were all their movements! How unlike the politicians of an hour! Their statesmanship looked beyond the passing moment, and stretched away in strength into the distant future. They seized upon eternal principles, and set a glorious example in their defence. Mark them! Fully appreciating the hardships to be encountered, firmly believing in the right of their cause, honorably inviting the scrutiny of an on-looking world, reverently appealing to heaven to attest their sincerity, soundly comprehending the solemn responsibility they were about to assume, wisely measuring the terrible odds against them, your fathers, the fathers of this republic, did, most deliberately, under the inspiration of a glorious patriotism, and with a sublime faith in the great principles of justice and freedom, lay deep, the corner-stone of the national super-structure, which has risen and still rises in grandeur around you.

Isn’t there something odd here, though? We remember Douglass now as one of our greatest fellow Americans—or so we should. But why does he speak like this, in the second-person? “Your fathers”? “Around you“?

I was recently reminded in passing—in the middle of a conversation about making a flag cake, actually—that Frederick Douglass didn’t celebrate Independence Day. Of course. How could he? Douglass was born a slave. This country’s independence was not his own, or his people’s.

That, in fact, is what the 1852 speech is really about. A bit later on, he makes his meaning more plain.

The blessings in which you, this day, rejoice, are not enjoyed in common. The rich inheritance of justice, liberty, prosperity and independence, bequeathed by your fathers, is shared by you, not by me. The sunlight that brought light and healing to you, has brought stripes and death to me. This Fourth July is yours, not mine. You may rejoice, I must mourn. To drag a man in fetters into the grand illuminated temple of liberty, and call upon him to join you in joyous anthems, were inhuman mockery and sacrilegious irony. Do you mean, citizens, to mock me, by asking me to speak to-day?

Douglass’ America is Babylon. He recites Psalm 137, a song of the Israelites in exile: “For there, they that carried us away captive, required of us a song; and they who wasted us required of us mirth, saying, Sing us one of the songs of Zion. How can we sing the Lord’s song in a strange land?”

What, to the American slave, is your 4th of July? I answer; a day that reveals to him, more than all other days in the year, the gross injustice and cruelty to which he is the constant victim. To him, your celebration is a sham; your boasted liberty, an unholy license; your national greatness, swelling vanity; your sounds of rejoicing are empty and heartless; your denunciation of tyrants, brass fronted impudence; your shouts of liberty and equality, hollow mockery; your prayers and hymns, your sermons and thanksgivings, with all your religious parade and solemnity, are, to Him, mere bombast, fraud, deception, impiety, and hypocrisy—a thin veil to cover up crimes which would disgrace a nation of savages. There is not a nation on the earth guilty of practices more shocking and bloody than are the people of the United States, at this very hour.

Perhaps Douglass should have changed his second-person address to first-person plural. Can any of us can really sing the Lord’s song in a land where some are in chains?

Whether one celebrates the Fourth of July or not is, I think, a matter of personal conscience. If one does, it’s how that matters. (Recalling Douglass would be a good way to start.) And, in either case, may all Americans take this day of fireworks, of pride, of bravado, to reflect on what we can do to help our country live up to the still-unfulfilled promises upon which it was founded, and then some.

Imagine if everyday were 9/11. For one community in the US, it is.

How communities are using direct democracy to shape city budgets