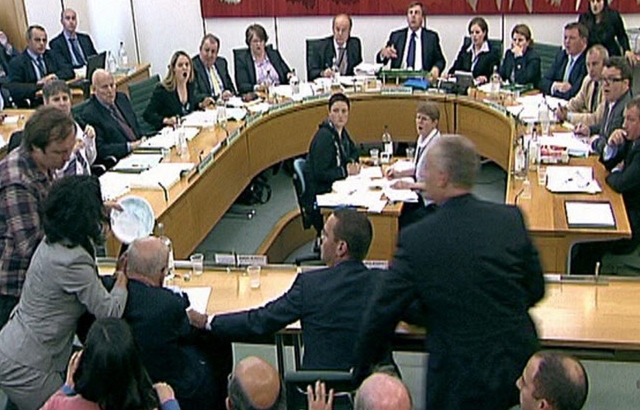 How is it that despite thousands of people in the streets of Sanaa, Casablanca, Bissau and Rangoon, the top protest story of the past day is Rupert Murdoch getting a pie in the face? On the one hand this News Corp. scandal is justifiably a big deal and the kind of public scrutiny foisted upon Murdoch has been a long time coming. But on the other hand, does a pie in the face really deserve top billing and constant replays on CNN, MSNBC and surprisingly even Fox?

After my initial frustration at the second-class news status given to people risking their lives to end oppressive regimes, I realized that there might be something to the whole pie-in-the-face protest—something that we often talk about on this site as a successful strategy: humor. Not only does the action lend itself to such irresistible headlines as “Just Dessert” and “Humble Pie,” but it dissolves a quiet tension that might allow for greater public outcry.

Perhaps going a bit over the top, the Vancouver Sun interviewed a sociologist at the University of British Columbia on this point:

Pieing someone in the face is a form of protest that is relatively harmless and gets people’s attention quickly, said Christopher Schneider, a sociologist at the University of British Columbia.

“By the very nature of its definition, a protest is supposed to be disruptive,” Schneider said. It should get people’s attention without being harmful, he said.

At a time when protests are scripted, require permits and are confined to special protest zones, slapping a pie in someone’s face gets a lot of media attention. It’s also funny.

“It’s very difficult with all of that (symbolism) to redefine the pie as being a harmful, dangerous assault.”

The public will usually dismiss it, even when criminal charges are laid.

Before anyone thinks I’m advocating a pie-in-the-face as a legitimate protest tactic, let us now consider its shortcomings—of which there are many.

First off, what’s funny is always a subjective matter. Not everyone is going to think shoving a pie in an 80-year-old man’s face is funny. In fact, many will be turned off by it. Here’s what The New Republic‘s T.A. Frank had to say on that point:

I can’t find anyone who approves of what happened yesterday, when news titan Rupert Murdoch suffered a near-shaving-cream-pie in the face during a hearing before members of Parliament in London. Everyone seems to agree that the pie-thrower, “activist” Jonnie Marbles, is a dumbass. We even seem to agree that Rupert Murdoch’s wife, Wendi Deng, is a badass. (If you’re late to the story, Wendi personally lunged at Marbles and smacked him on the head. Sadly, no black eye was administered.)

Frank is right. If you watch the video, the only thing you can see clearly is Murdoch’s wife reacting with hair-trigger reflexes. She’s the star of the video. Not Jonnie Marbles.

Frank also points out that none of these pie-in-the-face videos are really all that funny. The idea is funny, perhaps, but the execution never is.

Being a conscientious journalist, I’ve watched a lot of pie-attack videos in the last 24 hours. One thing they have in common is that they’re not funny. And I don’t just mean that I don’t find them funny. Watch a few of them. Here’s Anita Bryant getting pied. Here’s Bill Gates getting pied. Here’s Ann Coulter getting pied. Does any of them make you laugh? Does anybody in any of the videos laugh? Invariably, the response of the gathered crowd is alarm followed by disgust. A whiff of chaos, of a broken social compact, is in the air. Everyone is shaken.

More to the point, Frank argues that “pie-throwing amounts to the most violent way possible to attack someone powerful without being likely to get in trouble for it.”

A common defense of pie-throwing is that it’s, well, just a pie. But, of course, the person getting attacked has no idea what the hell is about to hit him or her. In 1976, during a campaign appearance in his first run for the U.S. Senate, Pat Moynihan got pied by a Yippie yelling “Fascist pig.” Moynihan, a child of Hell’s Kitchen, was no softie, “but it scared the hell out of me,” he told The New York Times. It had been “a violent act.”

The defense that the fear lasts only a short while—between the time you first notice you’re being attacked and the time you realize it’s just a pie—doesn’t work, either. If fleeting fear were no problem, then mock executions would be just hilarious.

Finally, though, it’s important to note that humor and fear are, more or less, side effects of the action—not the purpose. Frank believes pie-throwing is motivated by a desire to “degrade and humiliate.” On those grounds, as he suggests, it’s hard to praise. After all, Gandhi didn’t help India achieve its independence through shaming its opponent. One of the greatest accolades he ever received was from British historian Arnold Toynbee, who wrote “Gandhi made it impossible for us to go on ruling India, but he made it possible to leave with dignity.”

Of course, seeking some kind of citizen justice against an evil media mogul isn’t the same thing as taking down an imperialist oppressor. They’re different issues entirely and the former is probably more likely to inspire stupid and silly actions than the latter. But if you want to make a statement that the majority of people will embrace, it’s worth looking at the way nonviolent movements work. They understand the dynamic that sways public sympathy.

The pie-thrower himself, Jonnie Marbles, seemed close to realizing that in a piece he wrote for the Guardian today:

I worried, too, that my clowning would detract from the scandal, or provide sympathy for Murdoch. Believe it or not, I even worried about Rupert Murdoch’s feelings.

Ultimately, though, he excused himself and his actions as a means of reminding everyone that Murdoch is a mere mortal, but “one who has got far too big for his boots.” It’s a legitimate message, no doubt. But if you have to spell it out like that, you have to wonder if there’s something wrong with the presentation.

The banality of injustice for Bradley Manning

On the morality of pie-throwing