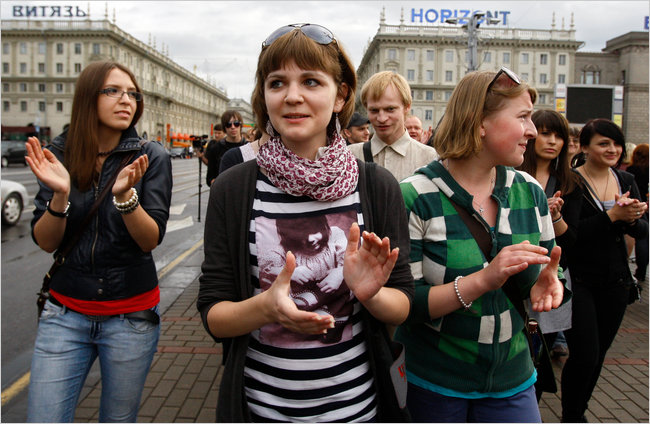 Radio Free Europe/Radio Liberty compiled an interesting list of some of the more creative protests around the world, from Russia and Iran to Azerbaijan and Ukraine, over the last couple years. One of my favorites has happened this summer in Belarus:

Sick and tired of crushing economic hardship and political humiliation at the hands of “Europe’s last dictator,” Belarusians countered the latest clampdown over a fraudulent presidential election by utterly transforming an everyday gesture of approval. People came out in the thousands in more than 30 cities around the country to do nothing more than clap their hands, setting off a firestorm of state thuggery. Even as audiences put their hands together to welcome President Alyaksandr Lukashenka at carefully orchestrated official events, questions inevitably arose as to whether or not it was “OK” to applaud.

With Lukashenka’s plainclothed security forces frantically descending on applauders weeks into the “silent demonstrations,” activists turned to another seemingly innocuous act to register their dissatisfaction, with throngs of people setting their mobile phones to ring at exactly 8:00 p.m. on July 13.

After acknowledging the creativity of this protest, the New York Times questioned its ultimate effectiveness:

The “alarm clock action,” as some have dubbed it, sought to minimize arrests, and in that sense, it worked. But at 8 p.m. the cellphone alarms were barely audible over the noise of passing traffic, and by the time they went silent — about a minute later — it hardly felt as if anything had taken place.

While this concern is valid, I think Ellen Barry, who wrote the piece, misunderstands the power that these types of actions can have and the role they generally play in movement building. Many successful nonviolent movements have begun with symbolic actions that allow for anonymity, like that banging of pots and pans in Chile or the flashing of lights, because they build solidarity and show participants that they are not alone. That said, to be effective, nonviolent movements eventually need to move from these symbolic actions to ones that put greater pressure on the regime that is being challenged, like strikes and boycotts.

A recent article for the Christian Science Monitor, Jason Motlagh reports on other interesting tactics being employed in Belarus in response to the repression:

Some activists have started filming police brutalities – including protesters being kicked on the ground by police officers in tracksuits – and making homemade DVDs of them. The faces of some offenders have then been printed on leaflets designed to resemble Wild West-style wanted posters.

The flyers and DVDs, in turn, are being distributed at night in the mailboxes of working class families who largely get their news from state-run media and have grown politically passive under Belarusian President Alexander Grigoryevich Lukashenko, the former collective farm manager who has ruled the country for the past 17 years.

According to one activist who asked that his name not be used out of fear of reprisal, some youth have even started going around park benches in the capital with cell phones and laptops showing videos of police abuse to the elderly.

Protesters getting creative in Belarus