“Please use your liberty to promote ours.” –Aung San Suu Kyi, leader of Burma’s National League for Democracy 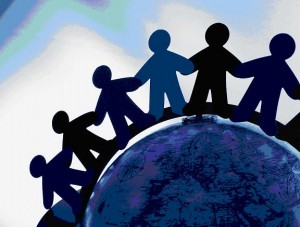 As I get ready to celebrate this Independence Day by barbecuing and watching fireworks with my family this evening, I can’t help but think about what this holiday must look like from the outside. We are celebrating the day that Americans threw off the bonds of tyranny and claimed self-determination for ourselves. Although the verse declaring that “We hold these truths to be self-evident” is more well-known, the opening salvo of the Declaration of Independence is especially worthy of reflection today:

When, in the course of human events, it becomes necessary for one people to dissolve the political bands which have connected them with another, and to assume among the powers of the earth, the separate and equal station to which the laws of nature and of nature’s God entitle them…

These eloquent words have inspired people through the years and across the world. Integral to their beauty is their universality: the notion that “one people” have the implicit right to declare their independence from another and to undertake the endeavor of self-governance. But this begs the question. Once this implicit right is claimed by one people—Americans—how can it be justifiably denied to others? I can’t help but wonder whether my Palestinian, Tibetan, East Timorese, West Papuan, Kurdish, and Kosovar colleagues are asking themselves this very question today.

To the extent that Americans know about the nonviolent anti-occupation movements in Gaza and Tibet, for example, these struggles are hardly embraced with the same enthusiasm as we have for our own (largely violent, I should add) history of resistance to British rule. It’s one thing to not take an interest in someone else’s struggle for freedom. It’s quite another to gleefully celebrate your own liberty—which came at the hands of a determined resistance campaign (can anyone imagine the British celebrating the American Fourth of July?)—while simultaneously using that liberty to help deprive others of theirs.

As I write this, the world is waiting anxiously to see how the Israeli government will deal with the dilemma created for it by second Gaza Flotilla—a series of ships packed with humanitarian supplies and people determined to nonviolently show solidarity with the Palestinian people under occupation. And although the world has largely either forgotten about or given up on Tibet, the people of that region continue daily to resist the long and brutal occupation by China and fight for their self-determination with a degree of spiritual will that is truly breathtaking.

What makes the people of Palestine and Tibet less worthy of self-determination than the Americans of 1776? Like our own founding fathers, these peoples have demanded that the political bonds that tie them to another be dissolved. And of all people, Americans should be the most sympathetic of the desire by Palestinians and Tibetans to assume the separate and equal station to which the laws of nature entitle them. However, unlike Americans in 1776, both of these peoples have a long and proud history of self-rule, a strong precedent from which to pursue it again.

As Americans, how can we enjoy our own independence while watching others be deprived of theirs? Is that really how the founding fathers meant this principle to be employed? Do we really want to promote such egregious hypocrisy on a day that should be about universal values?

On Independence Day, as we celebrate the principle that all humans are entitled to life, liberty, and dignity, we should take a moment to reflect on whether and to what extent we as Americans actually use our liberty to promote for others all the natural rights that come with a separate and equal station.

Dr. Cynthia Boaz is assistant professor of political science at Sonoma State University, where her areas of expertise include quality of democracy, political development, nonviolent struggle, civil resistance, and political communication and media. She is also an analyst and consultant on nonviolent action, with special emphasis on the Iran and Burma cases. Dr. Boaz is also a contributing writer and adviser to Truthout.org and associate editor of Peace and Change Journal.

Must we change our hearts before throwing off our chains?

The violence of Andrew Breitbart

Arizonans: Get a Job and Fight Illegal Immigration at the Same Time

The obligations of independence