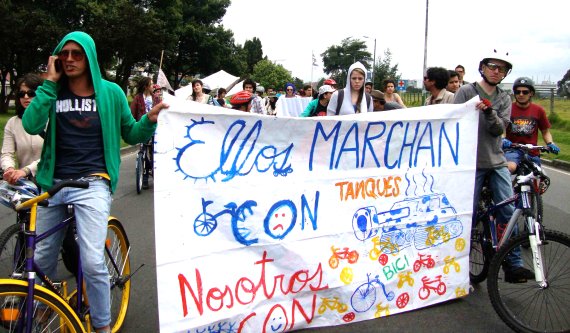 It has been a year since I came back to Bogotá after two years living in Egypt, where I got to know some of the young people leading nonviolent protests and cultural activities. If I had been part of the Mubarak government, I couldn’t have planned it better; I left Cairo just five months before the revolution began. As I followed the news of what was happening there in February and March, I was here in Colombia, but a part of me was over there, hoping to see change, waiting to be part of it.

Cairo was a tough place to be—so hot, so brown, and hard for a woman, especially a woman who comes from green mountains, from a country with uncountable rivers, lagoons, and lakes. But what I missed the most while living there was my bike. I never saw a woman cycling, nor a businessman. Bread deliverers were on bikes, along with the very badly-paid workers risking their lives on a daily basis by crossing the 23-kilometer-long bridges that go through Giza and Zamalek to Heliopolis. Besides them, it was just a few foreigners living in wealthy neighborhoods dared to use a “steel horse” to go around on weekends.

I hope that’s changing. Still glued to the news from Egypt, I recently saw a picture of veiled women cycling there and thought proudly about one of the main goals of the recent struggle: elevating the position of women in public sphere, increasing their mobility, and challenging assumptions about women’s roles and limitations.

In Cairo I missed the feeling of freedom that bicycling gives, and the free circulation of body and mind between the traffic jams and hurried pedestrians. The first thing I did when I came back was repair my bike, which had been damaged by misuse, and ride around on it, rediscovering my city and exploring what had changed while I was gone.

Bogotá is now a very chaotic place, with traffic jams everywhere, all the time. Its public transportation system is degrading, and there is still no subway, even though there are now nine million of us. All that people seem to want here is a house and a car, repeating the consumerist mantras of consumption, well-being, and self-satisfaction. But there’s good news, too. As transportation in the city becomes ever more scandalous, a lot of collective initiatives are arrising to change people’s mentality towards mobility and public space.

During the last six months, I have been following the the groups that advocate for the use of bicycles instead of cars: Ciclopaseos de los Miércoles (Wednesday Rides), Mejor en Bici (Better by Bike), and La Redada (The Raid). What I found especially interesting is how—without always knowing the full political implications—their advocacy is inviting people to create nonviolent responses to the endemic violence of the city.

One of the activists talks about these rides as moving heterotopias, in the terms of French social theorist Michel Foucault: a mobile, non-hegemonic space. For cyclists in Bogotá today, a mode of transportation has become a way to resist and to raise awareness about the need for inclusion and social transformation.