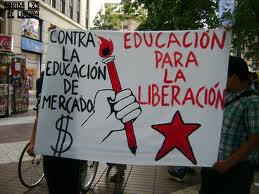 A few months back, when I first heard about the student movement in Chile, Olivera’s movie The Night of the Pencils came to mind. The movie takes place in neighboring Argentina and tells the story of seven students who were captured, tortured, and killed by the regime for demanding lower bus fares. Fortunately, that kind of dictatorship is a thing of the past in both Argentina and Chile, but the struggle for a better educational system, and broader access to it, continues. Today, Chile is in its second day of a 48-hour general strike; just yesterday more than 100 people were injured in clashes.

Over the course of this year, uprisings among people longing for better living conditions and systemic transformation have seemed unstoppable. Yet despite the simultaneity, continuity, and frequency of these events around the world, each one has its own particular history and context that have to be taken into account.

As is well-known in South America, Chile’s student movement took the lead in resistance against the dictatorial regime of Pinochet’s military junta, beginning in the 1970s. Nevertheless, it was Pinochet who laid the groundwork for the privatization and decentralization of secondary and university education. Once the transition actually began in 1990, the students made themselves heard, but the eventual reform didn’t take account of their demands. The streets of Santiago have often been packed with protesting students, crossing lines of age, status, and origin. In 2006 around 100,000 high school students clamored for a series of changes, including access to the Pase Escolar, a student pass with transportation and food benefits. On May 30th of that year, the protest peaked with more than 600,000 students. Then, their demands were at least heard,  forcing former president Michelle Bachelet to address the students publicly and directly, promising a reform that never actually came about.

It isn’t just the students who take to the streets in Chile, though. The Mapuches, the local indigenous group, have protested as well. Last year there was also an environmentalist movement opposing the construction of enormous reservoirs in the Chilean Patagonia, and social networking has been used to advocate internationally for the protection of natural diversity and reservoirs across the country. Chilean civil society is habitually active. Since the return of democracy in the late 1990s, Chileans have treated their citizenship not just as a right to be taken for granted, but as a responsibility.

Five years after the last mass student uprising, Chileans are now taking part in one of the biggest social movements in their history. While students took the lead, it now includes diverse sectors of society, from all around the country, calling for a broad range of demands including reforms in the political system, taxation, education, and health care.

In their homes and offices, as well as in the streets, demonstrators are banging pots and pans, and using music and art as their weapons. The CUT (Workers United Center) is supporting the student protest with an effort to temporarily paralyze the country. Both students and workers have agreed on the independency and autonomy of the movement, despite the accusations of right-wingers who claim that it is being orchestrated by communist parties.

Recently Raúl de La Puente, president of the ANEF (National Society of Public Officials), said that the protest is bringing people together around an ideal that goes further than mere education reform. More and more, people are angry about how the private sector profits from the economy as a whole while things grow worse for the general public. Also, the movement has shed light on the government’s inability to deal with and respond to people’s demands, since the president and much of his cabinet are businessmen who have little sympathy for collective action and social movements, and who lack the capacity to negotiate or build consensus.

Chile has been a democracy for more than 20 years, but merely instituting democracy as a political system doesn’t ensure the democratization of education and health care, or the redistribution of wealth. This is what the student movement stands for. So far the government has failed to regulate profits and costs in the country’s education system; even public schools are among the most expensive in Latin America, and for many students the only way to afford an education is resorting to loans. Most undergraduates come out of college with debt between $40,000 and $60,000, plus high interest rates that condemn their entire working lives to the service of debt.

An education-reform bill was issued by the recently-elected President Sebastian Piñera in July, but it was rejected by the movement for failing to satisfy the students’ demands. At this point, however, neither the students nor the workers seem prepared to give up.

Chile’s student movement, the latest in an endless spring