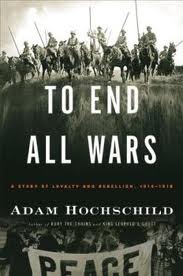 Adam Hochschild is a National Book Award-nominated author and co-founder of Mother Jones. His work has brought alive the plight of history’s victims, from the Belgian Congo to Stalin’s Russia. In his new book, To End All Wars, Hochschild, an American, turns to the British experience of the First World War.

While the horrors that faced the ordinary soldier on the Western Front occupy a central place in the popular history of modern war, Hochschild focuses on a less-well known group of losers—those British citizens who passionately resisted the war, from socialist agitators to radical suffragettes to embittered enlisted men. In a montage of personal portraits and family dramas, Hochschild shows us how a relatively few, outspoken women and men from every class of society sought to prevent, and then to end quickly and fairly, what they saw as a hopeless conflict organized by out-of-touch men of privilege.

World War I famously inaugurated the modern age of total war, but Hochschild’s protagonists believed in an alternative modernity, one characterized by transnationalism, sexual and racial equality, and economic justice. To End All Wars takes us back to a time when such an enlightened world could seem less a utopia than a reasonable alternative to the ruling class’s livid fantasies of imperial and colonial dominion.

You approach the totality of the war through miniature, through partiality. When taking up the project, did you say, “I want to tell a new story about World War I, how do I do it?” Or did you have the idea of doing a character-driven study of World War I first?

For years, I’ve been fascinated by World War I: the destructiveness, the foolish expectations, the way it changed everything, the nobility of those who resisted taking part. I wanted to evoke what it was like to live through that period, and to live through it, on the part of the resisters, feeling faced with a difficult moral choice.

I like to tell history through assembling a group of characters, and so I went about assembling a cast for this story. The casting calls took years! I was a year and a half into the research before it occurred to me I should center it around some divided families, and make most of the other characters connect to them in one way or another. From then on it became easier to see the book’s shape.

I found To End All Wars rather subtle from an ideological point of view. It is clearly an anti-war book—whatever that means—but there’s something hard-to-define about its politics. On the one hand, someone could read the book and say: “This is a poignant story about the tragedy of war, one that drives home how insane and terrible the Great War was.” And that’s true. But it also has a more basic kind of anti-war sensibility.

I do think of the book, and myself, as having an anti-war sensibility. I find much to admire in the spirit of the pre-WWI socialists, people like Jaurès and Hardie. But today we would have to say they were naïve in their expectation that class loyalties would prove stronger than national ones. I still like their spirit, however.

Is To End All Wars a book that tries to recover a neglected socialist political tradition in the West? Should contemporary anti-war movements look to socialism as a necessary part of their project?

As for socialism itself, I certainly think it’s possible to imagine a society that is far more democratic and egalitarian economically than is our increasingly stratified society today. But I don’t think the recipe that socialists of that era were working from is sufficient. I would love to see a society that had far lesser disparities of wealth than we have today, but that still harnessed the entrepreneurial spirit. Just how we get there, I don’t know.

Nor do I think creating the good society of this sort would necessarily be a guarantee against war. Every conceivable kind of society in history has waged war at one time or another.

Your narrative vividly captures the significance of the Russian Revolution for the Western anti-war movement. I think this reality has been very much lost in popular understandings of the war today. From several of your protagonists’ points of view, the revolution was an anti-war revolution, because it marked the exit of Russia from the war. Were you struck by this part of the story?

You’re right, both 1917 revolutions in Russia were seen in the West, and by some who took part in Russia, as anti-war revolutions. It’s easy to see why they generated so much enthusiasm among Western anti-war types. I’ve long had an interest in Russian history, something I indulged at book-length in my 1994 book, The Unquiet Ghost: Russians Remember Stalin. One thing that has always fascinated me is how many otherwise intelligent Westerners were besotted with enthusiasm for the early Soviet Union. Certainly the revulsion against World War I was a part of that, although there were many other motives as well.

As you show, prior to the war hundreds of thousands socialists and labor-types really believed that workers would never fight one another. Were they foolish to think this way?

Yes, they were naively idealistic. I think they far underestimated the appeal of tribalism among nations, and the ability of governments to manipulate that feeling to get the populace to support unconscionable wars. That problem is still with us today.

In many ways, your book is a story of bold social experiment. Many of the protagonists are dedicated to novel visions—from women’s suffrage, to workers’ rights, to free love, to collectivism. Yet when it comes to military strategy, your story is mainly one of stultification, of failure of vision, of a kind of worship of the past. Do you think that there is a relationship between the failures of strategic vision that you identify in the English commanders and their political and social conservatism?

Yes, I think there is probably some connection between conservatism in military strategy and in politics. However, in most societies at most times, people in power are loath to give up or devalue the pathways by which they got there. Despite novel weaponry, the same thing exists today. Putting aside for the moment the question about whether we ought to be fighting our current wars at all, and just looking at things tactically, drones have made fighter planes obsolete. But what Air Force officer wants to junk all our fighter planes? None. This is the pathway through which the leading Air Force generals rose. I think that’s rather analogous to generals being attached to the similarly obsolete horse in World War I.

The Second World War is—at least and especially in the United States—held up as the “Good War,” in sharp distinction to the Great War, the “Bad War,” the unjust war. Would you write a book about WWII? Would it be an anti-war book in the same vein as To End all Wars?

No, a book I did about World War II would be somewhat different in spirit. I don’t think of it quite as the Good War, though, because so much bad came from it. It did stop the Nazi conquest of Europe and the Japanese one of Asia, and that was a good thing, but it didn’t stop the Holocaust, it led to oppressive Soviet domination of all of Eastern Europe, and it killed some 60 million people. Still worth fighting? Probably, because I think Hitler and the Japanese might well have killed still more—see Timothy Snyder’s recent book Bloodlands, and what he says about Hitler’s quite explicit plans to let some 30 million Slavs starve.

Amid numerous differences, I see certain similarities between Baker’s book and To End All Wars—the careful and dramatic presentation of rather shocking facts about the conduct of the war.

There are indeed a lot of shocking facts about World War II that could be presented, although on balance, had I been alive at the time, I think I would have fought in it—and in retrospect today still think that would have been the right decision, though not without having some doubts.

Why did you write this book now?

I would have written it 20 or 30 years ago if I could have figured out the right way then! It’s been at least that long that I’ve been fascinated with the subject. I wrote it now only because it was now—or, rather, when I started writing it half a dozen years ago—that I finally figured out how to tell the story. That being said, I hope the book does have particular relevance to the senseless and unnecessary wars we’re in today.

Jeremy Kessler is a doctoral student at Yale Law School and Yale University’s Department of History, where he writes about the history of conscientious objection. His non-academic work has appeared in The Daily and The New Atlantis.

Why are so many migrants here in the first place?