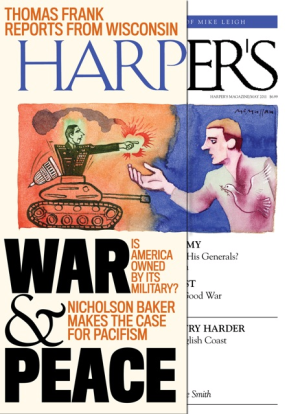 Anyone who makes even a modest habit of speaking out against war in public soon runs up against the inevitable, supposedly unanswerable question: What about World War II? (We have a whole category devoted to it.) It’s meant to be the ultimate stumper. This was the “good war,” wasn’t it, the war waged by the “greatest generation” against the evil incarnate of Hitler and imperial Japan? There was simply no other choice before the forces of goodness and truth but to leap into the single most deadly undertaking in all of human history. Right?

That won’t work if you’re talking to Nicholson Baker. In an extraordinary cover story in this month’s issue of Harper’s Magazine, “Why I’m a Pacifist: The Dangerous Myth of the Good War,” Baker explains how learning about World War II was actually a big part of what made him a pacifist in the first place. “In fact,” he writes,

the more I learn about the war, the more I understand that the pacifists were the only ones, during a time of catastrophic violence, who repeatedly put forward proposals that had any chance of saving a threatened people. They weren’t naïve, they weren’t unrealistic—they were psychologically acute realists.

His thinking began drifting this way during the Gulf War, and continued to evolve through the sequence of American military operations since. In the Balkans, in Afghanistan, in Iraq, and in talk about bombing Iran, he noticed that World War II kept coming up. It kept being used to justify one war after another. Every new enemy only had to be painted as another Hitler to ensure public support.

By 2008, Baker published Human Smoke, a book that collects documents, newspaper reports, and notable utterances during the lead-up to World War II, revealing how determined the Allied leaders were to fight at any cost. But, because of its form, we don’t get much of his own voice in that book. “Why I’m a Pacifist” is a chance to hear more directly from Baker himself about how he came to the conclusions that he did about the war.

I was so thrilled with the essay that the moment I put it down I wanted more, so I wrote to Baker with some questions about what he’d said. Our exchange was as follows:

WNV: Why did you decide to write Human Smoke the way you did, and why now write about World War II again as you do in Harper’s?

NB: Human Smoke deals atomistically with the beginnings of the war because I thought that was a good way of conveying the confusion and sadness of what was going on. You have to pause and think moment by moment in order to feel the gradual disintegration of civil restraint. The book stopped at the end of 1941. The Harper’s piece mostly concentrates on events from 1942 on, and it’s an effort to take up one big question: Were the pacifists right in calling for an immediate negotiated peace?

WNV: Why do you say at the outset of the essay that you don’t expect most people to be persuaded? Is pacifism really such a lost cause? 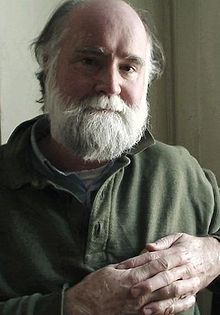 NB: No, pacifism isn’t a lost cause—in fact, most people, even generals and headbanging bar brawlers, act peaceably most of the time, or we’d get nothing done. “I’m not going to kill you” is basic to all cooperation. But during wars, pacifists are often in the minority and their arguments (so I’ve found!) make people really mad. Over time, these same people may and often do change their thinking, but it isn’t going to happen all at once. An inductive “nonviolent” approach to argumentation sometimes helps.

WNV: What do you think American pacifists can do now, or should have done, to stop wars in Afghanistan, Iraq, and now Libya?

NB: American pacifists made heroic efforts to end those wars, using every channel available. They deserve our thanks. Afterward, when more people acknowledge that a military attack was a mistake, it helps to go back and see who really understood what was going on. I find it incredibly moving to see how right they were. Being able to stop a war isn’t the only reason for protesting a war. You may fail, but you still want to get it on record that there was an obvious better way as it was happening. The objection to any war has to be steady and constant, and one way of objecting is to re-examine historical touchstones. I wrote Human Smoke and “Why I’m a Pacifist” to recall, as others have, that the war resisters of World War II offered paths out of the horror at the time. Their steadiness and belief in reconciliation can help us now. We need new heroes. I’d rather think about Jessie Hughan, Abe Kaufman, Dorothy Day, Rabbi Cronbach, or Vera Brittain than Winston Churchill.

WNV: What business does a novelist have to write on matters of war and peace anyway?

NB: Tell that to Tolstoy.

Exclusive interview: Why Nicholson Baker is a pacifist