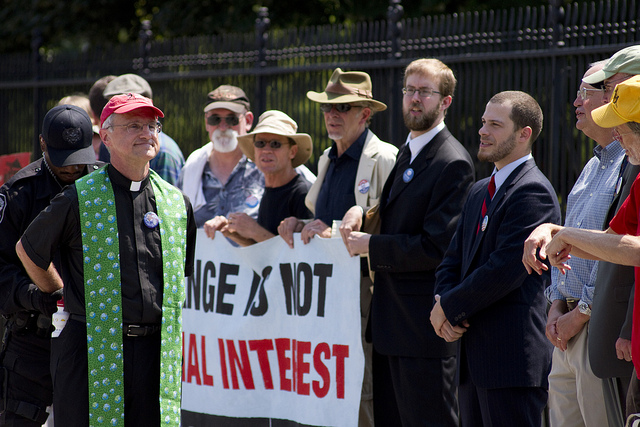 On Sunday August 28 the hearts and minds of America will be focused on our capital where a 30 foot tall granite statue of the Rev. Dr. Martin Luther King, Jr. is being dedicated.  This historic event – long in coming – is tied in a crucial way to a series of events happening this past week and in the coming days as well.

Many forget that civil disobedience was a major tactic of Dr. King’s.  Altogether, Dr. King was arrested over two dozen times.  In addition to championing civil rights – Dr. King also blew the trumpet on behalf of the poor and marginalized, and spoke out against war and nuclear weapons.

Each day since August 20, scores of activists have been arrested in front of the White House to focus attention on the consequences of a decision now on President Obama’s desk.  Obama has the power to approve – or stop – plans to build a pipeline that will transport Canadian tar sands through the heartland of America to Texas where it will be processed into oil.

The temptation to approve the Keystone pipeline is great.  Vast amounts of oil can be extracted.  But if they are mined and processed, those tar sands will become the second-largest “carbon bomb” to be released into the atmosphere, behind only the oil fields of Saudi Arabia. NASA climatologist James Hansen explained in a paper issued this summer that if we tap them, the emissions would mean it’s “essentially game over” for the climate.

Dr. King did not restrict his dream to the civil rights movement. He understood that, “We are caught in an inescapable network of mutuality, tied in a single garment of destiny. Whatever affects one directly, affects all indirectly.”

After my arrest on August 20 and spending three difficult days in the Washington DC jails with 64 other people of conscience, I am reminded of what Dr. King taught our nation about power.  In addition to eloquently speaking the truth, Dr. King’s non-violent protests convinced this country that we could change course, and build a better future together.

So as we honor the dedication of the Martin Luther King, Jr. National Memorial in Washington DC – and on the anniversary of Dr. King’s “I Have a Dream” speech – let us extend the dream to include our climate.  Dream with me:

Imagine what the 20th anniversary will be like. It’s August 28, 2031.  People the world over are celebrating “Climate Commitment Day”.  It marks the 20th anniversary of President Barack Obama’s speech, dedicating the Martin Luther King, Jr. National Memorial in Washington DC when he announced that he would NOT be signing the agreement to allow the Keystone XL pipeline to carry tar sands from Alberta, Canada to Texas.  On the 10th anniversary of that decision, the UN set aside August 28 as “Climate Commitment Day” – a holiday that has come to be recognized by all peoples as an opportunity to amplify national policies and personal practices that are in line with decreasing the amount of carbon in the atmosphere.  Although the amount of CO2 in the atmosphere has continued to rise steadily, people now recognize that Obama’s very public and courageous action – resisting the powerful oil lobbies and the materialist momentum to extend our addiction to oil – was the first of what became a growing series of decisions that he and other world leaders made in the interest of future generations. Imagine….

And for a moment, imagine the alternative:

It’s August 28, 2031.  Washington DC is in its 55th day of temperatures over 100 degrees Fahrenheit.  Just as hurricanes are named as winds reach a certain velocity, it has become our practice to name heat waves once a region has endured at least 20 straight days of temperatures over 100 degrees.  The names are chosen each year from a list of Presidents, Congressional representatives and corporate leaders who, since climate change was first discussed in 1989, had either denounced it or failed to make crucial decisions that would reduce its effects.  Each year, the longest heat wave is called “an Obama.”

Obama can choose between the dream of a world with a life-sustaining climate or the nightmare of a world of drought, desert, flooding, hunger, refugees and war.

Twenty years from now, every person alive will look back at this moment. If Obama approves the Keystone XL Canadian tar sands pipeline, his name will be cursed among the people of the world. If Obama says no to the pipeline, he will be heralded as a hero of human history.

Rev. Dr. Jim Antal is the Minister and President of the Massachusetts Conference of the United Church of Christ, the largest Protestant denomination in Massachusetts, and works with 350.org. He spent 3 days in jail as part of two week long civil disobedience protest at the White House organized by Tarsandsaction.org.

Why targeting corporate Democrats is part of the fight against Trump

6 creative ways to make your point at the conventions