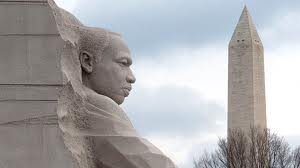 The forthcoming dedication of the national memorial monument honoring Martin Luther King, Jr., affords an opening for considering the complexity and meaning of his leadership. He was not the tamed and desiccated civil hero as often portrayed in the United States around the time of his birthday, celebrated as a national holiday. He was until the moment of his death raising issues that challenged the conventional wisdom on poverty and racism, but also concerning war and peace.

King was in St. Joseph’s Infirmary, Atlanta, for exhaustion and a viral infection when it was reported that he would receive the 1964 Nobel Peace Prize. As Gary M. Pomerantz writes in Where Peachtree Meets Sweet Auburn, this was the apparent cost exacted by intelligence surveillance efforts and the pressures of learning that Attorney General Robert F. Kennedy had formally approved wiretaps by the Federal Bureau of Investigation. His evolving strength as a leader is revealed in his remarks in Norway that December, which linked the nonviolent struggle of the U.S. civil rights movement to the entire planet’s need for disarmament. Noting that the movement’s most exceptional characteristic was the direct participation of masses of people in it, and crediting Gandhi’s influence on him, King’s remarks in Oslo were also his strongest call for the use of nonviolent resistance on issues other than racial injustice. International nonviolent action, he said, could be utilized to let global leaders know that beyond racial and economic justice, individuals across the world were concerned about world peace: “I venture to suggest [above all] … that … nonviolence become immediately a subject for study and for serious experimentation in every field of human conflict, by no means excluding relations between nations … which [ultimately] make war.” Telling journalists that he would donate the prize money to the movement, he returned home to engross himself in plans for the  54-mile march from Selma to Montgomery, which would be the last major surge of direct action for the movement.

King is sometimes associated with “principled nonviolence,” an approach based on moral constructions and philosophy, in contrast to “pragmatic nonviolence,” resting on grounds of practicality. In real life, however, these are not separate and independent paths. His ethical framework and his practical goals converged in a civil resistance of shrewd political astuteness. He knew that well-sequenced nonviolent sanctions can place adversaries in a quandary that they cannot solve through violence.

Today, across the world, people who have little or no familiarity with details about the civil rights movement know about King. He had not sought leadership for himself—it was thrust upon him. Once entrusted, he drew upon the full depth of his ideals, stature, and presence, of which he possessed more than possibly any other U.S. figure of the 20th century.

Notwithstanding his own preoccupation with his own shortcomings, he had the ability to accept others as they were and was ready to accommodate arrogance, rebelliousness, and egotism from some with whom he worked. His equanimity was remarkable in the midst of a true people’s movement staffed by impetuous and occasionally mutinous individualists.

The rapidity with which alterations occurred not only in the South but across the nation in attitudes, laws, mores, practices, statutory programs, and values can obstruct the perception that for most of King’s short lifetime he was struggling for the simplest, most straightforward recognition of full citizenship for African Americans. He was often attacked for moving too slowly or for not fulminating with outrage and militancy. He himself was well aware that three-fourths of the inhabitants of the globe were people of color, as he wrote in Stride toward Freedom, and understood graphically through trips to Africa, in 1957, and India, in 1959.

The unrealized dimensions of the deep yearning for justice that was embodied in the movement in which I worked for four years have been written about by many by now, and it is appropriate to consider how much remains unrealized and unacknowledged in the pursuit of racial equality. Yet it is also important to assess the fuller measure of King’s leadership: his quest had been for strategies that left no hostility and offered potential for eventual reconciliation. Indeed, usually without notice or news releases, the blatant signs, physical barriers, and customary accessories and protocols of racial discrimination quietly came down or disappeared in the United States. King, as had Gandhi, wanted no declarations of victory and sought to deflect any triumphalism. Mutual respect, he believed, could protect against white citizens feeling defeat or humiliation, while the black community could avoid temptation from what he called “the psychology of victors.” This appreciation of human frailty allowed him to prepare the groundwork so that the United States could continue laboring for a more perfect union.

Since King’s death, nonviolent direct action has ascended in political significance on every continent, yet civil resistance has remained underdeveloped as a political technique. Insignificant efforts have been made to increase our comprehension of its systems and logic, or how it works. Minimal research and planning has been invested to support its study, development, and fine tuning. This stands out against the vast assets allocated in developing and improving military and security studies, and the investments in refining the practices and procedures of representative democracies. It therefore falls to us to make nonviolent action “immediately a subject for study and for serious experimentation in every field of human conflict,” as he bade in Oslo in 1964.

Martin Luther King’s other dream is still not heeded