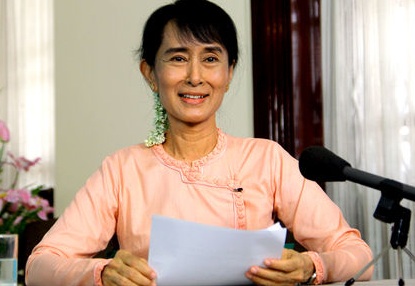 Ever since Burmese resistance leader Aung San Suu Kyi was released from her house arrest last year by the ruling military junta, I have been trying to understand why she hasn’t given the people of Burma any clear calls for acts of resistance. For Burmese people around the world opposed to the regime, she is an unparalleled source of spiritual authority. Lately, I’ve been thinking of this especially in light of her recent Reith Lectures, which were controversial for her statements that the movement may possibly have to be violent as well as nonviolent. Why would she say this? Is it a tactical threat to the regime? Or is it part of her grand strategy to embrace armed ethnic nationalities? Having been a part of the effort to rid Burma of its oppressors since the nationwide uprising in August of 1988, I took this as a shock. She hadn’t ever spoken quite like this.

The first thing to understand, I think, is that she’s addressing audiences both inside and outside of Burma—and mainly inside. In the lectures, she identified her cause with the full spectrum of dissidents—violent and nonviolent—thereby connecting with ordinary people, including the ethnic nationals, inside the country.

Right now, she’s walking a very thin line between the military and the pro-democracy movement. She could end up back under house arrest or in jail at any time if she does or says anything that causes people to mobilize or take action against the regime. She cannot speak directly to the people inside Burma to stage nonviolent acts. No domestic journalists would publish such a thing, for fear of censorship and imprisonment. The regime, however, allows her to speak with outside media for two reasons: first, there is tremendous international pressure to do so, and, second, ordinary people inside Burma will have a hard time even gaining access to them, much less use them to start a revolution.

Nevertheless, I believe she’s using speeches and interviews with foreign media to indirectly communicate with the people of Burma. But that isn’t to say that people inside the country are getting her message clearly. They probably don’t even realize that she’s talking to them. After seeing Daw Suu’s lectures at Reith multiple times, the question that came to my mind was this: how many people inside Burma are even aware of this, and how many actually got a chance to see or listen to her lectures? This is the only chance she has to speak freely to them.

To the outside world, she’s publicizing the poor conditions and challenges that dissidents and pro-democracy movement inside Burma have been facing since 1988. The majority of Burma’s 55 million people are barely surviving on under $1 a day, the country’s media is utterly controlled by the regime, and less than 2 percent has access to the (severely censored) internet. They have been gravely smashed by one of the most brutal, oppressive, and corrupt regimes in the world for many decades.

Meanwhile, she’s also reaching out to several generations of Burmese people inside the country, encouraging them to participate in this pro-democracy movement by following the paths of iconic and courageous dissidents and pro-democracy leaders. To this end, she took time to mention prominent leaders and members of the National League for Democracy, most of whom have been imprisoned multiple times, and spoke of the recent history of the NLD. This older generation stood against the regime and, despite all they’ve suffered, is still trying to. By invoking them, she’s reminding the Burmese people what resistance looks like, and that they should not be afraid to exercise their freedom. She discussed what drives a person to dissent, even knowing the sacrifices involved. She also spoke about the NLD youth who come to the office each day, reminding them that now it’s their turn.

And while she didn’t denounce the possibility of violence, she stressed that the movement’s true weapons are the fates of its people, and that their true armor is their passion—our passion. While she won’t disown those who have tried military options, what she calls for now is a movement built on something stronger than that.

With Daw Suu free again, and keeping in mind her reminder to keep working for freedom, I think it’s time for the Burmese pro-democracy movement to develop new kinds of tactics. We need to see the situation strategically, on a large scale, and formulate our tactics accordingly, rather than improvising actions on the fly. Daw Suu isn’t in a position where she can tell us what to do, specifically or directly. We have to figure it out for ourselves and act collectively.

There are many pillars that are supporting the military regime’s power in Burma, and we need to carefully and seriously study them, understanding their relationships and dynamics. More importantly, we need to find ways to educate and mobilize young people in Burma about this. How, at the individual and community levels, do we each help keep the regime in place? What can people do, both inside and outside Burma, to weaken its structure of support?

I have one idea, at least. Currently, I’m developing a project to bring thousands of low-cost radios to rural and remote areas in Burma, on which people can listen to broadcasts coming from overseas, thanks to networks like the BBC, VOA, RFA, and Democratic Voice of Burma. But there’s so much more that needs to be done. I hope that, for all the controversy it has caused, Daw Suu’s lectures will remind the people of Burma that the power is ours to take back.

Tim Aye-Hardy is one of The 88 Generation Students who helped spark and was involved in the nationwide uprising in 1988. Currently, he is founder of the Radio Project to Burma, director of outreach at Burma Global Action Network, and is the 2009 Carl Wilkens Fellow with the Genocide Intervention Network.