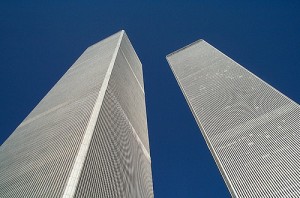 It’s a foregone conclusion that revenge ties itself in a logical knot. It’s a cycle that churns until everyone bound up in it is dead. With the 10th anniversary of 9/11 in mind, philosopher Simon Critchley rehearses this fact eloquently in his latest at his New York Times forum, The Stone.

The Sept. 11 attacks, which most of us remember as a series of visual images, repeatedly televised and published, originate with an earlier series of images. For Bin Laden, there was a strange kind of visual justice in 9/11, the retributive paying back of an image for an image, an eye for an eye. … The wheel of violence and counterviolence spins without end and leads inevitably to destruction.

Now, in no small sense, after 10 years of wars on terror waged against phantoms in ourselves and mainly innocents abroad, the United States’ eye for an eye has made the whole world blind—as Gandhi predicted. Fair enough. I think we knew that already, whether or not one is willing to admit it.

But then Critchley offers a more hopeful proposition.

Ask yourself: what if nothing had happened after 9/11? No revenge, no retribution, no failed surgical strikes on the Afghanistan-Pakistan border, no poorly planned bloody fiasco in Iraq, no surges and no insurgencies to surge against; nothing.

What if the government had simply decided to turn the other cheek and forgive those who sought to attack it, not seven times, but seventy times seven? What if the grief and mourning that followed 9/11 were allowed to foster a nonviolent ethics of compassion rather than a violent politics of revenge and retribution? What if the crime of the Sept. 11 attacks had led not to an unending war on terror, but the cultivation of a practice of peace—a difficult, fraught and ever-compromised endeavor, but perhaps worth the attempt?

I’m tempted to convene an art show, or call for an essay contest, or declare a hashtag. It’s a good exercise. A great exercise. On September 12, as Americans rallied around their leaders, only one response was made to seem possible or even conceivable: attack. Revenge. But that was a failure of imagination, the result of years and decades and centuries of practice with failed imaginations, which took bellicosity as the only response to tragedy. It’s not, though, and if we’re going to act differently next time, we’d better start practicing now.

So, what do you think the last ten years could have been like?

Can you imagine a different last ten years?