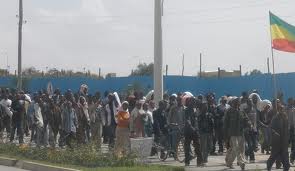 The Ethiopian government expelled an Amnesty International delegation from the country after it met with two opposition politicians earlier this week. Bekele Gerba of the Oromo Federalist Democratic Movement (OFDM) and Olbana Lelisa of the Oromo People’s Congress party were subsequently arrested by the government’s Federal Anti-Terrorism Task Force on Saturday on charges of affiliation with the Oromo Liberation Front (OLF), a group denounced and declared a terrorist organization by the ruling EPRDP party. Michelle Kagari, Amnesty International’s deputy programme director for Africa, states the following:

We are extremely concerned that the arrests of the two men occurred within days of talking with our delegates… This had nothing to do with their activities as a lawful registered political organization.

The silencing of political dissent in Ethiopia by the ruling party of Prime Minister Meles Zenami under the rubrick of “anti-terrorism” measures is becoming increasingly expedient and troublesome. In June, police arrested two journalists alleging that their reporting was sympathetic to groups officially deemed by the government as terrorist entities.

However, talk of nonviolent resistance and mass mobilization in order to topple an oppressive autocracy is rife in Ethiopian popular discourse, especially in the light of recent regional North African rebellions. However, there are many who deny the relevance of nonviolent insurrection as a legitimate reality as it applies to Ethiopia, citing several reasons as to why the country is a peculiar exception. Jawar Mohamed, in an article published earlier this year, addresses in detail the argument of “Ethiopian Exceptionalism” and provides in-depth analysis and strategical insight as to how the nonviolent struggle in Ethiopia can effectively be waged. While outlining the specific strengths and weaknesses of the current regime and using them as a basis from which the nonviolent movement can garnish support in the development of specific tactics and strategy, he also highlights the vulnerability of the movement itself (i.e. ethnic, religious, regional stratification) and provides recommendations as to how these seemingly divergent elements of Ethiopian society could collaborate in a unified front of nonviolent force. One of the conclusions of his thesis is as follows:

Commentators are debating whether the Egyptian, Tunisian, Libyan or East European model should be adopted in Ethiopia. This is a misguided debate because no country can serve as a model for another. Due to differences in social structure, nature and strength of the regime, every movement must develop realistic strategies based on careful and detailed assessment of the realities on the ground. Strategies and tactics that worked in one country may fail in another.

It appears that the absence of a vibrant nonviolent movement in Ethiopia would give credence to the skeptics and cynics who deny the possibility of such a phenomenon taking root in the country. However, Abebe Gellaw, in his article entitled “Waging nonviolent struggle is a smart option to end tyranny in Ethiopia,” maintains that the void of massive nonviolent popular dissent is more a matter of education, or lack thereof, in the philosophy and application of nonviolence than it is a testament to the impossibility of such a movement. He writes:

One of the misconceptions that has seriously undermined the popular struggle for dignity and freedom in Ethiopia for so long can be partly be attributable to the fact that there are so many people who believe that nonviolent struggle has been tested and totally failed in Ethiopia. But in reality, nonviolent struggle is not only widely misunderstood but also untested in Ethiopia under Meles…. As we have witnessed over the years, none of these political parties have adopted strategic nonviolence action, which requires knowledge and awareness, as a means of challenging and dislodging the entrenched tyranny of Meles Zenawi.

Citing the works and philosophy of Dr. Peter Ackerman and Gene Sharp, Gellaw is keenly aware of the the historic strength and revolutionary character of civil disobedience and other tactics of nonviolent anti-warfare. However, what is needed is clearly a campaign of mass-education for and by the people of Ethiopia in the philosophy and practical application of nonviolent resistance to political oppression and tyranny. International organizations and advocates as well as individual proponents of nonviolence must also support indigenous campaigns within Ethiopia designed to elevate the consciousness of the citizenry with respect to this “force more powerful.” The Ethiopian Institute for Nonviolence Education and Peace Studies states that it:

will accomplish its mission by providing educational and research opportunities, and leadership development using in-person-training and distance education. To help facilitate such programs throughout Ethiopia and in the diaspora, we will collaborate with other organizations involved in peace-building work locally, nationwide, and globally.

While it is good and necessary to laud the recent successes of nonviolence and its wagers in more technologically advanced and Twitter-friendly places such as Egypt, we must not rest on our laurels and neglect the core task of no frills, grassroots education in less tech-savvy places such as Ethiopia where the violence and oppression is no less heinous. We need to be more creative and more trusting in the power of nonviolence’s humility and its capacity to effect radical change through and amongst the most impoverished and disenfranchised peoples and communities. Before we can truly and nonviolently engage in the battle for Ethiopia’s freedom, we must re-commit ourselves to the struggle’s most foundational imperative: education and formation.

Before we can “go back to the drawing board,” we need to have the courage, patience and determination to first “make the board”.  The discourse has begun and now action must follow. For in the words of Haile Selassie, “[t]hroughout history, it has been the inaction of those who could have acted; the indifference of those who should have known better; the silence of the voice of justice when it mattered most; that has made it possible for evil to triumph.”

Why the Russian Revolution actually owes its success to nonviolent resistance