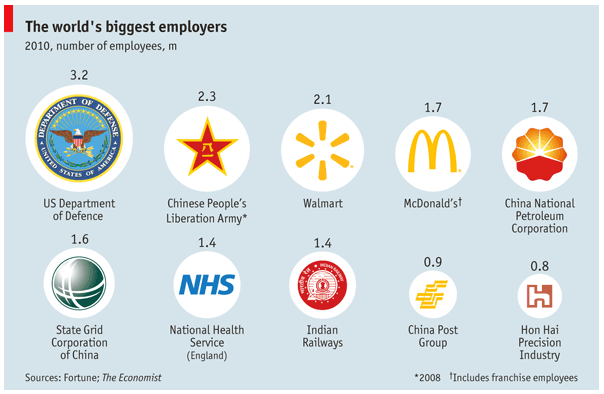 If you went to the Pentagon’s website a few years ago, you would have come across this description of itself: “We are America’s oldest company, largest company, busiest company, and most successful company.”

This new graphic by the Economist ranks the US Department of Defense as not only America’s “largest company,” but the largest employer in the world. (I would challenge the claim that it is also the country’s “most successful company,” unless you define success by number of people killed or area of land that is destroyed or poisoned.) 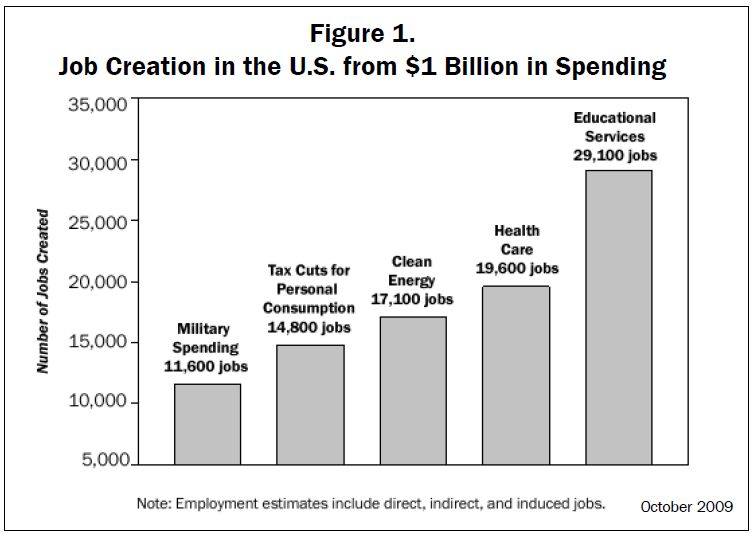 While proponents of military spending might cite this fact as evidence that cutting the Pentagon’s budget now would mean a massive loss in jobs, the truth—as I wrote yesterday—is that every dollar spent on war (or preparing for war) actually costs jobs. As William Hartung notes in a helpful fact sheet:

The question is not whether military spending creates jobs – it is whether more jobs could be created by the same amount of money invested in other ways. The evidence on this point is clear.

Hartung then explains very clearly why this is the case:

Part of the reason that military spending creates fewer jobs than other forms of expenditure is that a large share of that money is either spent overseas or spent on imported goods. By contrast, most of the money generated by spending in areas like education is spent in the United States.

In addition, more of the military dollar goes to capital, as opposed to labor, than do the expenditures in the other job categories. For example, only 1.5% of the price of each F-35 Joint Strike Fighter pays for the labor costs involved in “manufacturing, fabrication, and assembly” work at the plane’s main production facility in Fort Worth, Texas. A full 85% of the F-35s costs go for overhead, not for jobs actually fabricating and assembling the aircraft.

Therefore, were the “largest company” in the world to be downsized and the wars ended, we could have literally millions of new jobs in the education, health care and clean energy sectors. Not a bad trade off if you ask me.

Notes from an NYC Occupier in Taksim Square

How do you tell the kids that Grandma is in jail for resisting nuclear weapons?

The world’s ‘largest company,’ and its alternatives