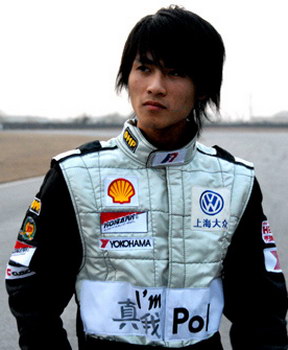 Han Han is a Chinese high school dropout who ended up penning a series of bestselling young adult novels. Since then, he’s evolved into an incisive political and social critic on his blog—famously posting a pair of quotation marks around an empty space after Liu Xiaobo won the Nobel Prize—and his dogged commentary on corruption and government wrongdoings have given him a credibility inside and outside of China that you wouldn’t expect from someone whose fanbase was once comprised mostly of teenage girls, or whose primary occupation these days is racing cars. He’s heralded at home as the next Lu Xun, one of China’s most important intellectuals and critics of the past century, and is so popular that he’s able to get away with writing just about whatever he wants (though especially hard-hitting posts often get deleted after the fact—but not after they’ve already been re-posted thousands of times over). With Evan Osnos’s fantastically nuanced New Yorker profile over the summer and celebratory articles over the past few years, some of us here in the U.S. might be swayed into thinking that Han Han is, like Liu Xiaobo and Ai Weiwei, one of China’s Great Democratic Hopes.

All of which might make it a bit surprising to watch Han Han, the voice of China’s youth, casually dismiss his fellow netizens’ online protests in a recent Channel News Asia interview:

After the high-speed rail accident in Wenzhou, I was reading all the accounts on microblogs. Subsequently, I kept checking downstairs, expecting hundreds of thousands of people to march in protest. But in reality, there was no one protesting. If you just focus on reading certain microblogs, you would imagine that the entire Chinese government and society had crumbled and that the country had sunk into anarchy. But then in retrospect, I realize that your sense of reality depends very much on whose opinion you follow on the Internet. […] So the microblogs you track can define the world around you. And none of it is real. Perhaps we need to wait for an entire generation, like mine, to grow up in an environment where information is free and open. That is when we might see real change in the arts and in the media.

Han Han’s comments on the illusory nature of online protest are seemingly shocking for those who expect him to fit neatly into their preconceived notion of online freedom fighter. But once one gets over the fact that he is not the next Václav Havel (Will Moss so aptly describes Han Han as “dissident-lite”) and accepts that he doesn’t have to make some sort of binary choice between government toady and activist martyr, Han Han’s observations (albeit simplified and imbued with his trademark impishness) do have grounding.

General consensus and empirical studies show that China, like most of the rest of the world, uses its Internet first and foremost for entertainment. Though the Internet has successfully bred and been used to organize a number of successful on-the-ground protests (with the 2007 rally against a chemical plant in Xiamen being a well-reported on and studied one), for the most part, Han Han is right: it’s the venue for mostly armchair protesters who comment, re-post, and mock from the comfort of their home or Internet bar. As Guobin Yang indicates in his essential The Power of Internet in China, the dominant mode of many young Netizens is one of playfulness, satire, and mockery, even when it comes to activism and protest. They are often only speaking to each other, generating play and humorous memes online with their open derision of a media and government that tends to treat them like children. Especially now with the rising popularity of Weibo, China’s equivalent of Twitter, dissent is often disconnected from the locality for which the injustice took place. Thus, in the case of the Wenzhou crash, hundreds of thousands of comments expressing outrage were merely that—expressions divorced from on-the-ground action. Thus, Han Han is correct in saying the online furor did not match the “anarchy” that he expected on the streets.

And yet, he has hope for the future. He acknowledges that his generation may not be the one to shrug off the shackles of the system they are currently forced to butt heads with. It’s a sentiment commonly echoed by Chinese internet scholars: China may not be ready yet, but it’s getting there. Rebecca MacKinnon, founder of Global Voices, wrote back in 2005:

[T]he Internet may also be enabling the development of “civil society” and public discourse around policy that could make a gradual evolution toward democracy more likely over the long run. Internet scholar Randolph Kluver argues that it is necessary to “put the impetus for change within China’s own cultural and political realities.” Rather than argue that the Internet will democratize China—which is an ideologically charged debate, impossible to prove, and depends on how one defines “democracy” in the first place—Kluver (2005b) chooses to advance the “less radical” and “less disruptive” argument that “new forms of civic discourse are emerging.”

Some Chinese bloggers have expressed the concern that an excessive focus by Western media on blogs as a vehicle for political dissent may be counterproductive, making the authorities more suspicious of the emergent new forms of online civic discourse than they might otherwise be. […]

Powerful socio-political change can be expected to emerge as a result of the millions of online conversations taking place daily on the Chinese Internet: conversations that manage to stay comfortably within the confines of censorship. With each passing day, these conversations do their quiet part to free the collective Chinese mind.

The idea is that the Internet in China, though not necessarily bringing the sweeping reforms and demands for free speech that activists might have hoped for, is still moving China forward in incremental steps. In this interview and in previous ones, Han Han acknowledges the limits upon him and his fellow youth. To expect his generation to rise up just because they have the tools to do so is unfair. At this stage, the very fact that a medium exists where citizens can express protest and not fear repercussion (the state can’t arrest all 100,000 people who vote in a Weibo poll) has altered the power dynamics between citizen and state, and that is reason enough to be optimistic.