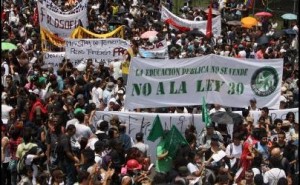 It’s the first time since 1990, when Colombians took to the streets demanding a new constitution, that the country’s students share a common cause. This time, they’re determined to defeat a bill that would further privatize the educational system. The movement has spread across Colombia, with tactics including the composition of new songs, hugging police officers instead of confronting them, and kissing each other while blocking principal city streets—known as besatón. These kinds of actions are similar to those used by this year’s Chilean student movement, which forced Chile’s government to negotiate and managed to paralyze the country for weeks at a time.

Last March, Colombian Minister of Education Maria Fernanda Campo proudly announced the need to reform higher education. Public and private universities took part in roundtable negotiations with the government in order to draft a bill that would integrate the different proposals. The bill eventually presented to the Chamber of Representatives in the National Congress the last October 4, however, seemed to many only to reflect the government’s interests, ignoring the previous deliberative process.

These are the bill’s features that the students find especially objectionable:

There are, however, even more reasons for the student movement to reject the bill and the government’s policies generally: the lack of autonomy that it will leave universities with; the increase of spending on war and defense, which is eight times higher than the investments on public education; and, finally, the approach to education not as a right or a public good, but as a product.

Students began with familiar tactics like occupations, graffiti, marches and strikes. But, later on, police repression and the movement’s growth across the country fomented more creativity and diversity of actions. During the last two weeks riot police expecting a mob were surprised with dozens of students willing to hug them. Other actions included spreading information about the bill in question through fliers on public transportation, flashmobs in malls, film screenings, open canelazos (a national beverage used historically to gather families and people around the fire) inciting public deliberation, national student assemblies and nationwide strikes.

Two large protests have taken place, first on September 7 and then again on October 12. Colombia’s mainstream media tended to report just the violence and vandalism of a small minority of protesters, as well as a Ministry of Education statement claiming that 98 percent of students were against the protests. But the reality on the ground seems to look quite different—closer to just the opposite, in fact.

The students have set a deadline for the Ministry of Education to withdraw the bill on November 10. Otherwise, they intend to block the streets of all participating cities. In the meantime they are trying to establish a stronger relationships with national labor unions, parents’ associations and high schools students.

So far, the government had tried to quell the movement by adjusting a few words in the content and form of the bill—but its basic project remains the same. These changes occurred right after President Juan Manuel Santos visited Chile. His visit coincided with the emergence of a strong student movement there, the fear of having to deal with a similar situation within his own country pushed his government to make small concessions. But the students and the academic community remain intent on the total withdrawal of the bill.

With local elections taking place on Sunday, the students are preparing two new tactics. First, they will add a fourth ballot in the municipal electoral round, in which people will be able to vote for the bill’s withdrawal. Second, many universities are organizing a “collapse operation,” saturating the system with writs for protection of fundamental rights and rights of petition.

Public universities joined the national strike weeks ago, followed by some of the private ones, but now the key to success appears to be guaranteeing the support from private-sector businesses. If the private sector understands that its ability to create new technologies and innovate depends on a well-educated workforce, it too will demand that a new bill be drafted, thus pledging its real commitment to Colombia’s modernization.