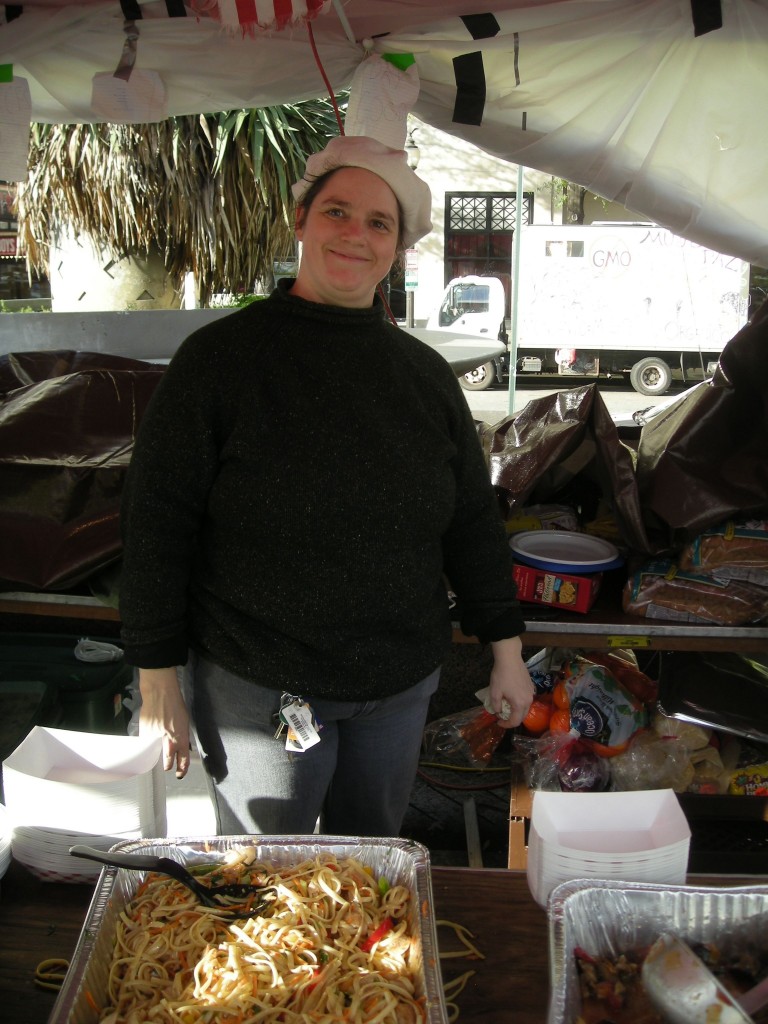 A fascinating yet rarely discussed feature of the DC-based Occupations in Washington, DC is the food tent. Over several evenings last week I talked with the incredibly motivated and dedicated managers/servers at Freedom Plaza.

“They say that the kitchen is the heart of the home, and that’s how it is here,” explained the food tent coordinators. “This is where everyone comes, and everyone is welcome.” They are right. On Wednesday night, there were activists, homeless people, bloggers, and passers-by who congregated at the tent at various times over a two hour period. It was fascinating.

The coordinators explained, “We get donations from everyone, in many different ways. Everyday we are surprised by who comes along with pizzas, fruit, money, or individuals who just rolls up their sleeves and gets behind the tables to serve.”

To the skeptic, this may appear a regular soup kitchen. But what I saw was a growing self-sufficiency coupled with an increasing base of supporters and contributors. During another visit to Freedom Plaza on Friday night, Popeye’s chicken and Au Bon Pain were available. Earlier that day, the farmers market across the street donated apples and other produce.

While private sector small businesses are making in-kind donations, regular citizens are volunteering their time to serve as well as provide monetary donations. The food tent resembles a slowly developing constructive program, a term Gandhi coined to denote the myriad of activities that he felt were prerequisite to carrying out the more overt and confrontational modes of nonviolent action.  The act of donating and volunteering at Freedom Plaza for short periods of time during the day may not constitute an actual act of occupation, but it is symbolic support and it’s helping sustain the occupation.

“What we’re witnessing is a process, a discussion. We are bringing parties together to talk,” explained an occupant as she handed out small flyers on Occupy Together. “People come up and talk with us, they’re enthusiastic, they want to help and contribute. This movement is in the stage of disseminating information. Before we get to real action, we have to have a conversation.”

And there’s nothing like a food buffet to bring diverse people together.  On Friday night I was just in time for a Popeye’s Chicken delivery.  My new friends at the tent served me a chicken breast, and I ate alongside two homeless men, and a blogger, and a former construction worker from Colorado. That evening at Freedom Plaza, social distance decreased among people of diverse cultures and economic classes, reducing the distinction between “us” and “them.”  Closing that social distance, not only between a victim and an oppressor, but also among like-minded supporters who can serve as a bridge, is important strategic alliance-building work for nonviolent social movements.  The Strategy of Nonviolent Defense explains this idea of the “counter offensive,” and notes that women are often best suited to close the social gaps.  And perhaps in Freedom Plaza, it is the small food businesses and restaurants that are helping close the distance between the protesters and the private sector. “We are not against business people,” one organizer said to me. “We support business, particularly small businesses like community banks, credit unions, and all the small restaurant chains like Z-burgers who have donated and helped us.”

Like the kitchen in many homes, the Freedom Plaza food tent seems to be the heart of the small occupation there and, you’re sure to find diverse characters and opinions. Here is an atmosphere that welcomes all the different interpretations of what’s wrong with the system, and how the occupation should address the problems. “Perhaps many people in the 99% are not out here, but we know they care and are listening,” said the young woman from Occupy Together as she entered her small tent for the night.

FBI informant Brandon Darby debates the activist he informed on

Cooking up an occupation